Sounds of the Seasonal Sewing Studio 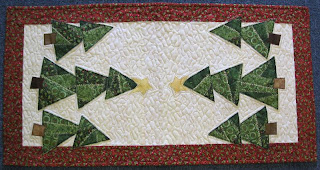 So lately I've been doing some writing for an upcoming pattern, and therefore much of my time in the studio has been spent at the computer with music in the background, and because it is officially December much of what I have been listening to is Christmas music. I find it amazing how little variety there truly is on the stations that play holiday songs 24/7, which is where Pandora is a godsend. Their "Contemporary Christian" and "Christmas" Christmas stations are delightful.

So because we all have our favorites and our least enjoyed songs of the season, I thought I'd share with you mine. Let's get the top three Songs Which Never Should Have Been Written And I Would Be Thrilled If They Died a Much Overdue Death out of the way first.

1. "I Want A Hippopotamus for Christmas." Really? Did a zookeeper at an underprivileged zoo write this? Because that is the only excuse for this piece of drivel.

2. "Dominick the Donkey". If I have to hear "EEeee Aweee EEeee Aweeee" one more time, I will not be responsible for my actions. It's like blue food, touching wool, and fingernails on a chalkboard all rolled up in one for me.

3. "Grandma Got Run Over By A Reindeer." It was extremely slightly amusing the first time. After that it was nothing but stupidity, and it needs to go away.

Who's with me? Anyone actually enjoy these songs? God love you. You are more tolerant than me. Granted, that may go without saying as you may have surmised, correctly, that I am rather opinionated.

My top five "Songs I So Far This Season Can Listen To Ad Nauseum and Not Be Tired of Them" are as follows. They run the gammut from traditional to contemporary, religious to sassy, and I hope you enjoy them. I'm also hoping the videos actually embed as I planned. Fingers crossed.

1. "We Need a Little Christmas" This song always makes me smile. It's happy, it's bouncy, it makes me want to run right out and buy a spinnet. This version is sung by the cast of Glee. It gives me a little shot of Christmas every time.

2. "Believe" by Josh Groban. Now, granted, Josh Groban could just stand on my front lawn for the day and that would be enough for me**, but any of his Christmas songs really just up his wow factor immensely. This one is one of my favorites.

3. "I Need A Silent Night" by Amy Grant. I first heard this song last year and it became an all time favorite immediately. It is a wonderful message, and something every mom can identify with this time of year. The video has some cheesy moments, but some of the photos are really cool and/or cute, and the lyrics get me every time.

4. "Baby It's Cold Outside" (Will Ferrell/Zooey Deschanel version). Truly, I love all versions of this song and always have. It's just a little bit of naughty mixed with the seasonal nice. Add in it's inclusion in the movie Elf, which is a family favorite, and it had to be on my list.

5. "Joseph's Lullaby" by Mercy Me. Joseph was quite a guy. It's hard to imagine being put in his position and not running away screaming. This song is just beautiful.

**Let it be known, however, that should Josh Groban break into a funky rendition of "I Want a Hippopotamus for Christmas" while standing on my front lawn, or of his own volition in the recording studio, I will renounce him. Big time.

So what are your personal favorites and personal cringe-inducers this time of year? I'm always looking for new music to brighten my season!
Posted by Beth at Quilting Hottie Haven at 10:20 AM

Of the less conventional, "The Christmas Shoes" by Alabama is one of my favorites (usually makes me cry) along with "Belleau Wood" by Garth Brooks. Madonna's "Santa Baby" makes me want to yack every time I hear it.

You asked for it! A family favorite is "Rusty Chevrolet" by Da Yoopers. A "Yooper" is a resident of the U.P. (pronounced You-Pee), aka Michigan's Upper Peninsula. Being a native of Michigan, it always brings a smile to my face. Watch it here: http://youtu.be/50IgzksUqpQ

TranSiberian Orchestra's Christmas Eve Sarejavo (actually the entire CD) - Love to blast it every chance I get.

Oh I heard Where are you Christmas? by Faith Hill the other day.. Wow.. what a beautiful voice. I haven't heard the first two of your terrible song list, but I think I would hate them just based on their titles alone. ha!