True Confession #1 - I've never participated in Project Quilting before, even though two of my favorite people in the quilting world, Kim Lapacek and Trish Frankland, run it. This possibly makes me a terrible, horrible, no good, very bad friend, but I hope the facts that I've followed along, cheered from afar, and even voted before have made up for my rude non-commitment to making a quilt in a week prior to this year. When Kim asked me if I might consider being a "celebrity sewist" this year and sew along for one of the weeks, I decided it was high time I participated and this way we both forced me to do it, which was clearly going to be a good thing.

True Confession #2 - I think the PQ logo thingy is THE CUTEST! So colorful and the CUSTOM FONT! I can never resist a good font. 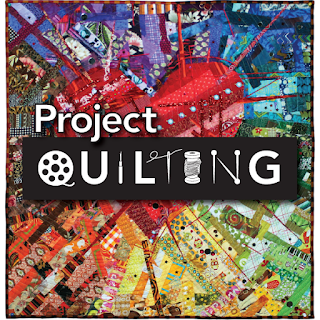 True Confession #3 - When the challenge of Red, White and Blue was announced, I died just a little inside. I honestly have never been drawn to red/white/blue quilts as a whole, in either all three colors or just red/white or blue/white. One quick glimpse at my social media feeds will show you that I tend toward brights and happy color combinations, and in the past I've had a hard time seeing red, white and blue as anything but Americana-esque and maybe a little bit more old fashioned than I personally prefer to create with - but THAT IS JUST ME. And a challenge is meant to be a challenge, so what is more simply and effectively challenging in quilting than making yourself use a palette you don't normally use? Not much. So it was like Kim and Trish created this especially for me, really. Plus, can we all agree that initial photo of the blue bike against the brick red wall is pretty darn stunning? It alone got me thinking of red, white and blue in a whole new, more modern way.

True Confession #4 - Though the rules state that the whole project, from inception to completion, must happen in this week, I thought of this design months ago, and knew that I wanted to pursue it and some others of the same size and theme later this year as a Christmas in July mug rug quiltalong, which I totally will be doing. I actually even made another one but gave it away for Christmas. But because I design in my head first, paper second, the prototyping process can take a bunch of tweaking, and the first one I made wasn't perfect. I'm still not sure this second one is either. But I did make some changes that I like, so it IS different, and I DID make the whole thing in the last few days. So there.

So, are you ready? I present my Santa Hat mug rug project, Prototype 2. Still not perfect, but getting there! It's a 7" square postage stamp style and was way fun to make! And quick! Because you may have noticed, it's not even Sunday and I'm done. Go me! 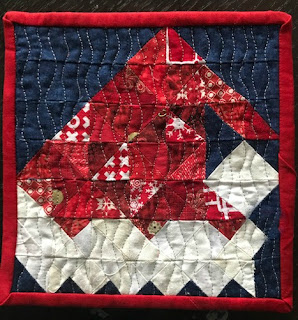 True Confession #4 - I did not notice that top right red piece of fabric somehow ended up in there with the white print of it looking like it's outlining the piece. I think we can all agree that looks stupid. But otherwise, I think the idea is coming along!

True Confession #5 - I of course made this whole thing using my Accordion Sewn HSTs technique, which you have either tried and decided it has changed your whole life like it has mine, have never heard of before, or are sick to death of hearing about. I hope most of you fall in the first category! If you are in the second, Google now! If you are in the third, I hope you can still stand me.

First I picked my fabrics, like we all did. I went with multiple reds and whites, but only one blue. I like a little consistency in the chaos, after all.

The best part of Accordion Sewn HSTs? IMO, it's when you tube them up and they make a little crown-like thing, suitable for wearing around the studio and seeing if anyone might bow to you. No luck on that so far at my house. 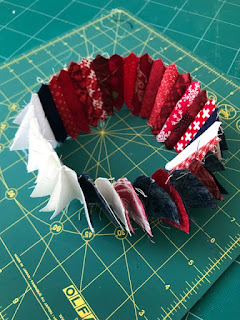 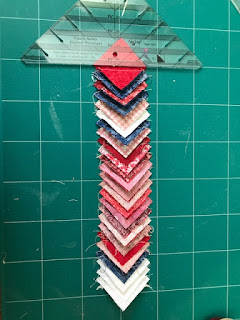 Cutting apart and trimming is THE BEST with the Clearly Perfect Slotted Trimmer, which you are also sick of me gushing over but is possibly even more life changing than the Accordion Sewn HSTs method, so I guess you're hearing about it one more time. 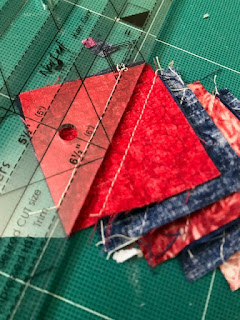 Once I had everything all cut apart and trimmed, it was really just a matter of laying it out the way I saw it in my head. In reality, it was a little too blocky at that point, so I added some Accordion Sewn QSTs (quarter square triangles) to give the "fur" part a little more dimension, with the red going into the white a bit and the background blue softening the edges of the bottom. I still am not sure I am finished with this design as it still looks a little choppy to me, but you get the drift. 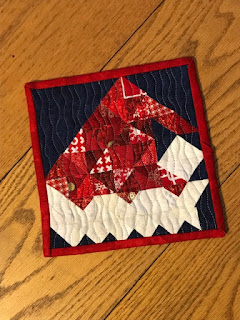 I'm sure you can notice, too, that I actually doctored up the first photo I showed you, because the bottom right of this one looks like a fish tail. I definitely did not like that look. I'm thinking in prototype 3 I'll replace the blue/white HST with a 1/4 white, 3/4 blue HST and see how I like it. For now, I used my very meager Picmonkey clone tool skills to fix it.

My favorite part of binding small projects like this one is the joy I experience when I find I can use one of my premade bindings I keep wound on empty spools in jars. They are there mostly because I made way too much binding on another project a long time ago. but waste, not want not! And I wanted not. This red binding was perfection. 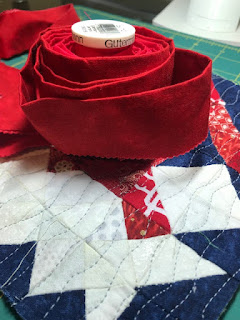 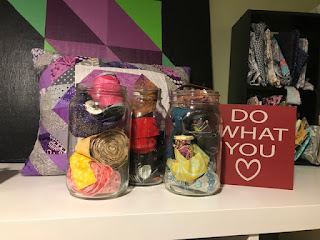 True Confession #6 - I may have quilted this with pale grey thread, which went against Kim and Trish's rules. For an all over quilting pattern that doesn't stand out on any particular color of a multicolored background, it's my go to and they weren't here to stop me. 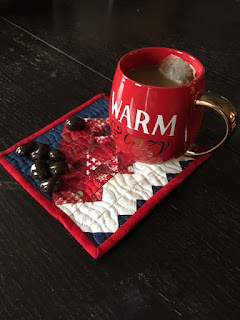 And check it out! It's just the right size for a cup of tea and a handful of chocolate covered cashews. Delightful!

I hope you have had a great time participating in Project QUILTING. I know I have! I'm so glad I finally was coerced into it; it really is amazing what you can get done. And the whole red, white, and blue thing? I am finding a new appreciation for the crisp edge it brings to the projects I'm seeing, and I already have some favorites that I can't wait to vote for. Great job, Project QUILTING Nation!


Posted by Beth at Quilting Hottie Haven at 2:22 PM

I am so glad I am not alone in my dislike of this color combo! I felt like a heel admitting it in my post...but, like you, I'm glad I embraced the challenge. Your project is adorable! I also chased the squirrel regarding your accordion half square triangles and can't wait to try it! I am not a scrappy quilter by nature, but am trying to do more with my scraps. I've found that limiting my colors (instead of throwing everything in there willy-nilly like my mom does!) helps, but still struggle with wanting things matchy-matchy. This technique can force me to do a little less of that worrying! Now to get the parade of cats taking naps to give me back my lap...

I’m intrigued by your method & am going to have to research it some more. It usually takes a few reading sessions for my brain to figure something out! LOL I love the pattern of the Santa’s hat, it’s a fun pattern!

first - the challenge is all TRISH! I have nothing to do with the theme! I will admit as well that my heart sank a bit as I saw red, white and blue ... but THEN I saw the photos she sent with the challenge and the bike gave me hope! I push myself so much with challenges I don't love that I have found that usually the ones I don't want to do come out the coolest ... although the jury is still out on that one!

And - it's totally ok you had the idea in mind before the challenge came out! That's part of the fun of PQ - it gets you to actually DO something you've been thinking about doing but haven't taken the time to do.

I'm really glad you joined in the PQ fun and I love your adorable project. I hope you join in again but I'm also cool having you as a cheerleader ;)

What a FUN project! I had never heard of your HST technique, but had trouble with the link. :o((