"I Won't Buy Any Fabric Until I Use What I Have" - every quilter, every January

I've often said I'm a cheap quilter. To be honest, I'm pretty much cheap in a lot of areas, but since I've become a scrap quilt maven my cheap-ti-tude in the quilting arena has definitely magnified and become a little more obvious even to the casual observer.

DISCLAIMER: I will say, though, I will never become one of those people who saves selvages, keeps pieces less than 2" in area, or dumpster dives at the retreat or workshop for other people's discards. I have my limits of cheapdom and those are mine right there.

This winter, though, I did raise (lower?) my cheap bar slightly with a project that turned into a pattern I am calling "Yankee Frugal," being that I am a Yankee descended from the Mayflower itself and the quilt was made entirely from scraps and yardage from my stash. I had challenged myself to make a quilt without buying any fabric, and I did it.

Why such a challenge? Because every January you know you all pull out your soapboxes to start your rallying cries of "I resolve not to buy any more fabric until I use up my stash!" and while yes, we in the quilting business laugh heartily at these statements and wait to see who will fall prey to our mischievous ways of plying you with pretty things first, this year I wanted to see if I could actually make something from just my stash.

I've never considered myself much of a pink lover, but fabric stash and scrap bins can bring out some truths about you that you can't deny.


My go-to coordinate color for pink is green. Call me a sorority girl, call me a child of the 80s - and well, you'd be right on both counts, so I guess that's my excuse. In any case, into the basket of ready-to-sew scraps went the pinks and the greens, looking like a little sorority rush party. Call Kappa Sig and find someone with a fake ID to get a keg!

Foundation piecing the scraps on to strips of ugly fabric was my modus operandi for this quilt. I'd come up with the block a few months prior and had for a limited time given it away as a freebie block thank you for those who are members of my EvaPaige Quilt Designs facebook community, but now it was time to make lots of blocks. So I needed lots of scraps. In good news, I had lots of scraps.


The size of this quilt was pretty much determined by how much of the green polka dot background I had to work with and still be able to save enough for a binding, so I stopped at 12 and started playing around with layout possibilities. While the blocks themselves did create kind of an "X's and O's" secondary pattern when put directly next to each other, it also made the look too stripy to me.

I knew I needed sashing, but in my design world, sash is often a four letter word. I just have never been drawn to quilts with a very traditional "block block block with sashing in between" layout so whatever sashing I decided on was going to have to spice it all up. The simplest way ended up being the best, cutting sashing strips into multiple widths. It amazed me how much that made me like the sashing concept for this quilt!

A foundation pieced border of pinks sandwiched between a green fabric was the perfect way to border the entire thing, or so I think. You may think differently. As I always say, if you buy my pattern, you liked something about it, so feel free to change parts of it to suit your tastes; you can do so knowing full well I am not sitting there in the studio with you judging you. But wouldn't that be an amazing experience? Even when I'm judgy, I'm fun. 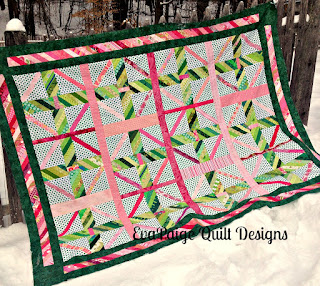 Even my backing was pieced from whatever I had laying around. It amused me to no end when a recent audience was all a-twitter over the pieced back, which to me looks exactly like someone pulled every big chunk of green or pink fabric they thought would be big enough for a back, sewed them together, determined it wasn't big enough, and kept adding more. Because that's what someone did.

Yankee Frugal has entered the morass of pink and green quilts in my current repertoire, and here's hoping audiences don't start walking out when I pull out yet another one. It's available on Craftsy and in my website shop, and soon to be available to the retailers everywhere. From my lips to God's ears, anyway!

In the end, I discovered that yes, one can indeed make an entire quilt, ne an entire pattern without once going to the quilt shop. But is that really the ultimate goal we should be making for ourselves? If I am to pull out my own soapbox, as much as we all want to use what we have, and we should, if we were to be serious about not buying more fabric until we used what we had, or not buy any more patterns, kits, tools, etc the industry would truly suffer. So set those goals of using what you have, but be open at all times to the pretty new stuff that will make your quilts sing!


Posted by Beth at Quilting Hottie Haven at 11:30 AM

Beth, your quilt looks amazing. I love how it all came together. It is hard to tell what is the blocks and what is the sashing. (BTW: Pink and Green is my favorite color combination.