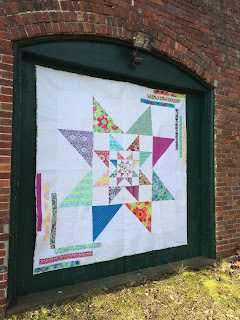 As if you hotties were not scintillating enough on your own, my latest pattern, one that I finally after almost a year of hemming and hawing got off my butt and released yesterday, has been named "Scintillating Stars." Scintillating, because that's as sexy a name as I would allow myself despite the fact that what I really wanted to name it was hands down amazing. It was also a name that would have caused half of quiltdom to reach for their smelling salts and immediately boycott my company due to the unladylike attitude of its owner.

So we stuck with Scintillating Stars. And I have to say, they are pretty scintillating. All that color! All those sizes! The cool border! Even the fun setting of the photo! 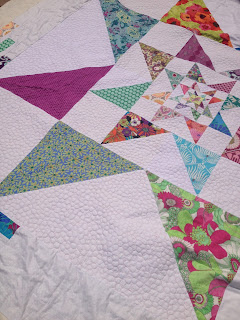 So where did this starry piece of wonderment come from, beyond the dark recesses of my overactive mind? After I made a triple star block for a swap several years ago, I became a bit obsessed with seeing just how many stars I could nest in a quilt, so one day I started nesting stars, using the biggest, brightest floral and polka dot fabrics I could find - no two fabrics in any given round of this quilt are alike, and I love it that way. I was kind of shocked and disappointed when five rounds was the largest quilt I felt comfortable with; I think a sixth round might have buried me in the studio for all eternity as it would have eclipsed the size of my available floor space, but it's pretty cool even with the five rounds. 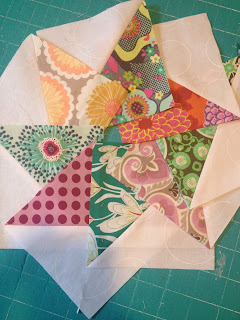 So by now, you are likely looking at this pattern, loving it, wanting to buy it, but also thinking "She said this took forever to release. Why? Is she kind of incompetent? It doesn't look THAT hard to write up." The answer to am I kind of incompetent is obviously "For sure, now and then I am a hot mess." The rest of the answer is more the three pronged situation of because I don't want the pattern to be a hot mess, because I pride myself on my directions, and because I've been in this business long enough to know that quilters who buy this pattern are going to want to make it EXACTLY LIKE THE COVER. I'm not yelling, just vehemently stating facts, a fact I can prove with several months of showing this quilt in lectures, being told I needed to release the pattern immediately, but that yes, quilters wanted directions to make it just like the cover. Which means eight fabrics per round. Which means a lot of specific cutting directions from each of several different sizes of yardage to get the most bang for your buck and the most variety in your stars. And THAT, my dear quilty peeps, was a big old pain in the butt. However, I rocked the heck out of it, if I do say, with diagrams that will make you shed a tear due to their beauty. 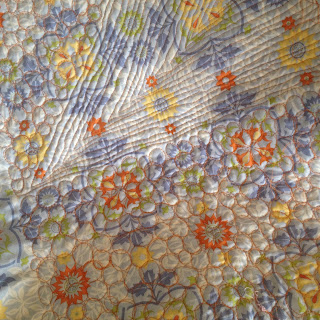 And bingo! The cutting directions in Scintillating Stars are written so that your stars will look like the cover - that is, eight different fabrics in each round of star points. If you follow them, you'll not only get your own awesome star quilt, but you'll use your fabrics the most efficient way possible. Should you want to go rogue and make the quilt with only four fabrics per round, I say go for it.


Adding a scrappy, strippy, asymmetrical border gave it a little punch and made it not just another star quilt. Could you add the strips in every corner? Sure! I just like to take the quick way out, and I happen to like things just slightly off kilter. It's possible you've noticed these things about me. 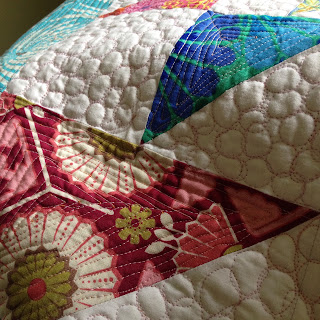 The quilting was mostly done in pebbles, with some narrow straight line quilting in the stars, the combination of which almost killed me. There were many, many days that I complained nonstop about how long the quilting was taking me. I ran a contest on my FB page one day to see if anyone could guess how long it took to pebble one of the largest squares in the quilt. (49 minutes. For ONE SQUARE! Now I'm yelling.) The problem is, once you start pebbling, you are committed. By the end I was ready to well and truly be committed.

Cover photography was stealthily taken on a side street of my town while I prayed no cops would arrest me for thumbtack marks in the door of an antique schoolhouse. Every quilt pattern has a little risk to the designer, and with this one it was my sanity and arrest record, but thankfully both remained clear at the end of the process. The schoolhouse was a building on the third grade "History of Pepperell" project my older daughters completed four years ago in third grade, but I had forgotten about it until a week ago, when I drove by and realized what a great backdrop it would make. As long as I don't get arrested for defacing public property, I'm sure I'll use it again. 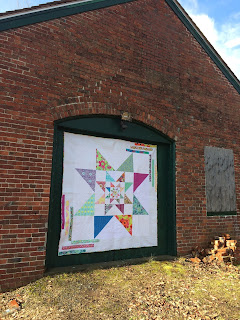 As a thank you to everyone who was so very very patient when it took me just under a year to get this project from start to finish, through Monday March 21, 2016, the pdf pattern is half price ($5.00) on Craftsy. Print patterns will be available just as soon as my printer can get them to me!


I hope you'll give Scintillating Stars a whirl!


Posted by Beth at Quilting Hottie Haven at 2:08 PM