Long time readers of this blog, all three of you, may recall that two years ago I wrote this post about my guild's biennial Secret Valentine gift giving extravaganza and the history of my gift receiving therein. Well, since it's another odd numbered year, it means another gift for me!

I was unable to attend the meeting last night due to attending the 4th grade chorus concert and 4th grade band informance, which for those of you who were not there and did not get to hear the definition of an informance no less than 6 times from the band director, is a way to show us what they have learned rather than try to wow us with an actual performance after only 4 months with instruments. However, be it only an informance, I was still quite wowed, I must say. Especially proud that my flautist Paige, who never wants to be the center of attention, raised her hand and totally rocked a solo of "Old MacDonald". But that is neither here nor there. It only means that instead of imbibing in cookies and seeing what everyone got from their Secret Valentines, I was enjoying the lilting sounds of "Major Duple" and hearing the words "informance" and "audiation" repeated more times in 30 minutes than I ever thought humanly possible.

So it was not until this morning that I was able to confirm that it was NOT in fact Doris L. who who was my Secret Valentine, but Terry R. I am kind of shockered, honestly. I'm usually so good at guessing these things. But either way, she gave me a lovely three block runner, and hand delivered it to my mudroom door, unbeknownst to her having placed the gift bag within 6" of where I had just thrown away a dead mouse. It's always an adventure here in Helfterville. 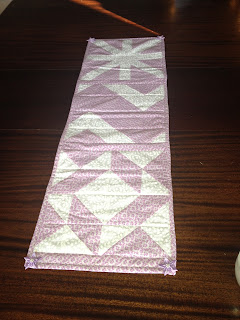 Greta immediately wanted to know why someone had given me a British flag. I'm thinking it's more of a snowflake, myself. It's a cute little runner and if you look closely you can see Terry added some silk flowers to the corners, maybe even using Jewel-it in my honor. I can't confirm that, though.

For my part, I made up a whole new project for my Secret Valentine, which I called "Flirtation." I've been in a scrap quilt making craze, and hadn't designed anything totally whimsical and in keeping with my "machine applique/embellishment/Jewel-it the hell out of it" style in a while, so last month I went nuts and changed all that with this cute wall hanging I made for Marcia. 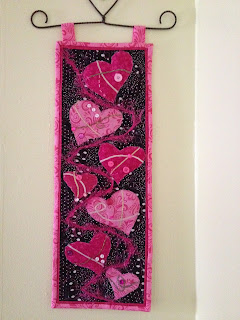 It's a small little project, but I loved the process of making it (all four hours) because it just let me let go and have fun. I even got to use some tools I hadn't in a while, like my Leaves Galore rulers (I cut wavy background strips with them), and I had fun with my iron on threads that I love so much and a little couching of a piece of eyelash yarn left over from a flip flop decorating project a few years ago. I am not a saver of other things, but I do save embellishments! Tons of little sparkly jewels and buttons complete the fun for me. 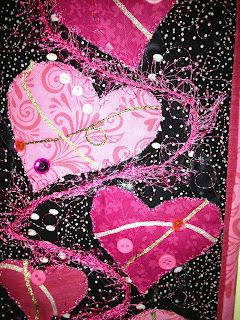 I thought it came out pretty cute, and when I was done I wrote the pattern up and threw it on my Craftsy site. I've actually sold a few, so I guess it has a little appeal, anyway. I'm thinking of leaving it as an exclusively downloadable pattern, but we'll see.

Back to my 90 minutes of sewing for the day. Today I am prepping for the big old snowstorm during which, if the weatherpeople have their way, we are all going to die, by finishing the quilting on the quilt I started yesterday and putting on the binding so I can at least flip that if we lose power. I'll be the one over here flipping and sipping (wine) while the winds howl and moan and the children experience their first real blizzard that they will remember. Since we only live 1/8 mile from school, they will not have to experience a 7 hour odyssey of attempting to drive home from school in a Pinto and never making it home at all that night like I did with my Dad during the Blizzard of  '78, but maybe they'll have a new tale to tell. As long as theirs doesn't involve the roof blowing off, I'm good.

Posted by Beth at Quilting Hottie Haven at 1:12 PM

Email ThisBlogThis!Share to TwitterShare to FacebookShare to Pinterest
Labels: Blizzard of '78, Flirtation

I love it! So cute and whimsical and totally you. :) Be safe during the blizzard, and stay warm under all of those quilts. Hey, what happened with your other heart project, did that magazine come out yet?

Here's to flipping and sipping but somehow, miraculously, with the power remaining ON. I must be an optimist…I picked up 5 movies today at the library!

I love your binding on Flirtation...does it have some sort of piping treatment?

I knew Doris L wasn't your secret valentine. She had my name and I got one of her signature necklaces. Oh and as the fates would have it, I had Terry R's name. Wonderful circle of SV's

Love your heart hanging! Hope you made out okay with the blizzard--did you lose power? Luckily we didn't.

Ahh, I understand. We live in South Louisiana and have a love/hate relationship with hurricanes!

Hope you survive the snow!

Love the heart and the valentine gift is marvelous!
glen in Louisiana