What I did with my September freedom

It's been three weeks since the kids went back to school, so I know you are thinking "Has she accomplished anything more beyond the daily dance of joy followed by lying on the couch eating bonbons in the pure, unadulterated silence?" Lucky for you, I have accomplished a few things and I will be so excited to share them with you. Thanks so much for asking.

1. Because my husband was threatening to shut down my basement studio on the grounds that it was a hazard to enter due to all the piles of paperwork on the stairs, my first job was to organize and file it all. Which, as you can imagine, was almost as joyous as a root canal. But it's done.

2. While on the husband-imposed organizing kick, I decided to organize my thread racks sort of by color, sort of by brand, sort of by which ones I use most frequently. There's nothing more satisfying than an organized thread rack. Or three. 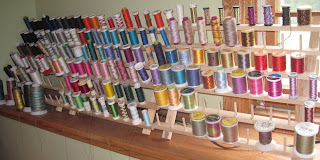 3. Sent out my first ever Constant Contact newsletter in September. Yeah, I know. That's hardly exciting stuff for most people. But for me, it was absolutely huge when my personally assigned customer service representative Carson (not Kressley, although that would have been awesome) reviewed my template before I sent it and said "I've seen some hot messes from first time users, but this one is really good." So exciting to know I've got him fooled with my mad computer skilz. If you didn't get on my distribution list and would like to be among the first to know what is happening in EPQD land, please let me know and I can fix that pronto.

4. Managed not to kill myself while dragging a 200+ pound, 5 feet long and 2 feet wide cumbersome package of 7 rolls of oilcloth and chalkboard cloth up one step and over 4 feet from my front step to the front hallway. Trust me, this may have been my most major accomplishment of the month, and I'm almost sad there was no one filming it for youtube. Look at these patterns! Aren't they delish? 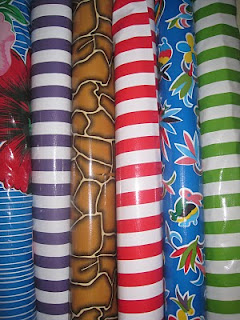 No, I am not planning to make raingear for 600,000 American Girl dolls, but good guess. My placemat pattern becomes mine October 1, and I'm busy cutting out kits so that quilters who want to try something kind of new and fun and great for kids gifts can have all they need right at their fingertips. And not have to drag 200 pounds of oilcloth off the front step to do it.

5. Acted as Chair and entire committee of the Silent Auction Committee for the Squanicook Colonial Quilt Guild show this weekend, Sept 24-25, at North Middlesex HS in Townsend MA. See the post following this one to check out some of the cool things you might win if you come by and place a bid. There's a lot more where those came from - and you guessed it, all 40+ items are sitting on the stairs down to my studio. I'm learning to just shut the basement door and avoid all the sideways glances and commentary from the peanut gallery.

7. Oh, and now and then I even got to sew! Some of it was sewing 729 Brownie badges onto vests, but still.

Posted by Beth at Quilting Hottie Haven at 12:58 PM

I hope you were exaggerating about the number of Brownie badges!