In a couple of days, I'm heading to Olde Sturbridge Village here in MA, one of the many living history museums in the USA where one can step back in time while wandering a village made to look like 1830 and rejoice that we no longer have to add Ye to the front and extra "-e"s to the back of all adjectives. I'm to be the featured entertainment at Cornerstone Quilt Guild's annual luncheon, which will be held in OSV's Tavern, which come to find out is not really a tavern at all and both the program director and myself are slightly miffed by this, as this will not be the weekend I get to give my lecture tipsy for the first time.

In any case, since the lecture is to occur at a "history place" as my seven year old history geek might say, and because it is to be my "Plays Well With Others" group quiltmaking lecture, I thought this morning "What better time to pull out those weird redwork blocks I bought from Ebony Love a year or so ago with historical themes and finally put them together? Because, you know, I only have twenty seven other projects going right now."

The blocks were redworked (in blue) by either Ebony or someone else, thus ensuring that if I put it together it will be a collaborative work, and are, in all honesty, a little strange. Obviously all of them are Colonial America themed, but some of them are downright crazytown. Observe.

I looked up some info about these blocks, as I was pretty sure they must have been designed by someone other than Ebony, who is not known for her redwork or for her whimsical depictions of Colonial America, and found out that they were originally designed by Ruby Short McKim in 1927. According to one source: "Ruby McKim's Colonial History Quilt, this pattern was originally featured in the Kansas City Star Newspaper. The newspaper sponsored a contest beginning in December 1926. Every week for 24 weeks an embroidered pattern was published in the Saturday society pages along with a description of each design's historical significance. The contest offered the winner $80 in gold. Women ages 19 and older were eligible to win first prize."

Would that I could find the actual descriptions of each design's historical significance. Then we might know the story behind why the maiden was angry enough to throw a tomahawk or why the goose hunter returns looking like a scarecrow. But unfortunately I didn't find anything on the individual blocks.

Admittedly, I didn't look very hard. I wanted to get this post up before the girls get home from school. In Colonial America, as now, honesty is the best policy, so there you have it.

Here are some more of my favorite blocks:

So with the lecture looming, I whipped all of these into an actual quilt top today, using every. last. bit. of what was quite literally the only red fabric I own. 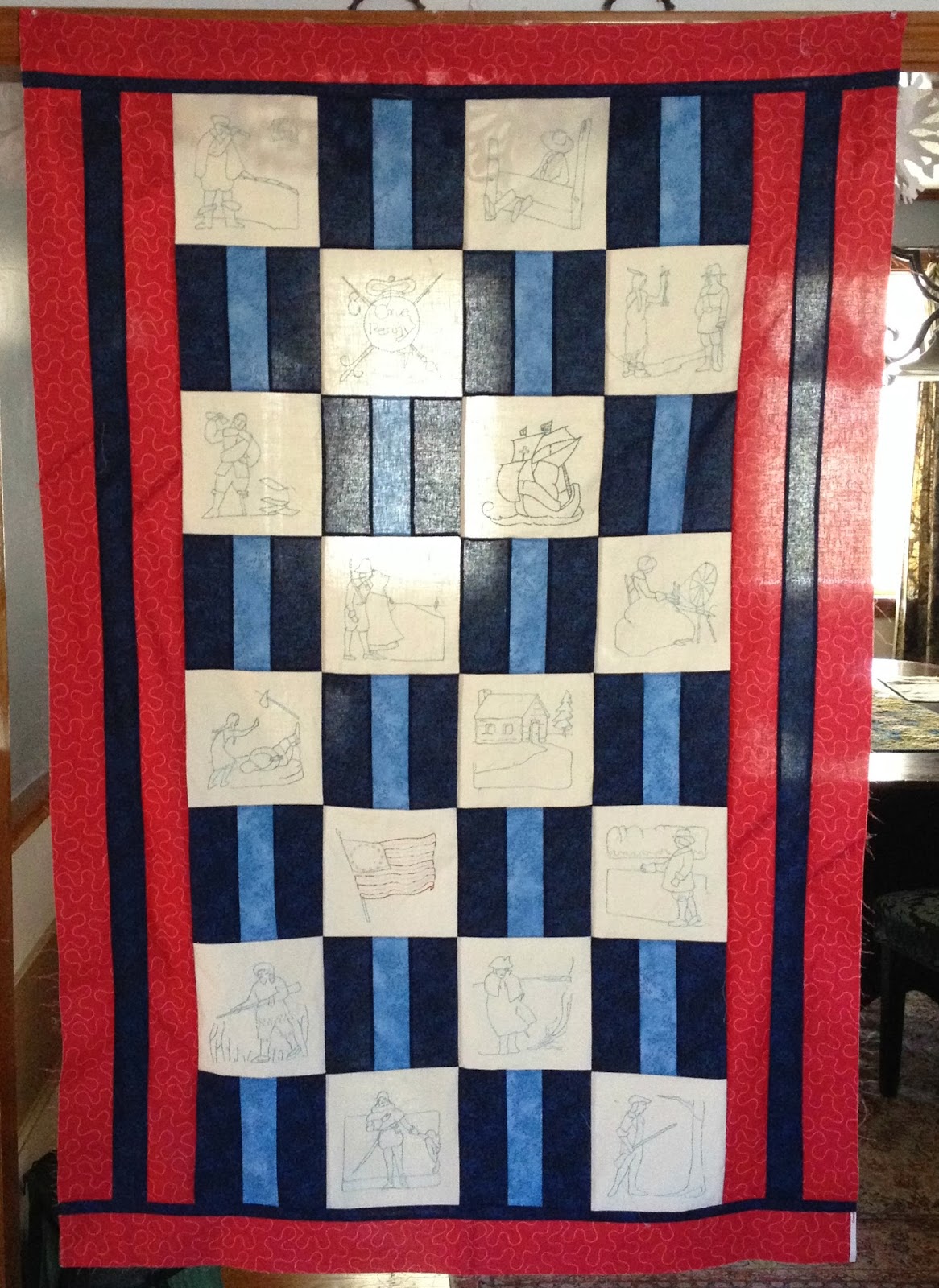 I know. It's almost impossible to see the actual redwork. But I promise it is there. As is that little bit of selvedge in the bottom right corner. It really was a fight to the death between myself and 3/4 yard of that red fabric, and the fabric won. I will be quilting this tomorrow morning and will be sure to put a binding on slightly wider than normal to compensate. 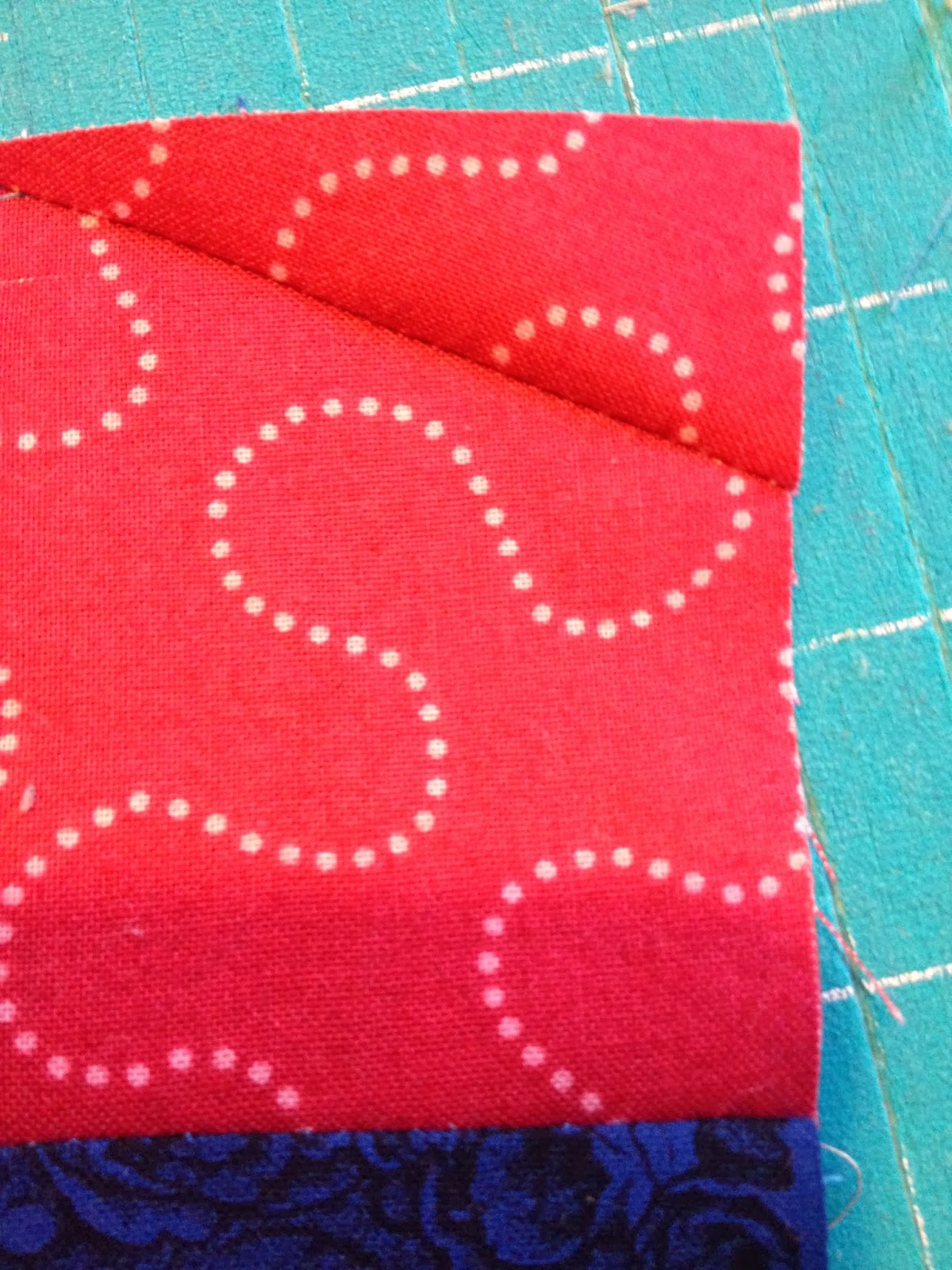 I was just about done when I realized that in a moment of crazed rotary abandon, I had sliced a bit of one of the corners off. I literally rooted around the garbage can for a tiny piece to sew on and make it square again.

Here's hoping Cornerstone will appreciate my efforts to bring them a history-themed group quilt. If not, at least my daughter will appreciate snuggling up under coins wearing French-inspired head wear and criminals hanging out in the stocks. Doesn't every kid dream of such things?
Posted by Beth at Quilting Hottie Haven at 3:11 PM

Thank you for the chuckles while reading this post. It was very entertaining. The hatchet one to me looks more like she is trying to halt the hatchet from an unknown attacker. Kind of like in Disney's version of Pocahontas she throws herself over John Smith to save his life. :) Either way, kind of interesting subject matter to say the least. :) And Kudos to your use of the red fabric! Pretty awesome!

Excellent post. Those are most interesting blocks. I do hope that a reader will be able to direct you to further information about them. Thanks for sharing them.

I love that you made it with red and blue fabric. Long live America! ;) You're right though, some of them are a little.. odd. I feel the need to google them now, too. haha

Did you see this site about her? http://www.mckimstudios.com/#sthash.mYEetGM2.dpbs

As a card-carrying member of Cornerstone Quilters, I know I speak for everyone when I say we can't wait to have you here in Sturbridge on Sunday! And the buffet is pretty amazing which is a bonus!

Bummer! No cocktails???? I think I'd have to pack a little bottle in my purse. Totally impressed at your ability to find the blocks, sew it all together so fast and get it quilted and bound before you go! Oh yeah...and write such a FAB blog post.

Love these blocks~~ can't say they match my childhood memories of Sturbridge Village, but the older I get the more I realize the history I was fed was not always what it seemed!