The other day I was cleaning up the family room - I know, I should make the girls do it, and on a daily basis I do, but now and then it needs that deep cleaning/ toss the crap extravaganza that only we moms can do properly - and I came across this, nestled in among some doll stuff. 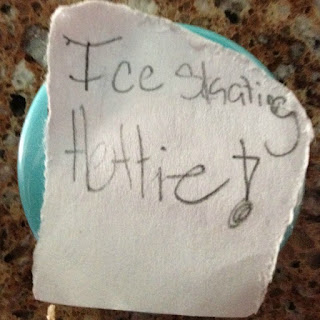 Clearly hottiedom crosses not only all sport and hobby barriers, but also that fine line that separates those of us who actually live and breathe and those of us made from the finest Chinese plastic.

While we all know I am not a proponent of perfection, I do have to say a pair of scissors might have been useful in this piece of crafty wonderment, but what do I know. Perhaps there were only seconds to get Julie or Marie-Grace out onto the ice and without this accessory being pinned to her her routine was doomed to fail. Hottie power indeed.

Those of you keeping up with current events on my facebook page have been getting a preview of some of the fantastic prizes I've been collecting from designers, shops, and other quilty businesses as I prepare to launch "Drop and Give Me Twenty 2013" in February. Also known as DaGMT, Dadgummit, or UFO Vasectomy. It's early to start all this teasing I know, especially when I am not a big fan of teasing you mercilessly, but no one can say I am not a planner, nor can they say I'm not excited to bring it back bigger and better! A couple of prize donations I've shared in case you missed them:

Both of these prize donations came about because Kay and Annelle were lucky enough to be vending with me at Bennington Quiltfest a couple of weeks ago, and were not quick enough on their feet to escape from their booths when I came to solicit prizes for DaGMT. Thank God I'm a nice person and a great salesman. Ha. I do have to say, though, that the idea for the event kind of sells itself (pat pat) and everyone I approached was really excited to participate and help out with donations.

By the end of December I will be creating a new page of this blog devoted solely to DaGMT, and you'll be able to see all the great prizes in one place and get yourself so spun up over the possibilities of participating that you won't be able to sleep at night.

In other news which will prove to you that I have actually become reacquainted with my sewing machine this month, I'm almost done with the top of a memory quilt I am making for a friend who lost her mom to PPOC, a rare form of ovarian cancer which also claimed my own mother. It's been a therapeutic way for both of us to slap cancer across the face and say "You may have taken our moms you greedy bastard, but you can't take our memories." Who needs counselors when we have fabric? One of the items she gave me was a barn jacket that had great pockets on the front that were well used by her mom. She really wanted those pockets on the quilt, so I took them off the jacket and was able to attach them to a piece of one of the skirts I was given. I'm planning to also scatter some of the prettier buttons off some of the clothing on the block too. 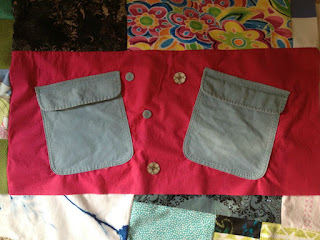 The whole quilt is coming out very nicely, and I promise to show it to you if Mary will let me when it is all done.

Meanwhile, we have a few more days until the entire world turns pink, so I hope everyone is sporting their Teal Toes. I'm all dolled up in "Marine Scene" by Sally Hansen after my friend Renae adult- booed me with a little package on my doorstep a couple of weeks ago. Love it, love her.

Go sew something teal. It is so much more than the color of gangrene!

Posted by Beth at Quilting Hottie Haven at 10:25 AM