Today was one of those rare days where there was ample time for me to sew instead of chasing my children around to their activities like a lunatic, and I put in almost four hours! Holy pretending to be Michelle, Judy, or Sue! Unfortunately unlike them I do not have an entire quilt top or seven to show for my four hours, but I'm terribly thankful to various other children for agreeing to playdates with mine today in order to allow this unprecidented amount of sheer quilting bliss to occur, and that in itself is accomplishment enough for me.

Anyhoo, I started today by heading out to buy some yellow dot fabric, and once I returned home I spent the remainder of my morning decimating my purple scrap pile. At first it was daunting to see how many purple scraps I had. Then it was daunting to realize that there are so many different shades of purple and not all were going to look good together and OMG I had to MAKE AN UNEXPECTED DECISION and I hadn't even had a second cup of tea yet.

I chose to go with bluish lavendery purples. Wouldn't you? They are so pretty after all, and yesterday when I was playing with all the blocks for the SNY group quilt those few that I had in those colors were always among my favorites. So there again. Decision made. 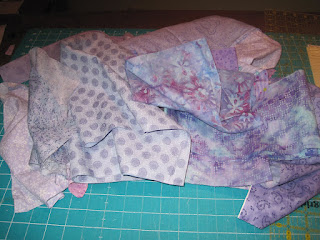 So what were my plans with the yellow dot and the bluish purpley stuff? I was jealous of how much fun everyone else had making the blocks for my SNY project, but I only got to make one. Plus I need a baby size sample AND I need a sample that has the blocks all totally and completely scrappy, so I combined all these issues into this new project. Because after all, DaGMT was all about finishing up UFO projects rather than starting a new one every day. But I made the rules and you can now all watch me break them at will.

This afternoon I did lots of chain piecing and realized that while the total scrappy/completely unplanned blocks are going to be so much quicker to make than the more planned variety which will also be an option in the pattern, wow it might have helped if I had planned a LITTLE by counting how many of each patch I was cutting. Because out of all 7 patches in each block, of which I would need 36 of each, I think I cut 17 of one, 22 of another, 9 of another, and so on. So in the end I was only able to make two actual finished blocks, with a bunch of pieces and segments left over. 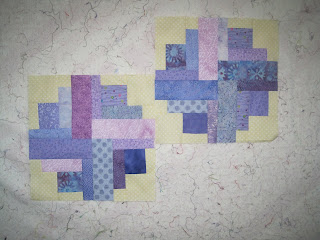 I do have to say they are pretty cute blocks, though. 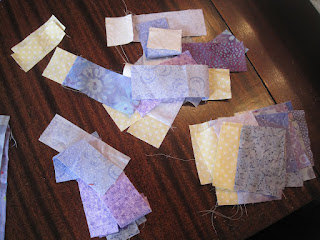 These photos should give you further proof that I did do a lot more today than it looks like I did. 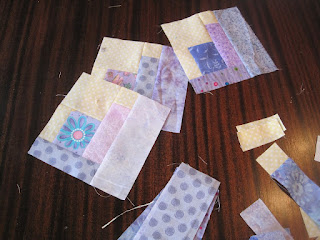 The machine has been moved to the Auxiliary Studio, aka The Dining Room Table, for the weekend. We'll see if that allows me to snatch a few moments here and there to whip up the other seven blocks before Sunday pm.
Posted by Beth at Quilting Hottie Haven at 4:06 PM

Email ThisBlogThis!Share to TwitterShare to FacebookShare to Pinterest
Labels: Drop and Give me Twenty, Scrappy New Year

I'm pretty sure I've done at least 20 minutes every day so far this month. My latest is the center block for a round-robin bee. I posted about it on my blog and added a photo to the flickr group. Now, a whole weekend to sew -- woo hoo!