Strike while the iron is hot, hotties. You know it can't stay this clean and organized very long. I give it until Thanksgiving, tops. Many, many thanks to my friend Jennifer Hannon, who uploaded 18 months of my photos off my camera onto her computer so that she could email me these few photos and I could share them here. Let's all say a little prayer that my laptop is actually fixed this week, shall we?

When I returned from Market, I had no choice but to follow through on the threat I had made to my family before I left that I was going to lock myself in the studio and not come out until it was workable again. I considered "before" photos, and truly you would have benefitted from seeing how horrific it was pre-massive cleanout, but in all honesty, you also would have never respected me as a person, if you do at all now. It was that bad. So as you are taking my virtual studio tour, I want you to just picture in your mind every item you are seeing in the photos thrown in the air into a massive wind machine creating a artificial cyclone in the room and landing whereever it wanted. My husband says that is a completely accurate description.

So here we go!

This is what you would see first if you came to visit me while I was working. If you were here to actually help me work, I would be thrilled to see you. If you were under 9 and here to ask if you could play on the computer while fighting with your sisters over the mouse, I would not be so much thrilled. But either way, your first view is of this ladder displaying some completed quilts. This is actually only 1/3 of a 20 foot apple ladder I got off of Freecycle several years ago and I love it. You'll see another 1/3 later. The final 1/3 is in my living room holding quilts we use on a daily basis. Don't you love being a party to my cheap decorating secrets? 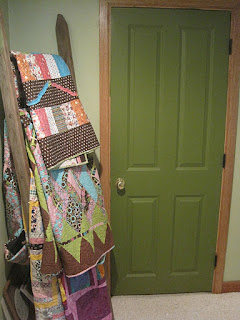 As for the door, that's just our utility closet. It's also where I deposited a ton of crap during my redo. In the words of Jim Carrey/Ace Ventura, "Do NOT go in there!" Trust me.

Immediately to your right as you turn into the room you will now find this cozy little nook where you can sit down and chat with me. This couch used to be against the wall with my Syncopated Ribbons quilt on it, and also used to be a depository for armloads and armloads of general stuff brought down to the basement and not put away. It also cut off my floor space, so I'm trying this arrangement for a while. I also have a basket of UFOs right there on the floor next to it in plain sight so I can be inspired to finish them. Pause for hysterical laughter. 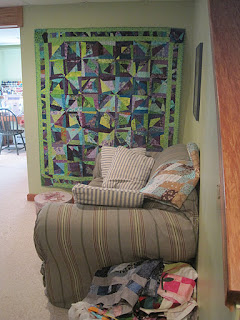 Right around the corner of that wall the quilt was hanging on in the last photo is my favorite part of my redo. My "scrap central" bookshelf, where I have organized all my scraps, which for purposes of redo were defined as "anything less than 1/4 yard in size that I think I might use again at some point for a scrap quilt before I die even if I truly have no idea what possessed me to buy the fabric in the first place". Each little tub is labeled with the color family within, so I can't get lazy and just throw them anywhere. Here you will also see some bolts and rolls and NQFs (non quilting fabrics) that I just know someday I will use, if only to annoy my children with their very presence when said children have to clean out my studio after they move me into a nursing home. This bookshelf used to contain my books (imagine that), some UFOs, some completed quilts, and I even found a quilt on it while cleaning out that I honestly thought was lost forever about two years ago. Total score. 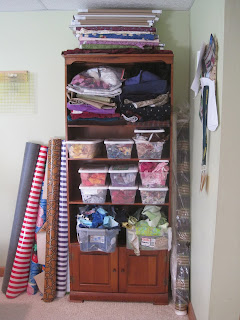 Here's my new and improved cutting corner. I used to have that little dresser at the front end of my awesome cutting table, which again messed with my floor space and ended up being another repository for random bits of stuff, and my pressing station was on top of the cutting table and took up way too much space. In a brilliant HGTV-esque space saving move, I relocated the dresser (which contains lots of tools like Mystifuse and pressing cloths as well as kit fabrics) over in the corner, stuck the iron on top of it, and gained a pressing corner and more room for projects on my table. My books are now on the little built-in shelf, and that half-open tub contains the remainder of my kit fabrics, conveniently located close to the cutting table for kitting. I used to keep all my fabrics in bins on the shelf under the table, which was truly a disaster at all times. I took them all out and redistributed them around the room, and am now using the shelf as a flat storage area for my quilts. One my daughter's friends saw it a few nights ago and asked if it was a little bed. I hadn't considered that I had added napping space to my studio, but hey, from the mouths of babes. 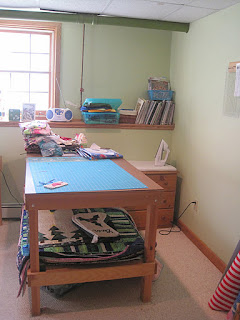 Here's where the magic happens. Machine, thread racks, design wall (created from a leftover piece of foam insulation from when we finished off this side of the basement covered with batting), and another ladder part, this one containing mostly quilts that are ready for a binding or quilting. I don't ever think about what might happen if that wastewater pipe ever burst. 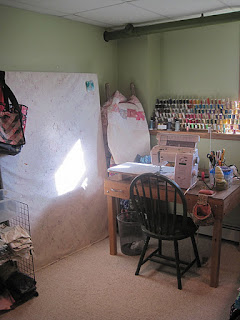 All of my "Bigger than a fat quarter but still probably not much bigger than a yard because I am the cheapest quilter on earth" fabrics are out of their bins and into these racks now and I love being able to actually see them. Each little cube space is big enough for four stacks of fabrics, and I tried to color coordinate as much as possible. In the process I discovered I own NO red fabrics. Apparently I hate red. Who knew? My fat quarters in this photo are in that blue crate; since this photo was taken I have removed them to a much more attractive organizer thing I bought at Target. But I'm too lazy to rephotograph. 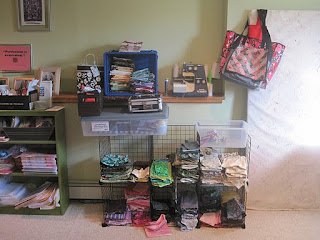 Pegboard full of random bits and bites. Had to share because I truly cannot look at this giraffe picture Paige drew in art class in Kindergarten without cracking up, which is why I keep it there. Frued would have a field day. 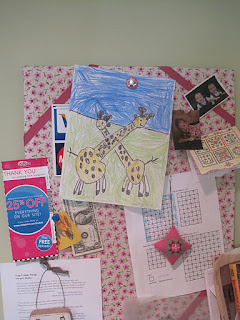 Our final stop in the tour, because you don't get to see my computer area to the left of this wall due to a file stack that is still unorganized, is my little wall of fame. Operative word is little, but it keeps me going when I get discouraged and need to remember that yeah, I've done some cool things so far in my career as EPQD and will do more in the future. 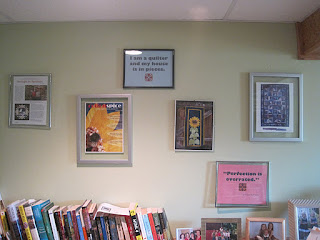 Many thanks for stopping by! I'd love to know some of your studio organizing tips, so sound off in comments if you like!

Posted by Beth at Quilting Hottie Haven at 9:30 AM

Oh, I love it! Mostly the picture of the giraffes, which I am sure you will show to a future boyfriend someday, but the whole room looks wonderful! Good job!

Thanks for the tour. You've given me a great idea for a pressing area. I just need to do the reorganizing. :(

Thanks for de tour! Thanks also for de clean studio. Much more fun to see. If I want to see a mess I just have to go into my own room! :-) I love your cutting table.