I truly love that you commandeered the pink "Quilting Hottie" button right off the person of my friend Linda Pearl at Keepsake Quilting yesterday. I can think of no hottie more deserving of his own official badge of Quilting Hottiedom than you. 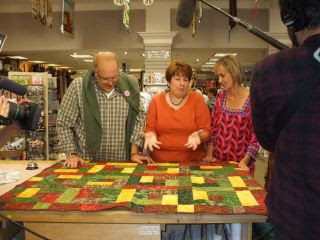 Love seeing you sporting it in this photo. Love that quilt too.

Clearly it is preaching to the choir to tell you that hottiedom is a state of mind. Just remember..... with great power comes great responsibility. And the power of the hottie button is great indeed. Among the many powers I have discovered:

- Wearing of the hottie button while picking up dinner at your local Chinese place will lead you to find an extra order of crab rangoons in your bag. It's certainly possible that you actually are bringing home someone else's food, but you will prefer to believe the button made you completely irresistable to the staff.

- Wearing of the hottie button when a boy scout arrives to sell you popcorn will lead to said boy scout asking his father as he walks away "Dad, what's a Quilting Hottie?" and allow you to hear the dad say "I'll explain later." And would you ever love be invited to that conversation, but sadly the powers of the button don't seem to extend to "fly on the wall" status. Yet.

- Wearing of the hottie button will inspire real quilters to real greatness, as in the team of walkers I'm so proud have adopted my pin to wear for their breast cancer walk later this month.
-Wearing of the hottie button will periodically cause you to be irritated that the state of Massachusetts only allows 6 spaces on their license plates, so QLTN HTY is not an option for your car, even though it would be awesome. (Of course, you will have to be irritated for me in this case. I have no idea how many spaces NJ has on their plates, but I feel you've probably already got a cool CUPCAK plate anyway.)

Wear it well, sir. I know you will.