It's basically April, which means I only have two more months left in my one-year-that-turned-into-two term as Block of the Month Queen for my quilt guild. Anyone who's ever held a guild office knows that once you are tricked into filling said office officially the holder of such an esteemed office it is a commitment you must take seriously. And what can be more serious than a BOM program run by me?

Imagine a guild with a president who never felt like showing up, a refreshment chair who passed around a bowl of oyster crackers and called it a snack, or a program chair who thought the height of guild excitement would be never ending games of Quilt-o every month. So too did I have to step it up and come up with fantastical blocks that would appeal to everyone, be easy enough for most but challenging enough to keep the interest of the more advanced, and always be keeping things fresh and interesting during my term as the BOM Diva (or whatever - we'll try out a few other monikers in this post and something might stick).

Like any office, fresh leadership is what keeps things fun, and I'm now ready to turn over the fun to someone new. My impetus for signing up to be BOM Maven in the first place was I felt we needed to mix it up a bit, and I feel like I was able to accomplish that goal to some extent, with only a modicum of grumbling along the way. Whoever fills my shoes may have another goal, and I look forward to seeing what theirs is.

But before I abdicate the BOM throne, waving my sepulcher around during my parting parade and trying not to bonk anyone on the head with it, allow me to share some of my favorite BOMs I created, curated, adapted, or googled my way into during my time in diva-dom. Seriously, if you can google, you can be your guild's BOM Chiquita.

For real, have you ever seen anything so fun? Maybe you have, but humor me. 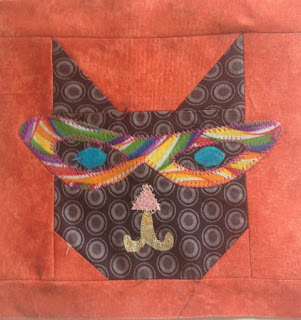 After packing Greta's lunch one day, I was inspired to adapt this cat block from a free block on the Janome website and a pair of glasses I drew freehand. BOM-ers were told to make the background orange, the cat parts black tone on tone and the glasses with fabric wild and crazy as they could find. Eyes, nose, and mouth were up to them.

One of my winners came to the November meeting with three skinnies made from the BOM blocks, one for each of her children who loves cats. The fourth child did not get one because she does not like cats. Her loss. 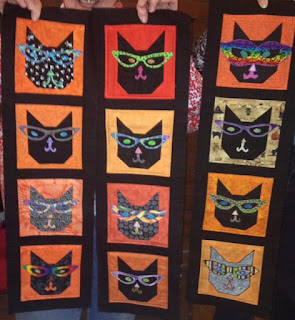 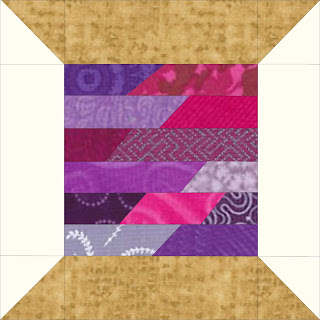 Spool blocks have been huge in the last few years, and it seemed easy enough to draw one in EQ, so with hours to go before the meeting one month (my usual method, by the way), I whipped this little baby up. Scraps being my thing, and one of my goals as FLOBOM being to make sure most if not all of the fabrics for participant blocks could come out of their scrap bins, I decided to make the thread variegated. More scraps made it prettier. 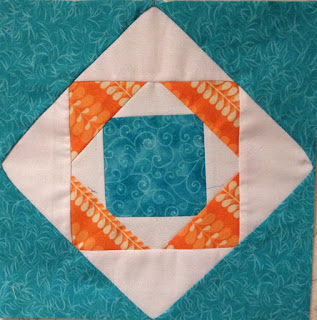 This was actually the first BOM we did together with me as the newly installed BOM Head of State. A friend had told me about the Exploding Block tutorial by Missouri Star Quilt Company she had found on line and called them addictive, and I decided it would be a great way to introduce my brand of BOM to my guild - a little less tradition, a little more color, a little more regulated as far as fabric choices because who wants to win a bunch of blocks with nothing in common? Even just keeping the background the same color helps, but sometimes I went a little more bossy. As was the case with this block.

As you can see, I chose white to be used along with teal and coral prints or tone on tones. Modern, cool, stunning.

Well hotties, you would have thought I asked them to make it in chartreuse and eggplant, for all the gnashing of teeth over what the heck did I mean by teal and coral and where were they supposed to find fabrics in these colors? It was rather comical to me, given that half my stash is probably these colors and they were all over the internet in quilts and all over shelves at shops at the time. So while we were still at the meeting where this block had been assigned, I looked out over the audience and called names of anyone wearing those colors and made them stand up. Did I embarrass everyone? Maybe. Did it get the job done? Absolutely. Everyone made stunning blocks and knew they were in for it with me as BOM Diva. 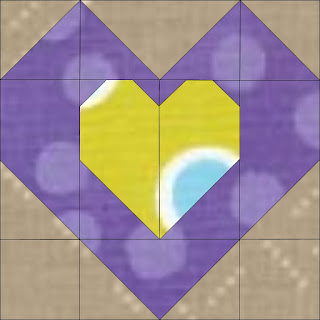 4. "My Dotty Valentine" - This tutorial for Amy Smart's "Be Good to your Heart" block was a quick and easy block for me to throw at people, because again it was like noon the day of the meeting and I had nothing planned. Participants were told to use grey background fabrics and any two wild, contrasting, and garish to the point of sunglass-needing-worthy polka dot prints for the two hearts.

If I thought Teal and Coral-gate 2014 was entertaining, Grey Governmental Overthrow was awesome. The amount of snide emails and remarks I got about the choice of grey was astounding, ranging from "Why? Why do you think this will look good?" and "ick. just ick."  and I read each with amusement while shaking my head thinking "I'm the boss, ladies. Deal." One woman adamantly refused to use grey for a background and told me so in person while handing off her blocks with bright blue backgrounds. Whatever. I didn't see her blocks get used in a quilt made by one of the winners, though, did I? Because they didn't blend. But if she was happier, it's all good.

The next February it seemed smart to go with something less heart-y. One can only make so many heart blocks, after all, so I drew up a little Scottie dog block and colored it to make it look like he was in a hoodie, told everyone to use red for the hoodie part, and voila! Valentines day in the Hood! 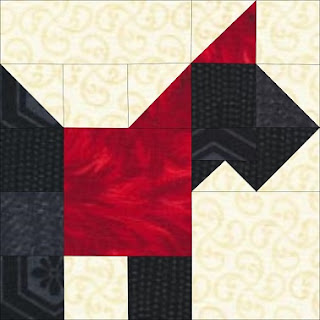 This one was pretty popular. I only wish I had a better photo of the gang. 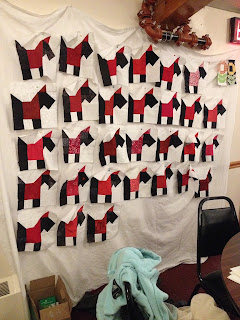 So, have I convinced you it isn't hard to be the BOM Executrix for your guild? Truly...if you can google, use Pinterest, draw a square, come up with a color scheme, or any combination of these skills, you are golden!

As I step down from my throne, I thank everyone in my guild who put up with me, showed enthusiasm, and made me feel like I was doing a good job. I know every block I received (even the blue backgrounded heart :) ) made me happy that you took part and I'll miss the job just a little bit. Because now whatever will I panic about at 11:58 am on meeting day?
Posted by Beth at Quilting Hottie Haven at 12:26 PM

Although I am the first to admit that I hate grey (oh, no- was it me?) I will also be the first to sniff back a few tears while waving 'cheerio' at your parting parade. You were the right person to shake things up! Hopefully your reputation won't prevent someone from stepping up! But NOOOO, it won't be me, ha ha!

hopefully you were not actually waving a sepulcher... maybe a scepter?? LOL!