That sound you heard yesterday? The one that sounded like we were under seige by a ginormous swarm of grasshoppers a la Laura Ingalls on the prairie? No need to duck and cover; that was just all 100+ of my Drop and Give Me Twenty participants firing up their machines at the same time.

The facebook page was ablaze all day long. I just can't keep up and like and comment on every post or I would never get any of my own stuff done. I was inspired at day's end, though, to create a poll, and check out these results.


Granted, it was a Sunday. Most people likely didn't have to work and therefore could spend blissful hours becoming one with their machines. Now that it is Monday we enter the real test period. Here's hoping they don't fall off the wagon that quickly. Also this is a fairly small representation of the group, and it is possible all the "Did Not Sews" just didn't want to embarrass themselves. But I'm still blown away. For my part I promise not to do a poll every day, but I think it was important to get them all hopped up, and also to give me a little ego trip. I mean really. Why not.

I pledged 90 minutes a day, one because I really need at least that long to roll all over my to do list, and two because I love to make myself crazy. February may be the shortest month, but it's also consistently one of the months wherein my daughters are in school on average two and a half days a week. If we are lucky. The other such months would be November, January, and June. Do they ever go to school, one may ask? The answer is me lying in a fetal position on the kitchen floor.

AND YET sew I must. EPQD will not run itself whether I am overrun by short people or not. I'm neck deep in two very active patterns in production and another is nipping at my knees. My amazing design wall is on overtime and the new shelving I bought may have changed my life. Three weeks in, and it still looks neat, tidy, and if I do say, quite pretty. There's really something to the idea of getting your stash up out of bins and off the stupid floor.

I'm so excited about both neck-deep projects right now. The group project I start each January and use to develop a new pattern is probably my most favorite I've ever done, and I really cannot wait to show it off. The layout is just my favorite thing ever and that is saying something, because the layout possibilities are practically endless. Every tester/participant who has sent blocks has made me drool with their gorgeousness. I believe there were 45 testers, so that's a whole lot of drool. I may need to mop the floor before resuming my fetal position later today, Snow Day #5 for those who are counting.

Aren't they cool? And oh so colorful! I'm just in love.
I asked testers to make me four blocks, at least one of which needed to be solids, as that is what I plan to use in the cover quilt. Most testers sent me four solid blocks, but a few went crazy and made me all tingly with the gorgeousness of these blocks on prints.


The solids layout will be up on the design wall just as soon as I get this other project off of it, which is scheduled for as soon as this afternoon. I love this project almost as much; it's currently unnamed but I'm leaning toward Grandma Dot. It's kind of a funky take on a Grandma's Flower Garden designed for my new lecture, "Give it A Scrap Slap." 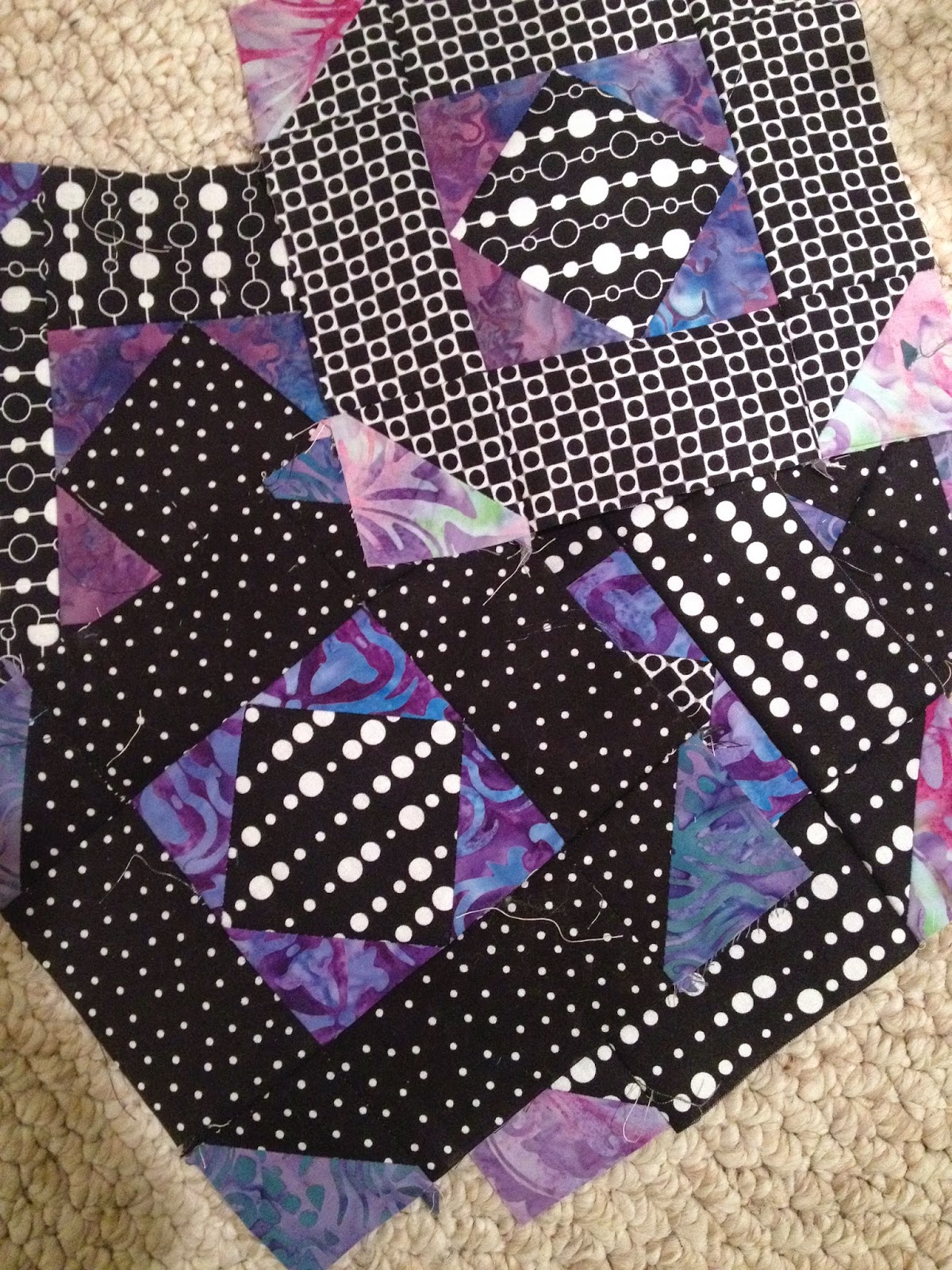 It combines several of my favorite things - a block with a little personality, putting batiks with cottons in order to blow. the. minds. of the purists, and teal and purple. Obviously fabric choices will vary with the pattern user, but I'm loving my own version thus far.
My 90 minutes for today won't sew themselves, so I must get to it. I hope you'll all join me in your studios as soon as you are done reading this!
Posted by Beth at Quilting Hottie Haven at 10:38 AM

Email ThisBlogThis!Share to TwitterShare to FacebookShare to Pinterest
Labels: Drop and Give me Twenty, pattern production, snow days