I've never seen the movie "Groundhog Day," but right about now, in the middle of a week wherein I need to make or procure 280 flying geese for my latest Scrap Squad quilt, I feel like I have an intimate knowledge of every aspect of the plotline.

That is not a typo. I did not add a zero. Two hundred eighty. For a girl who doesn't normally do flying geese, that's a whole lot of quilter-style pate.

I'm up to 179 as of tonight, but don't be all excited and impressed until I reveal that I only have actually made 90 of those in the last two days. Those who participated in the Happy Jacks group project actually had sent me some that I had left over after rethinking the border, and when I realized I had 49 of them in the pile I knew I would be stupid not to use them. Then my friend Angie, who appears here on QHH every now and then as a supporting player in my quest to bring you quality work, took it upon herself to whip 40 more up just because she was bored I guess. I'll be bringing her some wine to the guild meeting next week.

As for the rest, I'm using Triangles on a Roll Sew and Fold Geese. I was turned on to these papers, which are meant for braids and goose borders, when I was designing Happy Jacks, and Nedra at TOAR was happy to supply me with some to see if I could make them work for sewing accurate individual geese. I am happy to report that they absolutely can be used that way, and rather enjoyably at that.

True, there is a tad bit of waste of the papers, as you can only use every other one. But the trade off in fabric savings is huge as there is so little waste it is crazy; they barely even need to be trimmed. Plus in most normal flying geese-containing quilts, you probably won't make hundreds of geese. That's why I love the TOAR Sew and Folds especially for Happy Jacks, since you only need 72 geese at the most. With 6 geese per foot, and even only using every other goose on the paper, you'd still use less than half of the 50 foot roll on the quilt top. (That was a whole lot of math right there for me. Wowza.) Not bad for a $14 notion - and I'm both cheap and not a gadget person, so you know I must love these things! 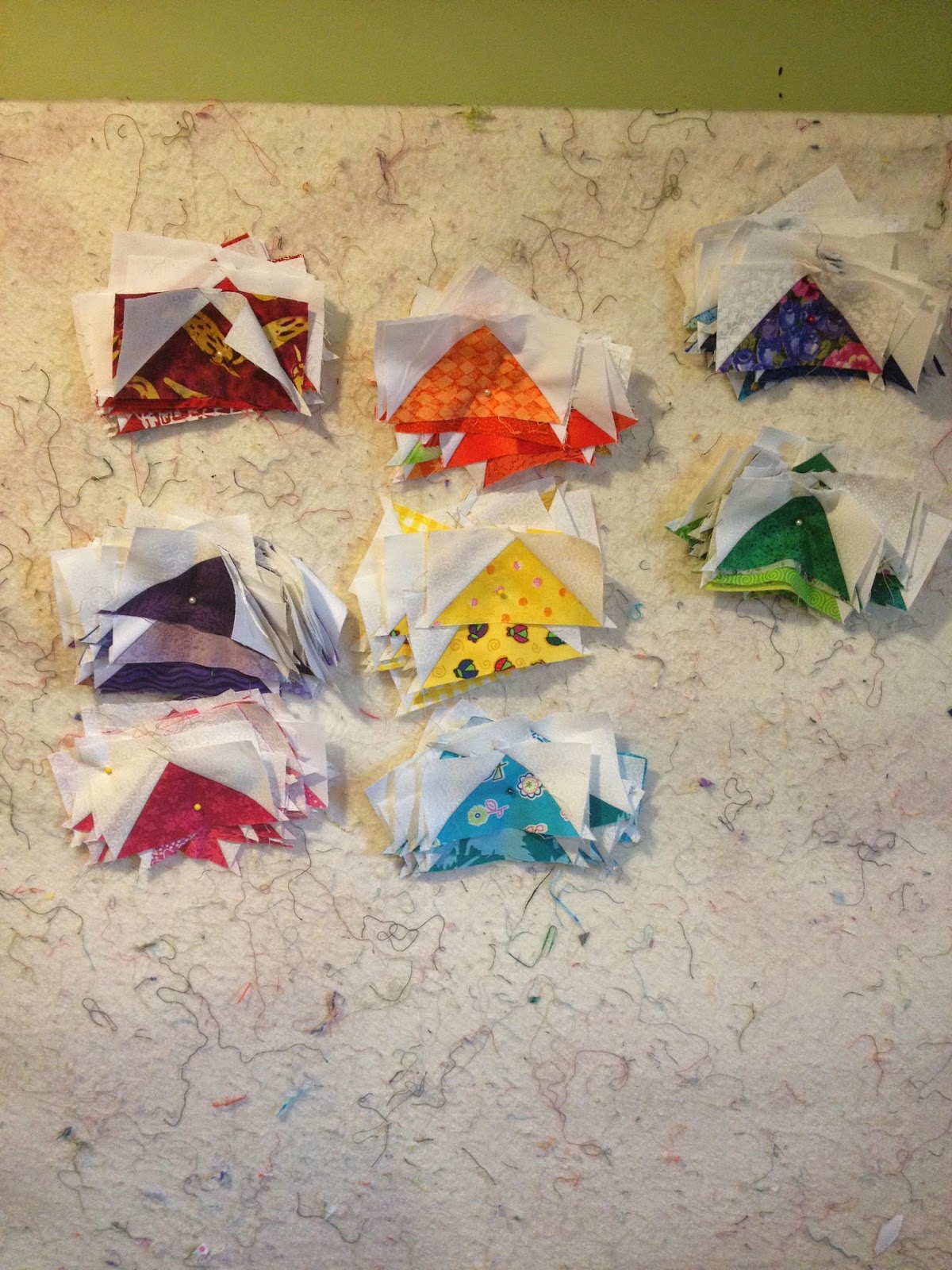 As of this evening, my design wall - and I will thank you to not mention the horror show of threads all over it - is home to my stacks-o-fgs, all grouped by color and each stack held to the wall with pins. I'm a little light on the yellows, but I'm not too stressed about it, yellow both not being my favorite color and one that often is very "much a less is more" deal in a quilt. If I can double these stacks by the day's end tomorrow, my life will be complete. Or at least I'll be one day closer to a life rich in 280 flying geese.

But who's counting?
Posted by Beth at Quilting Hottie Haven at 9:31 PM

There's about thirty winging their way up, should be there by Monday. :)

Goose poop. Love that name! Made me laugh.

I have a roll of the flying geese from triangles on a roll I'm dying to use but haven't yet. Good to know it can be used for individual geese too!