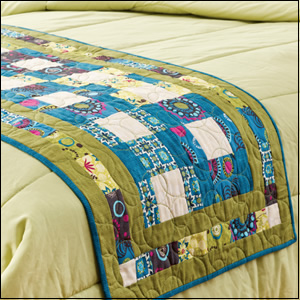 I finally got my hands on a copy of the August issue of Quilter's World yesterday, so I can finally confirm that yes, I do have a project in there as I had anticipated. From what I had seen on their website about the issue, I wasn't sure if it had been included or not, so it was kind of exciting to share a moment in the grocery aisle with my daughter, never had a doubt that it would be in there. WHY didn't I know for sure? Well read on for a little insight as to how this segment of the quilt industry works.

Designing for magazines is something that has always been in the back of my mind since I started EPQD, but it's only been in the last year that I've gotten more serious about it. I've had some luck with Quilt Pattern Magazine, an online-only publication, but I definitely wanted to break into the print ones if possible. As you may recall my 6 week session of joy over not only getting into but getting the cover of Quilter's World in April, there really is nothing like seeing your stuff in a printed publication.

Thanks to a little research, I learned that the best thing to do is, if at all possible, get the name of the person in charge of the editorial calendar for whatever publication you are interested in, and ask to be put on the designers list to be sent said calendar updates. These are published a few times a year and give a pretty specific outline of what they are looking for in each issue - the theme, colors they want, specific types of projects, etc. I was lucky to get on Quilter's World's list, and let me tell you it makes things SOOOOO much easier to know that in April they want florals and if you can work it into a stash management project, so much the better. "Quite Contrary" was born, and miraculously accepted.

The above picture is "Contemporary Nine Patch", featured in the August issue. That one came about from a design I actually submitted for a contemporary nine patch book House of White Birches (same publisher as QW) was publishing and they used the same designer list to request submissions. Here's the thing - when you submit to most magazines, it may be several months before you hear anything back. And if your design is rejected, they may still want to keep it on file. This one was rejected and kept on file, but several months later I randomly got an email telling me they wanted it for the August 2012 issue. I don't know how normal that is, but it was kind of a fun moment.

This particular design was submitted as an EQ7 drawing, and I'd given several fabric lines I thought it would look nice in for QW to choose from. Once they accepted the design and told me which one they wanted, I had about 8 weeks to contact the fabric company to request the fabric, make the quilt, and write directions. Naming this one was tough. I wanted to call it "Cocktail Hour" as it is a table runner and my fabulous quilter Michelle Banton (Little Pup Designs) did the most perfect circles that look like the rings a wineglass leaves on a table, but QW preferred a more basic name. It's all good.

Once the quilt was sent off and received and pronounced stupendously made, they sent me a contract that stated it was meant for the August issue. But part of the contract states that there is no guarantee it will show up in that issue, or any other for that matter. They say it much nicer than that, but there's the gist. Which is why when I saw the early releases about the issue on QW's website, I really didn't know if it had made it or not because it wasn't in the little video or anywhere on the site. But woo hoo for me! There it was on page 85.

The good news is, at least with QW, they pay you anyway, so there's really nothing to lose.

I've been very blessed to have all three designs I have submitted to QW accepted, which either means I am doing something right or they are totally desperate. I certainly prefer to think it is the former and hope we can keep a good thing going as they are so great to work with.

I guess I'd better get my Valentine quilt done soon so as not to screw it all up!


Posted by Beth at Quilting Hottie Haven at 8:52 PM

Beth, I love your designs and thank you for saying Quilter's World is great to work with. We do try.
Carolyn S. Vagts, editor.