So I've been hosting 10 members of the MN part of the family since Saturday afternoon, and this is what I have accomplished in the sewing world:

1. Dropped "Kickin' Stash" cover quilt off at machine quilter on way out of town to the local hotel 20 minutes away. (Don't ask. I think it's a Helfter thing.)
2. Flipped approximately 18 inches of binding on a twin sized quilt. More might have been done, but there was a constant fear of beer spillage on it.

That's it. What are you going to do, fire me as the founder of this project? I think not.

Here are a few highlights of my weekend to prove I was not just sitting around drinking beer. Although let's not get the wrong idea - that did happen. 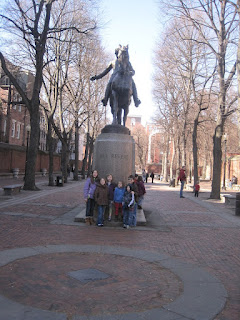 Hanging with Paul Revere and three out of four Helfter cousins. 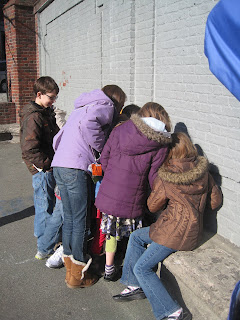 What could be at the bottom of that pile of 6 kids? A $50 bill? A loose football? No, just two boxes of pastries from Mike's Pastries in Boston's North End. My husband is also at the bottom of the pile, opening said boxes. Love this photo. 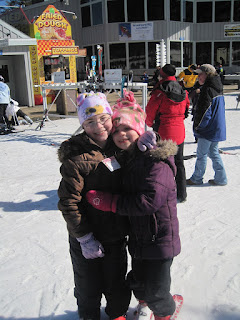 Took 2/3 of the girls skiing today for only their second time ever. Video footage to prove they didn't totally suck below.

Video of Paige removed. It seems I actually took footage of the sky instead. You will have to believe me when I say she was really pretty good, and learned to turn fairly well.

Eva skiing like a maniacal wacko - I took this video to prove that she needs to turn more. She looked at it and said "Look. I did tiny turns all the way down. I like going straight down because I like going fast." Oy vey.


Not sure how I am going to make up all 4 hours I now am behind in the next week, but I promise to to try.
Posted by Beth at Quilting Hottie Haven at 5:39 PM

Great pictures! And FYI, I would have fought my way to the bottom of that pile of Helfter-and-related-children if I knew there was a Lobster Tail in that box... but anything from Mike's rocks!

That picture sums it up perfectly! LOVE it!

The picture of Mike's pastries? Also a riot. I too, would be in that pile.