By now either you have religously been sewing along with me and hitting refresh for the latest blog installment every three minutes, or you are so over me it's embarassing for both of us. Two more days and my experimental quilt a long will be over and we can all go back to our regularly scheduled programming.

Except me. I have 6 more days of February break. Have I mentioned my joy?

Anyhoo....I really am thrilled by the participation and I thank you for sticking it out with me so far. If you've enjoyed it, please let me know. If not, my name is Eugenia Rodemacker.

Promised photos of my quilted, and as of two hours ago when I flipped the last side of the binding while instructing my children to please for the love of God play together nicely for 20 minutes and let me watch the news and accomplish something completely bound quilt. I hope you can see in these photos the detail of the quilting. Sue Fors, who has been a ridiculously prolific DaGMT participant, did the quilting and I just am amazed by how perfect this machine quilting design is for the quilt design itself. 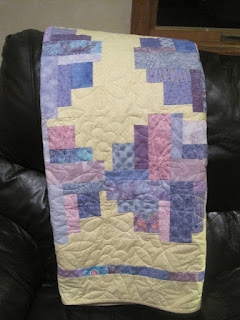 If you look right in the center of this photo you might see the cool "cosmos" flower that repeats a bit in this quilting pattern and was the reason I chose the pattern. Very cool and very pretty in person. 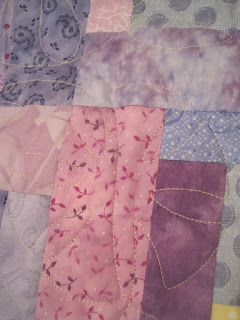 So that was twenty minutes. What will I do with my remaining 70 for today, you ask? I plan to spend the evening cutting out about 8 more blocks-worth of patches for several more Kickin' Stash blocks to add to my second group quilt, since I need more fallish colored blocks.

"But Beth," you say. "Won't sitting around cutting out those patches be terribly boring? I mean, after all, you just spent two days binding. Your brain may turn to mush."

Yes, I assure you. Yes it will. Because I will be cutting these out while watching The Bachelor, the one trainwreck show I admit to being unable to resist, even though I am a modern, educated woman with three daughters whom I will murder if they attempt to degrade themselves by going on such a show. It's terribly embarassing, but there it is.

Today, however, I found this clip from Ellen, probably from yesterday, and I watched it and was immediately reassured that I am not completely crazy, perhaps, because Meredith Vieira apparently cannot look away either, and she is way smarter than I am, even.

While watching, I came to several conclusions, all of which stem from the fact that she is ME, just like the narrator in "Guernsey Literary and Potato Peel Society" is ME.

1. She apparently finds all thing to be better with wine.
2. She knew how to open a box of wine and was not ashamed of her skill.
3. She drank Franzia knowing she would find it appalling, and then told Ellen it was straight up awful. (I was screaming "OMG THAT IS EXACTLY WHAT I WOULD HAVE DONE!" I mean really, you want to be polite, but it's Ellen. You know you don't have to be totally polite.)
4. She can't resist watching this trainwreck, although she did say she watched this season because she liked Ben. FTR, I never liked him. I am just too weak to look away.
5. She called him annoying more than once and made me laugh because she said it in the exact same way I would have. No excuses. No benefits of the doubt. Just flat out proclaimed him annoying and I was bowing down to her fabulousness.

So I'm off to watch while cutting, knowing in my heart that Meredith and I will be saying all the same things at all the same moments, hating ourselves for being so weak, and yet unable to gain strength.
Posted by Beth at Quilting Hottie Haven at 8:17 PM

Email ThisBlogThis!Share to TwitterShare to FacebookShare to Pinterest
Labels: Drop and Give me Twenty, Meredith Vieira, Sue Fors

Thanks for the laughs, you slay me!!! Jerry didn't find it as amusing as I did although I read him every word in a futile attempt to prove that he might still have some form of a sense of humor... Yeah, no. Anyway, I remain your biggest fan! Angie