If Nascar had a quilting race, I know who would win

I also know I wouldn't watch it because I don't enjoy Nascar, but whatever.
Did any of you have visions of being the first to get your Scrappy New Year blocks back to me? Give up the dream. As predicted, Angie Callbeck of trash barrel diving fame from the previous post has won. As usual, and much to the chagrin of Judy "Speed Demon" Damon, who will have to settle for some other number this time. We love Angie, but really, it's like you almost have to get up last month to beat her at anything quilting related. 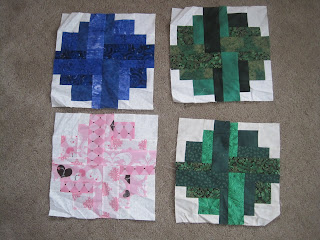 I went to my guild's open sew on Saturday, whereupon Angie handed me her four blocks, which she had made the night before. Many of you may be saying "What??? I didn't even get my directions until Saturday afternoon! Cheater!" but let me assure you that no, she isn't alone in cheating. I gave her the directions early at her request, thereby becoming the enabler that I love to be so that I may then turn around and give her crap for being the first one done. I'm a fantastic friend.
But aren't they cute? Minus the fact that they look like I threw them in the bottom of my bag and forgot to take them out until today (no comment)? Nothing a little iron won't fix and I am so excited to have more come my way soon! There is nothing like the thrill of getting the mail when I am running a group project, and it has nothing to do with the hotness or lack thereof of my current mailman.
I was so excited to be overwhelmed by responses from quilters who wanted to participate. I should have enough blocks for two quilts! It isn't too late for you to throw your scraps in the ring too - just let me know and I can get the pdf to you asap.
Posted by Beth at Quilting Hottie Haven at 2:41 PM

I guess there is an overachiever in every class eh? (It wasn't me--I was your basic high potential under achiever.) lol -- which is why I was so proud of myself to get the blocks done before sometime in April. Well, they are done, but you haven't received them-we'll see how long it takes me to send them. ;) I really do LOVE the block. Soo fun.