We're in the final countdown to Christmas week, or as we call it in the Helfter household "Cakefest (insert year)". With three birthday girls eight days apart and Christmas smack in the middle it's nothing if not a caloric extravaganza to strike horror in the hearts of personal trainers everywhere around here this time of year, so it's good that I am able to find little last minute projects to work on that allow me to unstrap the feed bag now and then. Impressive how I brought that back around, huh? There was a moment there where I didn't think I was going to be able to do it.

When I cleaned out and rearranged earlier this fall, I found several UFOs. I know. Can you even imagine not finishing every project you start? What would be the point? Horrors. Anyway, one thing I've done for years is to turn orphaned blocks into little quilts or even tree ornaments, and I've made a few this year. Wanna see? 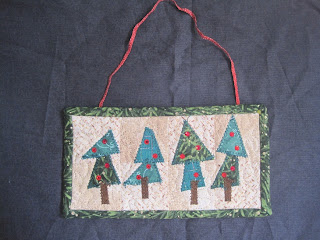 Don't those trees look familiar? I only know how to grow one kind of tree, and it's the funky kind. These guys are all about 3" tall at the most and I just think they are so cute. 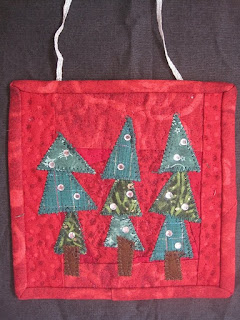 I'd make an amazingly consistent tree farmer, wouldn't I? Doesn't putting them on a red background make them all that much more stunning? 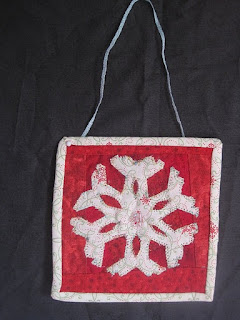 Imperfect snowflake, anyone? I should stick to tree farming and leave snowflake making to the water fairies. I do like the red/white contrast, though. 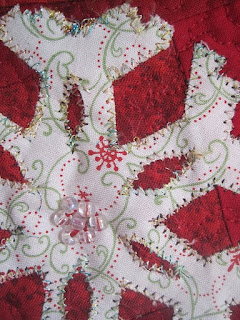 A close up of the beads in the middle confirms what we have all feared: I'm going to have to mention Jewel-it in a post again. Because I clearly was out of my head with fever or something when I made this one, I decided to (wait for it...you might want to be sitting down...) SEW these beads on. "Why?" you ask in horror. "Why would she ever do such a mad thing as thread a needle and sew on a bead when she is the president of the Jewel-It Fanatics Club?" Your questions are well justified and the answer is thus: I truly have absolutely no idea. I don't recall my thought process here and I would like to think that is because there was not an actual sane thought going on, as evidenced by the fact that I chose to use red thread with clear beads. Really? What kind of wacko am I?

One who needs to stick to gluing, that's what kind.

My final project for the season, which I'll have to show once they are done, is turning three wooden beds into retreats worthy of the American Girls. Eva wants "Julie's bed", the one with the hippy beads hanging down, and I'm pretty sure this is a job for Jewel-it. Paige and Greta want canopy beds for Emily and Marie-Grace, which means some sewing of curtains, and with any luck I'll be using thread to coordinate with the fabrics. But this being me, don't count on it.

If you've gotten this far, I want to take this opportunity to thank you all for reading this blog this year and supporting me in all the ways that you have during 2011. I have so much fun writing it, and hope to be able to keep connecting with all of you on a regular basis in 2012. Merry Christmas, Happy Holidays, Happy New Year, and if I don't see you before then, I'll see you in 2012!
Posted by Beth at Quilting Hottie Haven at 9:33 AM