I recently returned home from Rochester NY, a town famous for two things:

1. I was born there.
and
2. The Genesee Valley Quilt Festival.

Since they were not planning any parades in celebration of my birth 40-some odd years ago, the Quilt Fest was going to have to do for a reason to return. So a week ago I hopped in the car on a dreary afternoon and headed down the Massachusetts Turnpike, rocking out to all sorts of 80s music on the radio and generally enjoying the moments of solitude before driving boredom was sure to set in. I needn't have worried. Not an hour into my drive, the sky opened up like a car wash, the winds were insane, and hailstones started hitting my car. I couldn't see two feet in front of me. Then, stuck 8 miles between exits off the pike in either direction, my radio starts beeping the National Weather Emergency beeps that normally are reserved only for tests in the middle of Elmo's World because there is a Flipping TORNADO in the vicinity. I had about 5 minutes of sheer panic attack not knowing where the hell to put myself and the car, and just kept going because everyone else on the road was doing the same. Visions of the 30-ish quilts belonging to myself and other members of NEQDC in my car cycloning over central Massachusetts filled my head - and then it was over as soon as it began, blue skies ahead. I later found out that yes, there was an F3 (does F stand for flipping? Because it should.) tornado less than 20 miles from where I was at that moment. Well, played, mom and my other guardian angels. Well played indeed.

So, as Cary Flanagan, one of my NEQDC colleagues who joined me on the trip (although she took the wimpy way out and drove through only beautiful weather the next day) noted, I can now "say for sure that neither hail, nor rain, nor tornados will keep me" from bringing EPQD to the masses. But I must admit I hope never to have it happen in such a dramatic fashion again. And my heart goes out to all those in MA who lost their homes or worse that afternoon. It was a freakish thing and truly terrifying.

Anyhoo, on to the show! Genesee Valley Quilt Guild is a 300+ member guild and they truly know how to put on a show. Over 1000 quilts, several traveling exhibits, a fashion show, two live auctions, and my personal favorite, the Iron Quilter competition. I was chomping at the bit to participate in that one; quilters were given 5 hours to create a quilt, start to finish, including quilting, binding, embellishment, sleeve and label , and when I tell you these quilts were A-Maz-Ing I am not giving them enough credit. Holy insane talent.

New England Quilt Designers Cooperative was one of 41 vendors at the show. Terri Sontra, another NEDQC member, and I arrived a day early to do set up and I must say we did a fantabulous job. If you have read our "Strength in Numbers" article in The Quilter (shameless plug), you will recall we often refer to setting up even a double booth with all of the samples from six designers as trying to fit 10 pounds of sugar in a five pound bag, and this time was no different. Thankfully we did have another show going on in Connecticut (where member Barbara Chojnacki was doing a bang up job representing us), so this time we were down several samples and that actually was a blessing. I snapped these photos toward the end of set up: 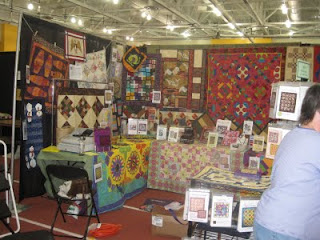 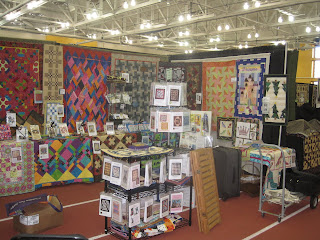 Note "Beth's Embellishmenty Corner," where I spent much of the weekend demo-ing my favorite glue, Jewel-it, and selling it by the truckload.

The show was held in the RIT Field House and was way cool to look down on from the upper track area. See that marquee on the left? 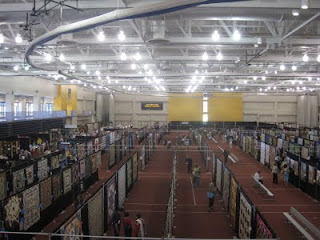 It's a little blurry, but it says "New England Quilt Designers Cooperative" - all the vendors were scrolling all weekend long. Very cool. If you wonder where the people are, well, we'll admit this was the slow day, but these photos were also taken during the fashion show, so most people were sitting at the very end of the room enjoying that event. 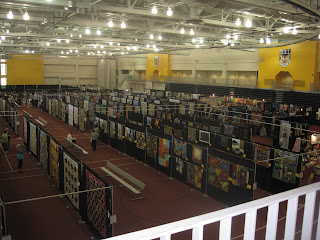 Despite the tornadic experience of getting there, I'm so glad we participated. Not only was it a fun show, but I learned two very important things about the women who worked the booth with me:

1. Cary Flanagan (Something Sew Fine Design) unwinds in the evening with a Port and Orange Juice cocktail which is actually quite pretty.

2. Terri Sontra (Purple Moose Designs) has as crazy a life as I do and her dog receives a pension from the state of California. Love it.

God only knows what they learned about me.

Little did I know that
Posted by Beth at Quilting Hottie Haven at 9:51 AM