American Girl hoodie towel tutorial....aka "For the Doll Who Has Everything"

With Christmas a mere week and a half away, I thought today I would share a tutorial showcasing some gifts I am making for my daughters' American Girl dolls. With three little girls ages almost 8, almost 8, and fully 4, we anticipate another Christmas wherein the entire living room is covered in little red boxes and the dolls end up better dressed than we are. As much as I enjoy shelling out $25 for a pair of shoes for a doll (times 3), I also enjoy getting creative, and that is where this tutorial comes in. It was inspired by an actual hoodie towel a friend made my youngest daughter as a gift, and I just miniaturized it. So if you need a last minute gift idea for the American Girl lover in your life, sit back and take in the wonder of this quick gift. And I do mean quick. Including taking photos, changing a needle, filling a bobbin, and changing thread color three times the entire project took me less than 20 minutes.

One washcloth, which here in New England we call facecloth. I have no idea why. We also say "down cellar" rather than "in the basement". It drives my Midwestern husband batty.

Fusible for applique (I'm a Heat N Bond lite junkie, but whatever you like will be fine.)

As you can see, I have chosen a lovely shade of lime green for my towel that gets completely washed out into a sagey color by my camera. But trust me, it is lovely. I bought the towels and facecloths at Target where they were about $3.50 for the set (on sale). 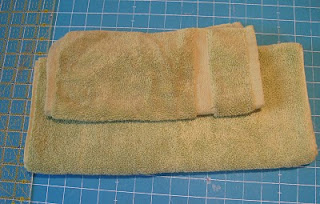 Draw your desired applique shape(s) backward on the fusible. Fuse to the fabric, and cut out along the lines. Fuse shapes to the middle of the hand towel. (Quick quiz- which American Girl is this for? That would be Julie, about whom my daughter once said to a friend during a playdate "Julie is from when my mom was 4, so she'd be 45 now. If she's even still alive." Remind me why I am making these for my darlings again???) 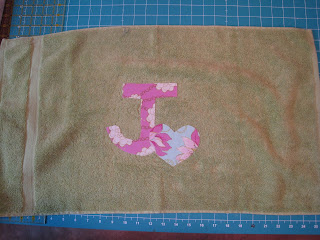 Once the shapes are fused, satin stitch around them with some pretty threads. Because American Girl stuff is all about being pretty. I have no idea why this photo is sideways, but just tilt your head and you'll be fine. I can't be bothered to fix it, truly. 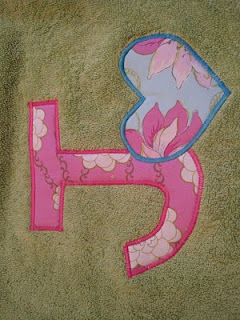 Set the towel part aside and locate your face/wash cloth. I like to slice off the binding at one end and then zigzag the raw edge so it isn't so bulky. This is especially important to do if you are making a hoodie towel for an actual child; the AG dolls in theory shouldn't be too picky and probably won't complain about the bulk on top of their heads, but why take the chance? If you've seen Toy Story 3, you know why I didn't hesitate to do this for the towel I made Greta's Bitty Baby. 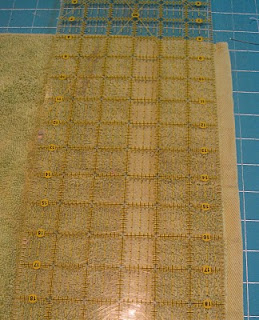 Fold the face/wash cloth in half and sew a 1/4" seam along where you zig zagged. This will form the hood. 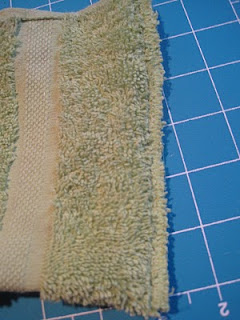 Turn hood rightside out and flatten the end opposite the end you just sewed. Pin the hood to the towel as shown, centering the hood as best you feel like doing. This is for a doll after all. I don't ever measure, I just eyeball it. But we all know I am about fun over fuss. Measure if you must and I promise I won't make fun of you. 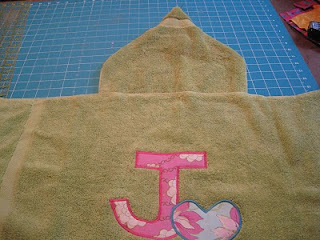 Here's a close up shot of how I pin. It also shows the towel binding, which is where I sew the two pieces together. Right along the bottom of the binding, stitch. That's IT! You are done. 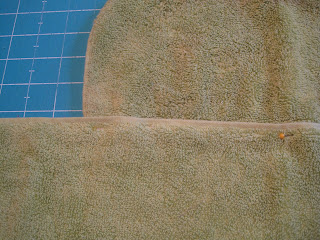 And here is Julie, relaxing after her bath. Isn't she stunning? 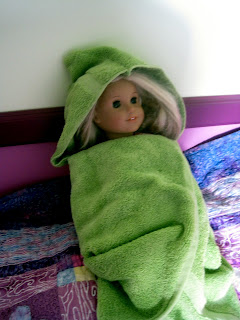 Here she is from the back, looking like she's having a little time out. But there you go, front and back views. 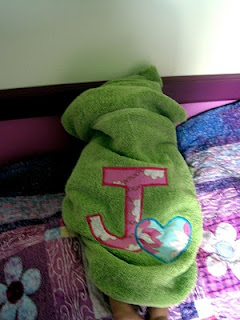 Even if you don't have the required 20 minutes to whip one of these up before Christmas (plus 3 hours to get to Target, find a parking spot, stand in line, etc), these make great birthday gifts - and those happen throughout the year.
Merry Christmas to all the American Girls!


Posted by Beth at Quilting Hottie Haven at 1:56 PM

So cute!! I never would have thought to scale it down for dolls!
I bought the towels for G’s at Target also…I think they have the best color selection by far.

Mine is finally getting her first AG doll this Christmas and I can NOT wait! And guess who she is getting? Julie’s best friend, IVY! We will have to set up some AG playdates after Christmas.

Absolutely Renae! We are constantly having AG tea parties around here and Mason and Ivy will have to join the fun. We'll chat!