Five's the Limit, Hotties. Hold Me to it!

So now that the festivities are over, and in this house the festivities of Christmas and the new year also include three of five of our family birthdays within the last 9 days of December, and NO we were not smart for having twins on December 30 but we enjoyed the tax deduction immensely, it's time to refocus. Reset. Reprioritize. And apparently set aside a little time to ponder why one cannot reproritize since it appears not to be a word.

In a consortium of creative professionals I belong to (you didn't think all this awesomeness happened without being vetted and discussed sometimes, did you?), the idea of a focus word for 2016 has been bandied about with great passion over the last few weeks. I resisted for a while, because my modus operandi is generally to wake up and figure out what I feel like doing creativity wise on any given day, and who wants to be tied down to a word to make me focus amongst my fabric? But eventually I caved, and I think it will be good for me.

Because let's face it, the current modus may be freeing, but sometimes it can be a little overwhelming to let the creative side of my business get too out of hand. As much as I love that I work so far outside of my box that I can't see the box most of the time, will try anything once (and probably fall in love with it and do over and again), and my design wall has to be huge because it's a rare day when it sees only one project on it at a time, I must admit that this whole "Squirrel!" fabric play mentality has become at times rather detrimental, as this past year I was probably more creative than ever but suffered by far the most episodes of burnout when it came to pattern completion of my ten year career. So it's time to change a thing or two.

My word of the year is FIVE. As in "I will not allow myself to be actively working on more than five projects at one time." Should a new project come along that I simply must start, then by my own new rules I simply must set a current one aside, and by set aside I mean actively put it in the UFO pile, not just shove it off to a far corner of the design wall stacked up with pins, where I can still see it and can still tell myself it's a project I'm working on. If I truly believe a design has potential, I should finish it rather than UFO it. If I truly believe a new idea has potential, it should be able to wait til one of the other five potentials is out of the queue.

I'm also actively considering using the word queue in public this year because my Anglophile daughter will go nuts with joy. But back to five. 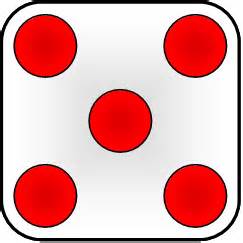 As of today, these three projects are on my design wall. All of them I believe in and will be completing, she said with conviction: 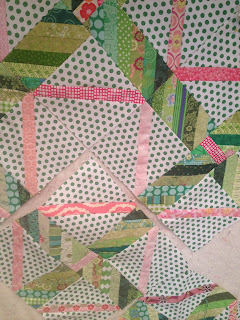 #1 -  Remember that free block pattern I had for a limited time early last fall? It's almost a top and WILL be a real pattern, because I believe in this project and will complete it, hopefully during DAGMT this February.

Missed the free block? I'm sorry. It was a limited time  thank you to my facebook followers. It's one of those you snooze you lose situations, and therefore I am not even showing it in full here so that you don't have to be all upset that you missed it. I'm always looking out for you, you know. The pattern will be even more fun than the block alone, of course. And it will be done because it is my top #1. 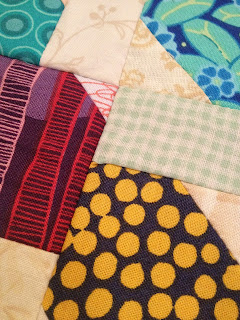 #2 -  Then there is the annual January Jumpstart group project. More details will be announced this week, and my sample block is done. In the "two birds" category, I'm also going to be using this block for my guild's Feb BOM. But as yours come in, this project will be a huge priority for me. If you've taken part in my scrappy group projects in January before, you know they are usually pretty quick and fun and you get your block on a pattern cover just for testing for me. I'm so thankful you all work so cheap.

There will be a blog post, a newsletter, and a FB announcement to join this group project, test, and swap on January 6. I expect to fill all 40 slots quickly. If you are interested, make sure you read one or all of those sources on Wednesday and let me know ASAP if you are in. 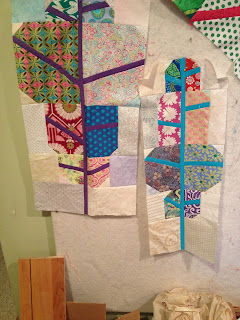 #3 - Blue Nickel Studios "Painted Trees" pattern won me over. It's rare these days that I work on someone else's pattern, but I think it's important to do it now and then. Following another designer's instructions is pretty enlightening, both about what I could do better and where I rock it big time, thankyouverymuch. I'm thoroughly enjoying this fun scrappy pattern, and the color scheme definitely was an influence on the January Jumpstart block. This one will likely end up in the UFO bin now and again if I have to make way for other projects, but I do hope it will be on the wall more than it is off. Plus in the discovering of it I got to know the designer, Scott Hansen, a little better and he is a riot. Branching out (ha ha, pun with the trees) is always awesome.

So that's three, and that covers my design wall. #4 - is a free block I am designing so I can take part in Block Stock, and #5 is by far the most craziest piece of insanity I've ever decided to take on, but I'll be attempting a Millefiori EPP project using "The New Hexagon - 52 Blocks to Paper Piece" by Katja Marek. I've joined a FB group dedicated to the project, bought the book, and the end product should look something like this one, except with my fabric choices.

I'm not going to kid myself, this one will end up in the UFO bin now and again too. But I'm choosing to give it a go this year and am giving it a slot in my top five right now because I think it's going to be a great lesson and good practice in tone, value, fabric choice, fussy cutting, patience, and seeing just how many tiny scraps of fabric Mr Quilting Hottie can handle on the floor of the living room at any given time. My over/under is about 13.

So FIVE. Cinco. Cinque. It's my word of the year, and by limiting myself I hope to smash my own creative boundaries. 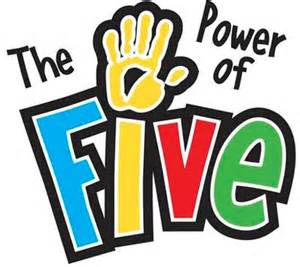 Posted by Beth at Quilting Hottie Haven at 3:48 PM

Email ThisBlogThis!Share to TwitterShare to FacebookShare to Pinterest
Labels: Scrappy, UFOs, word of the year 2016

This is a good idea. I might try it.... Right now I have five quilts that are active and probably another 30 in the UFO pile.... sigh...

Five is a good number. I would love to see your Millefiori quilt. I have always loved the way they look but I've tried EPP and I just couldn't settle in to it. Maybe in the future I will give it another shot.