Card-carrying member of the Posse

At some point this fall, when I was doing my normal whirlwind of activities related to getting back to a daily routine that would include time for design and quilting after a loooooong summer of playing Julie McCoy, I agreed to take part in Patchwork Posse's latest Round Robin project, which is why you may have noticed this little icon off to the left there. 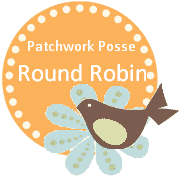 The basic jist of the project was that Becky, the fabulous Posse Boss at www.patchworkposse.com/blog, would create a round robin center, then several other designers would create either a top and bottom or right and left border every two weeks until the end of January. I picked the date for my border directions to be revealed as January 10, because at the start of the project in early October, it seemed so far away. I then told myself I would not put this project off too long and have to create the entire thing including all previous borders in less than 15 hours as surely that would take away all the fun.

I sort of listened to myself, since I did start sewing the project itself about a month ago - only about 7 weeks late. Could have been worse. I think it was one of those dreams I frequently have where I have been taking a class at college or in high school all semester and then all of a suddent realize I haven't even gone to even one class and it's finals week that got me to snap-to in a somewhat timely manner.

It just so happened that I had a set of 9 amazing batiks I bought at spring Market last year and still hadn't done a thing with them, so they became The Chosen Ones for this particular project. Not being a purist who refuses to mix batiks and cottons, I raided my stash for any and every fabric that even remotely coordinated with the batiks, and found a selection of about 20 fabrics total and prayed it would be enough because I didn't feel like going quilt shop hopping when I was just about to get my sewing groove on. (Aside - I am also not a purist in that I am unabashedly not a prewasher. When I want to sew, I do not want to wait to wash, press, and starch my materials. I'd rather take my chances. But does this really suprise anyone?)

Once I had all the previous borders together, I had to create the next two, which were a top and bottom border. One interesting thing I had not anticipated when I started this project was that when several different designers are working on the same piece, not only are they going to have all different styles, which is awesome, they are going to have all different ideas of what a 1/4" seam is, which is not so awesome when you are one of the final designers. I admit to having a lot of trouble getting some of the borders to fit - although granted I am not a perfect piecer and generally don't do a lot of fussy piecing like some of the borders called for, so this is likely due mostly in part to my idiocy - and wasn't even sure what measurement we were at before I started my own border. But lucky for all the participants - I am a pro at creating fuss-free borders, ones that don't need to be exact or perfect, and I think I did a pretty good job creating something that would work. I incorporated a block style I use quite a bit in my designs, that being a sort of funky piano key, and added some sashing using my background fabric. Really the only thing that HAS to match up is the right and left most sashings with the previous border. I feel fairly confident most quilters can handle this without swearing at me. 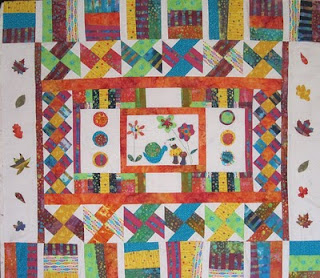 If you haven't checked out this and other projects at the Patchwork Posse site, click on that icon at the top of this post or on the left side of your screen and see what they have to offer. My border directions will go live on Monday. Consider yourselves special that you got to see it here early!
Posted by Beth at Quilting Hottie Haven at 11:10 AM