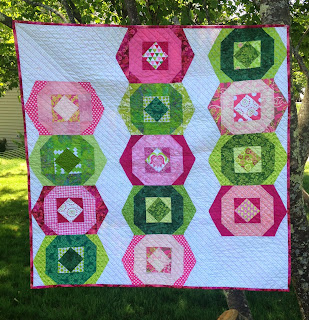 At long last, I can finally announce that this pattern, the one I started oh maybe eight months ago but it feels like seven years ago, the one I have gnashed teeth, spit nails, and generally banged my head against the wall over, the one nameless for so long I figured at one point I might as well name it FTLOG (For The Love of God) for all the pain and suffering it was causing me.....well, it's done. Cue the fanfare.

I know that description of the fun I had with it makes you want to run right over to Craftsy and purchase a download-it-before-you-can-get-it-in-print version, right? Before I lose you entirely, it's  important for you to know the sources of my frustrations, which were NOT the writing of my directions (so yay!) or the way it fit together (yay!) or the general ease of construction (triple yay!). Oh no. Those are really fine, and were tested by five fabulous women who confirmed it was a good pattern. The problems were all about the cover, and were enough to inspire a new song by Meaghan Trainor if she were a quilter (its all about that cover, 'bout the cover...... it's TROUBLE!). Let's break them down:

Problem 1: Mental block over the name

This was the biggest problem, so we'll list it first. Naming a quilt is hard. But if you've ever named a quilt PATTERN, you know that is a whole other beast with seven extra heads. You have to strike the right tone of generic (ie no mention of colors or specific fabric patterns because you risk swaying users to stick with only those colors or fabrics; no words that might limit the use of the pattern for only one segment of the population, etc.) while appealing to the entire feel of the design itself. Then if you are me, you have to Google the name to see if anyone else has called a quilt pattern something similar, because who needs to compete with Terry Atkinson or Mary Fons? Sometimes a name comes to you before you even start cutting your pieces. Sometimes it takes eight months. Unfortunately, this was one of those times.

It wasn't for lack of trying. I've shown this quilt at my own guild show and tell, at several lectures, and more than once on my EPQD facebook page, asking for name ideas. While I got some that came close, none were really grabbing me enough to make me stand up and yell "YES THAT IS THE NAME!" Which I actually do do most of the time, so excited am I to have a name for a pattern. It may be that this was not the first time I struggled, I won't lie.

So how was this problem solved? Last Friday I just said to heck with it. I went with the best name I had come up with and said some bad words. Done.

I love including more than one size in my patterns, because with the going average price for a pattern at $10, I want you to get as much for your money as you can. If you only make the pattern once, that is awesome, but it won't be for my lack of trying to convince you that you need to make it in at least two sizes and for every member of your family plus the dog. This also means that I like to show two of the sizes included on the front and back covers, and normally I like to put the larger size on the front cover. It's just my thing. You probably don't care or notice the size on the cover, but now you will.

So I made a twin size version for the cover, all in lovely polka dotty black/white/teal/purple shades with some batiks thrown in, determined to throw it on the cover. Somehow over the years, I had forgotten that b/w prints are a beeyotch to photograph. And by beeyotch, I mean just kill me now.


Finally, I gave up. This is the face of defeat and the smushed boobs of the desperate. (Note - "Boob Tube" was also suggested as a name more than once.) 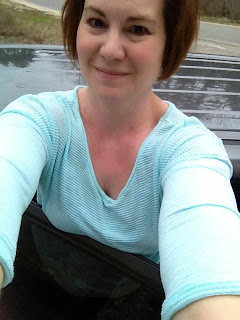 Admitting that I was not ever going to get a photo that did this quilt justice and made for an attractive cover lead me to the next problem:

Short of making another twin sized quilt or hiring someone to do it for me, I was not going to have two sizes. But what I did have were five testers, who had made me beautiful tops, one of which was chosen in a viewers choice contest to be on the back cover to illustrate the baby size.

Because I had the pink/green version at the top of this post in hand and quilted, and a photo of Laura Piland's (Her blog is here!) winning teal and brown version all quilted and ready to go, I put an end to the madness. I asked Laura if she minded being a cover girl instead of a back cover girl, to which she replied "excuse me while I go run around the house screaming." So I guess that was okay.

The final cover is as pictured above, and the pink/green version is on the back cover. Directions still include twin size requirements and layout as well as the baby size, but my life is much happier now that I have decided it is just plain okay to not include a photo of that particular size. After all, most of my scrappy patterns actually have 3 or 4 size options, but I only show two on the covers. So how is this different? I have decided it is not. If you don't agree, I respect that. However this solution is working for me. And since NOTHING about this cover process was working for me for so long, I'm good with my solution.

If you are still here with me, I cannot thank you enough just for sticking around and reading of my plight. My final issue is one you can help me with, and I hope you will:

Please comment - is it Hexi or Hexie? Both are rejected by spell check, so we as quilters must decide. Before I send it to the printer I want to know if I am doing it the proper quilty way!

Posted by Beth at Quilting Hottie Haven at 10:26 AM

I've always gone with "hexie" though I suppose another choice might be "hexy" - just to add to the confusion!

Ha! I was going to say "Hexie but ask Judy!" but she beat me to it!

A Bing search shows nearly universal use of hexie, so I'd go with that. Sorry you had to go through so much anst with the pattern. The joys of being a designer, I guess.

I loved your shoes