Gathering swag at The Gathering

Top 5 Excitements from The Gathering 2012

1. My designers cooperative was able to secure a vending booth this year, which made the show extra crazy nutty for us but we are hardly complaining. The new location allowed for some newbies like us to get in; had they stayed at the old location, we would have continued to have to wait for someone to die before there was room for us. Not only was it great in that we could get in, but the layout for the show, raffle quilts, vendors, etc was all so much better than any other quilt show I have attended in this location. Kudos to Kate and Sarah, Gathering Hotties.

2.  Our across the aisle neighbors, Heart in Hands Quilt Shop from Weymouth MA, were as hilarious as we were, plus I "revolutionized" the beading process for one of the owners with my intensive 6 second Jewel-it demo. I highly recommend visiting their shop. It has to be beautiful based on their booth. And it has to be an extremely entertaining place to be based on their staff.

3. This was my favorite part of the actual quilt show, which apparently trumped all other parts of the show so much so that it is the only thing I took photos of, and then only two photos so I didn't even get the whole thing. I'm so professional. But really, it was just so cool who needs photos of anything else?

I'm not sure why I can't put these two photos side by side, but by now none of you should be surprised by the almost post-ly glimpses into my technological inadequacies. But I will explain the best I can what this was all about. All of the Nationally Certified Judges worked on this project as a group (now you see one reason why I loved it) from their various homes and studios all over the country. They were each to create a quilt with a "line" going left to right in their design, and the line had to start and end with colors that were assigned to them in an exact spot along the edge, so that when the quilts were all hung next to each other they would form a big long line of connecting color. Example, the first quilt in the line had to start with yellow and end with yellow-green. Whatever happened in between was fine. 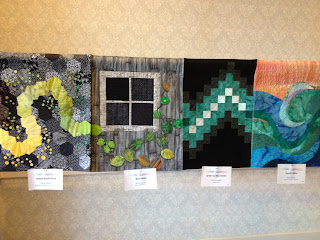 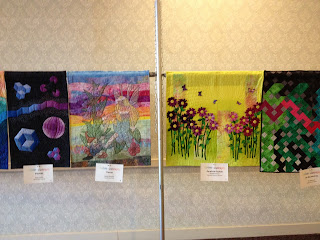 As you can see in these two pictures, every participant had a different interpretation of "line" and everyone had such different styles  - the whole thing just was the coolest display ever. I found myself thinking it would make a fantastic guild challenge, but the biggest problem would be you would need to assure no one dropped out or the line would be lost, and I'm not sure that is possible in most guilds.

4. Several brushes with hottie greatness were just way too much fun for me. Amy Lindsay stopped by to pick up her "Funky Tree Farm" kit that she won right here a few weeks ago. Marianne Nowacki (Hillside Quiltworks) was perusing our booth when she glanced at me, saw my name tag and outed herself as a follower of the blog with "I follow your blog - you are a NUT!" I had to bedeck her with a Quilting Hottie pin immediately. It turns out she also participated in the "Kickin' Stash" group quilt, so we spent a few moments looking for her block. I was relieved when we found it so that she would know I really did include them all and I hadn't just thrown hers in the trash or some such horror. Danielle Pelletier stopped by with many friends and stole me away to use me as show and tell while she sang the praises of "Syncopated Ribbons" to another vendor. She also was very excited to show me all of her thread purchases, and I only hope she isn't missing any as I may have dropped one or two when she was trying to fit all 87 spools she had purchased into my hands at once. I also enjoyed a lunchtime chat with Marianne Hatton, a designer and author who has the nicest most soothing voice and accent one could ever hope to listen to, and she made my day by knowing who I was even though I am a gnat compared to her giraffe in this business. We may even become besties since she stopped by the next day to ask my advice about starting a business Facebook page. It was all a little bit fun indeed.

5. I got mega-swag, both for the "Drop and Give Me Twenty" event in February and in the mail, and because I do now and then open my own wallet and buy some stuff, I did that too. There are just no words for how excited I am to start sewing with all the cool new stuff I bought/was gifted this weekend.

First, when I returned home from the first day of the show a package from Northcott had arrived with fabrics for a new design I am about to start sewing. They are so luscious I could eat them. 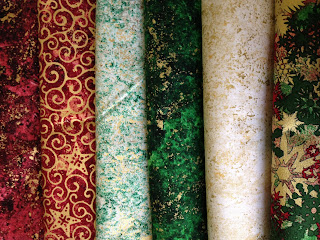 Second, thanks to a response to a panicked email I sent to my friend Jen Eskridge (Reanna Lily Designs) wherein I promised I was about to lose my mind if she didn't tell me how to make perfect circles with fabric, I found a ruler which is about to change my design life. Provided, as Jen cautioned, I remember to clear off my table entirely before using it. Otherwise it's just going to change the location of piles of fabric from my cutting table to the floor. 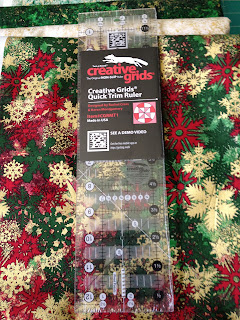 Check out this thread. It's going to be amazing on this project. Metallic green and copper. 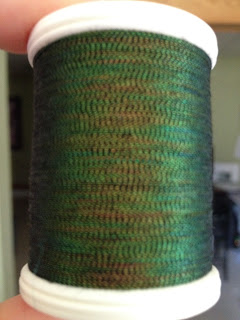 And finally, for another project I have in mind, I am sorry, but is this not the most perfect mermaid hair ever? 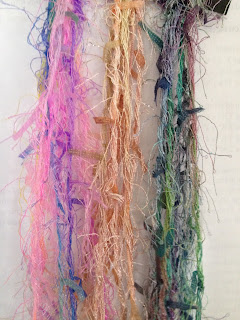 Back to reality and heading down to chop up my luscious fabric right now!
Posted by Beth at Quilting Hottie Haven at 1:07 PM

Okay, you can be besties with a famous quilt designer, but promise me I'll always be your west coast bestie. lol Sounds like you had SUCH a great time!!! So cool that you guys got a booth this year! Happy slicing and dicing. Can't wait to see the new design!