When the lists have lists

It's that time of year....when the height of summer and most of its insanity is over (and surely you are saying "Thank God! She hasn't even had a moment to write a blog post and I miss her so very much!"), the back to school outfits are purchased and ready for action, and daily I unapologetically recreate the "It's the Most Wonderful Time of the Year" best Staples commercial ever on my front lawn. It's also the time of year when the looming "free time" I will have starting in 21 days (but who's counting) starts to take shape, and the ideas for how I can improve/grow/continue world domination with EPQD are flowing like mad, resulting in more than one sleepless night since I really will need about 42 hours in a day to get it all accomplished before next June.

Over the next few months I will be announcing some exciting new patterns, revamping and recommitting to my newsletter, attending Fall Market and doing a Schoolhouse with one of my distributors, and running a new group quilting project online. I figure if offically write those things down, they will all have to happen! I also hope to repaint the powder/laundry room. Now that is exciting stuff.

I've done some quilting this summer, some of which will be revealed very soon, and some of which is going to have to remain secret for a little longer but trust me it's big news, at least for me. I did do one project with my older girls that I'd like to share here: some quilted throw pillows for their newly decorated "preteen-style" room. I know most of you will be supremely jealous when I tell you that I now possess a room in my home that is painted hot pink and electric teal. I know. It's all you imagine and more.

I attached Mistyfuse to the reverse side of lots of different scraps, cut them into 1" squares, and had them arrange the squares into cute pictures on a 20" square of tone on tone white. I then fused the pieces down and just stipple quilted it all down while I was actually quilting the top of the pillow. Score another point for lazy quilting! Paige, my 60s flower child, made this little number: 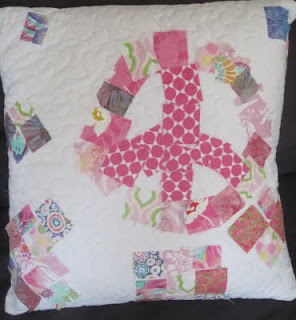 And Eva, always one to have to correct people who call her "Ava", made this one to help them remember her actual name:


I also made them new quilts (same pattern, one pink, one teal) but I cannot show you them yet for reasons which will be revealed at a later date. I also cannot let them use them, touch them, or be in the same room with them because my children are the messiest children on earth for several more months, again for reasons which will be revealed at a later date. Suffice it to say they are P-ISS-Y about this, and I can't really say I blame them, but short of making two more quilts exactly the same for them, which I am not a nice enough mother to do, there is nothing I can do about it. Instead we made these pillows and that will have to be enough for now, although you know it won't be and I'm going to hear about it every day for the next six months.

Posted by Beth at Quilting Hottie Haven at 9:44 AM

I've been humming that Staples commercial for weeks now. I'll meet you at the library and we'll coast down Main Street on our shopping carts, one leg gracefully outstretched, while we sing it at the top of our lungs.

Renae, you are so on. Maybe we can get the Free Press to cover the story of our joy.