A clear method of egress is so not overrated

Like half of the country this weekend, I got to experience a bit of the wrath of Irene. Living 45 miles inland and practically in New Hampshire, the prospect of a real live hurricane actually getting close enough to us that we'd have winds over 30 mph was truly just a little exciting. To listen to the media, you'd think we were all going to go the way of Dorothy. I boldly went on record as saying that we'd probably end up with just a little rain.

I calmly went the the refrigerator and drank a beer just to make sure that if we lost power for a while all of them would not go to waste, then I suited up myself and my girls in our rainboots and coats and out into the dregs of the storm we went for a little neighborhood post mortem. For those of you who have never had the joy of coming to my home in person, it would help you all to know right now that our street is a cul de sac directly off of Main Street consisting of 21 houses placed around an open grassy area in the center. So picture my girls and I happily splashing about in the puddles as we walk around the circle, inspecting the damage to the fairy houses they have built on the circle and planning the insurance claim to Fairy Home Companion Inc for the rebuild, and generally enjoying the fresh air on our faces when we come upon this: 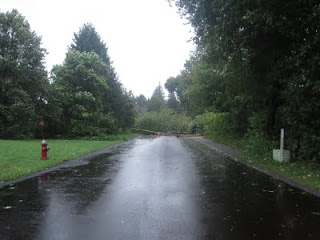 Forgive the distance - the wind was still gusting and I didn't want to stand next to those other trees you can see. But you get the picture.


Word spread like wildfire, which incidentally would have been useful for removing the tree, and all of a sudden everyone was pouring out of their houses to see what was going on. I ran home to tell my husband not to have a heart attack, stroke, or aneurysm in the next 24 hours unless he wanted to make me a rich woman and to grab my camera.


Over the next few hours the police caution-taped off the area and important assessments were made: Who had ice? Who had hot water? Who - and these became the coveted neighbors - had a car on the outside? Who had generators? One neighbor admitted to owning a generator but choosing to keep it in a storage unit across town, now approximately 3 miles and 30 feet of tree away. However, this same neighbor is a licensed electrician so we voted to let him stay on the island despite this issue, knowing his skills would come in handy. Our immediate next door neighbor offered to run a power cord over to our home from his generator so we didn't lose everything in our refrigerator. We gratefully accepted, set it up, and then figured we'd better have another beer just in case anything went wrong with the generator. Plus, we clearly weren't going to be driving anywhere anytime soon.


5 Positives to Being Without Power:

1. I had 30 hours free from having to listen to Taylor Swift's song "Enchanted" over and over again.

2. My electrical bill will be smaller next month.

3. Perfect excuse not to have to bake yet another cake for Greta's real birthday, which was Monday, after making an awesome lady bug cake for her party last week.

4. Got to talk to neighbors in my pajamas without feeling weird about it.

5. Kids go to bed early because there is nothing else to do. So do parents.

Note that there are no positives to being trapped in your neighborhood.

1. I was likely to have another fun day of family togetherness ahead of me.
2. Greta's 5 year old physical, scheduled for Monday am, and which she needed before being allowed to start Interim Kindergarten next week, was in serious jeopardy. This, my friends, was enough to send me into panic mode.

Every friend in town with a phone number in my phone or head who owned a minivan was now at risk of being called by me to be begged to get us all to the appointment. I am happy to say it only took two phone calls to find someone with power who was willing to help me. I truly love this town. And I took the fact that I had made alternate arrangements to mean that National Grid would clearly now be working through the night to clear our road and I wouldn't need help in the morning.

Because I should really bring quilting into this post somehow, here is a photo of our one personal item that did not make it through this drama unscathed - a table runner which is now covered in wax. 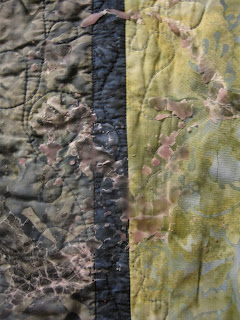 The light of day brought a huge change to the situation: 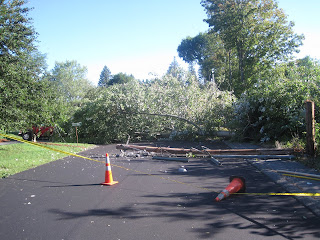 That's right. Now instead of rain there was sun.

By now, about 19 hours post-tree-smash, we had moved beyond annoyed and put out to full out pissed that we were still trapped with no sign of action from the outside. If Irene had truly been a menace in our area, it would have made sense that we had to wait a little, but even the police couldn't tell us why it was taking National Grid so long to get to us, and kept saying "Independence is our number one priority." Ours too, buddy. Ours too. We bandied about the question of who owned chainsaws, but having been assured by our electrician island-mate that the wire was still live, the Independence Road Chainsaw Revolution was an idea that had to remain just that. I decided to climb through the rabbit hole and take a walk with the girls down Main Street, and check in in person with the police, using the logic that it is much harder to ignore a real person than a phone call. My daughters could not have been more embarassed and horrified, and Eva was in all seriousness certain they were going to throw me in jail. Which would have been rather ironic given where we were living at that moment. 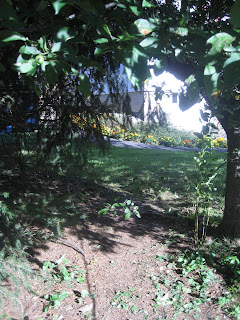 The "rabbit hole", our only method of getting in or out for 22 hours.

I didn't find any police at the police station (I'm refusing to spend any time thinking about why that could have been) but I did find the fire chief. I enjoy the fire chief, because when I asked him what his plan was if we had an emergency on Independence he looked dead at me and said "We have no plan, and we are pretty freaked out at the possibility." Despite the gravity of the situation, somehow his honesty and acknowledgement that we truly were in a serious mess made me feel better. I know, I'm weird.

Back home we went, where I discovered from a neighbor that I had just missed a reporter from the Lowell Sun. Being the squeaky wheel that I am, I was disappointed to have not gotten a chance to tell them how National Grid was useless, but I was thrilled to find out that my husband had been able to give them a statement. I have no idea if he mentioned me or not, but just knowing a statement came from our opinionated home I feel better. But since I had missed the reporter, I decided to take other action, calling WHDH, Fox News, and WHEB to report a trapped neighborhood. Fox was most intrigued because I was the third person from the neighborhood to call. They actually sent a helicopter out to do a fly-over.

And hotties, because I had called to report and intrigued them enough to gas up the helicopter, not 30 minutes later, 22 hours after tree smash, National Grid finally showed up and flicked whatever they flick to deaden the wire. Many of us were ready to flick something else at them. The town of Pepperell was immediately on their heels with a backhoe or some such tree moving monstrosity, and cries of freedom resounded from the citizens once trapped and now free to drive, walk, scooter, bike, ballroom dance, tumble, etc into the world at large.

Hotties, I thank you for reading this far. It was an experience, but one I am blessed to have come out of truly unharmed. I hope that all of you can say the same about Irene's visit, and that maybe you even have a new hurricane quilt to show for your time indoors.

Posted by Beth at Quilting Hottie Haven at 2:28 PM

Great story, LOL. I am in Methuen and maybe had more wind and rain than you. I had your same problem a few years ago in the ice storm and was out for 3 days. My daughter is disabled so I FREAKED. They moved the tree and broken poles so we could at least drive to a hotel. Within 6 months I had a generator. Came in handy on Sunday.