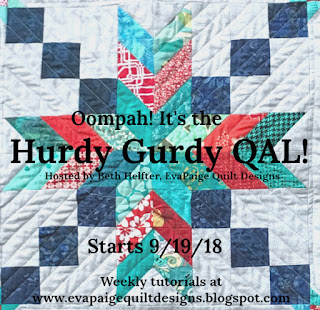 Cutting for a quilt is the spawn of the devil. It just is. 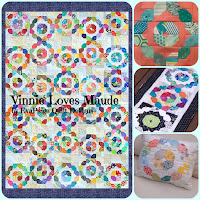 I suppose there are some of you out there who love themselves a good session of slicing up helpless inanimate objects for hours on end using sharp instruments. In another world we might need to worry that you were psychotic, but thankfully, we quilters get you. However I'm in the camp of quilters who would really prefer I could snap my fingers and be done with all my cutting immediately.

Side note - I taught a class last week of my Vinnie Loves Maude pattern (shown on right). Even the baby size, which I had them all cut for, has over 1000 pieces. In good news, no one killed me, though some grumbling commenced. In better, one of the students bragged that using her guild's AccuQuilt cutter she got it all done in less than an hour. So there's definitely that option. We all bowed down to her appropriately. 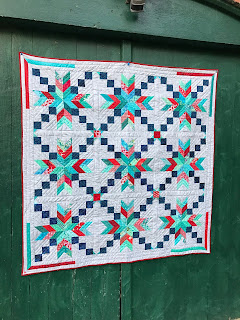 Hurdy Gurdy is one of the most popular quilt designs in the "Oompah!" book, and I'm pretty sure one of the reasons is because of the way all those fabrics come together to make the pattern look so cool. But "all those fabrics" becomes the problem of ALL THAT CUTTING really quickly. So the best thing to do is either decide, like I did, to make a table runner with just three blocks (cutting amounts, page 56), or steel yourself for the realities of the mind numbing dullness of cutting and just go for it with the amounts for the larger quilt found on page 51. I definitely find that rocking out to some 80s hair bands on Pandora helps, but maybe that's just me.

As a scrappy quilter, my cutting process isn't quite as straightforward as whipping some strips off my yardage and cutting them into the correct sized squares. For one, I don't want any of my fabrics to be the same in my blocks and if possible, my whole quilt, so cutting more than one or two of any particular fabric is useless to me. For another, I tend to be digging around in my scrap bins for pieces that are big enough for what I need rather than going directly to my yardage. I end up using a few different methods of cutting that may be of interest to you. Or not. But you're here, so you might as well read on.

The Stack, Smash, and Bang. So once I've chosen all my fabrics, like I did and you did in last week's tutorial, I'm left with a pile of randomly sized fabrics to work with, from all of which I want just one square (maybe two) cut. So I'm a big fan of just stacking those smaller puppies up, smashing them down with the iron just to make sure there are no creases, and banging out a stack of 5-6 squares at once. I do try to be cognizant (ooo! That's one of Mr QH's favorite big words - apparently I listen to him) of bias when I stack them, but let's be honest. I'm about using up fabric scraps and if I end up with one or two squares that aren't perfectly cut on straight of grain, I lose approximately zero minutes sleep over it.

The Fold and Slice If I'm willing to have more than one square of the same fabric, which now and then I will suck it up and do, I just fold over the edge of the yardage or scrap far enough that I can cut out two squares at once. Seem obvious? Yes. Thank you for humoring me. It's one of those things that I point out in the case that someone didn't know. We all learn these things at our own pace! The nice thing too is that I didn't cut a whole strip of yardage this way but still managed to just get exactly what I needed. I am a little cheap with my fabric - I love to use it up, but I also love to be efficient. On the other hand, I do toss small scraps and trimmings with reckless abandon. I know many of you are clutching your pearls at the thought of all the birds and dog beds that could benefit, but I'm a tosser. You do you, I do me, and we are all happy as can be. I think I just made that up and maybe it should be on a pillow. It can also be sung to the Barney theme tune if you must.

Do you own one of these OLFA rotating mats? If you are a scrap quilter and tend to cut from smaller pieces, or if you are any kind of quilter who ever trims anything, OMG. I totally recommend it. I used mine continuously while cutting out all my fabrics for my runner! Continuously! It started to yell for a union mandated coffee break!


The Piece to Piece Finally, sometimes I get obessed with using a fabric in my quilt but I don't have a large enough piece of it ready to cut. However I DO have enough of the fabric to be able to piece it together to cut the right sized square. In that case, I figure I already am going to have a million seams in my quilt, what's one or two more? I have no issue sewing some smaller pieces together so that I can chop them right up again. I definitely recommend open pressing of seams if you do this, though. It not only makes the seam flatter, but eliminating the bump you'd have with a pressed to the side seam also makes the fact that you have a seam there at all a whole lot less obvious. Another thing that would make it way less obvious is using tone on tones for this method when possible, which I did do as you can see in the photo, and using matching thread, which you can see I did not. However I wanted you to see it. Or I was lazy. Possibly both.

Eventually, you'll have those pieces all cut out. It's going to be a beautiful thing, truly. It's possible by that time you'll have also perfected your rendition of "Pour Some Sugar on Me," and if so, extra kudos.

There's definite joy in having all your pieces cut out and ready to go. There's also a time and place for deciding to just cut one block's worth of fabrics at once if it makes you feel more human. I tend to fall in that latter category. Whatever you need to do to stay sane during the cutting process, you do it. We aren't here to judge, we are just here to get you through it!
Next week is when the BIG FUN begins! So I hope you're keeping up because you don't want to miss the Oompah joy of the actual accordion making!

Posted by Beth at Quilting Hottie Haven at 9:27 AM