I am loving the blocks I'm seeing in the QAL FB group! And not one complaint about those tiny squares we dealt with in the last lesson! Yay! Either you conquered them with some of the tips or maybe you just knew I didn't want to hear any whining. Either way, I'm happy.

No matter how many blocks you have whipped up since our last lesson, they won't do a whole lot of good just sitting around your studio, dining room table, guest room, living room, or wherever it is that you do your sewing. It's my experience that quilters tend to average about 15 UFOs at any given time and we don't need this project turning into number 16 for you. So let's get them sewn together!

The big two decisions you need to make are layout and spacer blocks (or no - because depending on your layout, maybe you don't need spacer bars!) We'll start with layout, because as many of you have pointed out already, the possibilities abound and I might as well get you all a-twitter with ideas right off the bat.

or the baby sized version 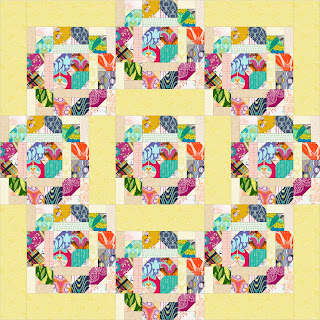 Both of these versions shown in the pattern use spacer blocks. I will never deny that I am not a fan of "blocks and sashing" style quilts, and therefore I'm always looking to set my designs in more interesting (to me) ways. Spacer bars come in handy for that kind of thing.

But that isn't to say you NEED them. In good news, I'm also a fan of blocks that form interesting (or at least some form of) secondary patterns when blocks are placed next to each other. I didn't love how my scrappy blocks looked side by side, but if your blocks are a little more planned with a more consistent background fabric, you just might love the look of them side by side in a grid:
Or on point - in this example I used the same blocks for the setting triangles. You'd have to slice some of your hard work to do it, but it could work. I'd probably sew it all together then square the sides off before adding the corner setting triangles. A little easier than doing more math!

Isn't it pretty cool how on point the lines of the block almost look wavy? It amazes me that these are just turned a different way - both settings are using exactly the same blocks!

If you are doing the larger blocks, this all works the same way, and you probably got a taste for how the lines get a little wavy when you saw the layout for your quilt on page 7 of the Vinnie Loves Maude pattern. I'd love to see someone add lots more larger sized blocks and make a twin or larger! But yeah, I don't have time so why should you either right now? I'll just keep hoping!

Then of course there is the photo you've seen a million times, but I'll show it again anyway: 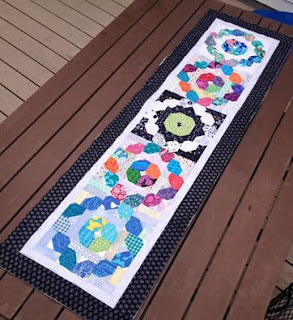 These blocks in my runner shown at right were set side by side, but because they were all so different, there is still plenty of interest in the design for me. But then there is Deb Hartman's award winning (for real! She won "Best Use of Color" in her guild's challenge!) runner, which uses all the same colors but that border fabric and added use of some appliques just ups the interest for me and makes the whole thing sing.

Don't you love talking quilt possibilities? It's almost as much fun as talking baby names.

What if you DO want to add spacers? And why shouldn't you? Not only do they add some interest to a setting, but if you have extra fabric, why not use it up? PLUS, as you will see, there is at least one way that the spacer bars can act as a self border!

There are two ways to look at the spacer bars - as solid bars, and as pieced bars. The pieced bars were what I chose for the cover quilt, because when I started designing this block and pattern, in my mind the background would blend well with the blocks. At first, I thought that this could likely be accomplished simply by using a single low volume fabric for all the spacer bars, and that in doing so it would totally blend right in with all the low volumes in the background of the blocks. I was oh so wrong.

Every time I looked at my quilt on the design wall with the one-fabric spacer bars, it was like my eyes forgot how to keep moving. Dead stop at every bar. It literally killed the momentum of the quilt.

Luckily, this was easily fixed, if not quickly fixed. All it took was another dive into my low volume scrap bins, some cutting and piecing, and the background really started to enhance rather than forestall the full design. Just seeing how much more movement these spacers gave to the overall look kept me going, even as I had to piece 13 large spacer bars and 4 narrower ones. 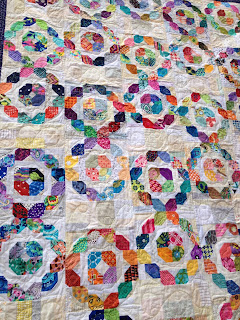 Page 4 of the pattern shows the basic pieced spacer bars in Diagrams 8a and 8b. In both cases, you can see I put the wider of the scraps in the middle of the pieced bars, but there is no reason you'd have to stick with that. As long as your spacer finishes at the right length, go crazy! Add more or less units! As I say in the cutting directions on page 2, you can even piece the individual units within the spacer bars if you think you can handle the excitement. Hopefully you can see in the above photo how I did that - look for the horizontal seams within those spacer bars and you've found them!

If you aren't in the mood for so much piecing, though, there really is nothing wrong with just using a single fabric for all of the spacer bars. I did it with a small version of the scrappy blocks, and while it is a different look, who is to say it isn't just as valid? There are no rules in my quilting world - there really shouldn't be too many in yours either! 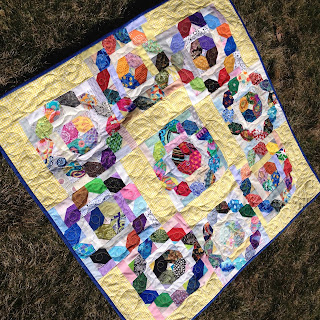 As I was working on my own new version of the Vinnie Loves Maude for the QAL, I discovered that combining pieced and unpieced spacer bars is also a nice possibility and adds even more fun as the pieced bars, if done as I did, create a bit of a self bordering effect. 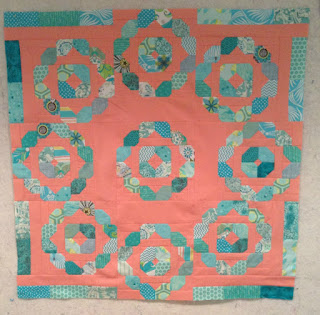 Granted this is only the top, so it doesn't look completely amazing yet, but I always like an unexpected and/or asymmetrical border. This border is sort of "incomplete," in that it doesn't border around the middle blocks in each row, but in my mind once the binding is on that will disappear a little as there will be blue all around. In my mind. We'll see how reality goes. In any case I personally really love the look of having combined some basic spacer bars in the middle of the quilt with some pieced ones on the outside. Just another option to blow your minds.

Spacer bars or not, the piecing of the top is really pretty straight forward. Combine your blocks into rows and your rows into blocks. If you aren't doing totally scrappy and you care a lot about where some of your fabrics end up in the rows, make sure to use a pin on the end of a row or the side of a block to remind you which end is up (or down, or right, or left....the key is to remember what you used that pin to tell yourself, which isn't always easy to do in my own studio, I'll be honest.)

One more piecing note, which applies not only to my blocks but also to the entire top construction. I'm coming out to you as an open presser. It's true. If you didn't know it, you do now. I've been pressing seams open for about three years. I started during a QAL run by Michele Foster called Aiming For Accuracy, and pressing seams open was her very first tip on being accurate.

To be honest, I thought she was slightly crazy. Seams are supposed to nest! They can't nest if they are all flatty and open on each other!


But then I gave it a try. And darned if it doesn't work.

For one thing, it's way easier to pin seams properly when you can actually see both seams and feel where they are flattened. Observe:


And then there is always the bit of slippage that can happen when butted seams come apart as they are being sewn. I honestly believe that is eliminated when the seams are nice and flat and don't contain ridges that can get pushed in the wrong direction, even slightly, by the presser foot.

While I don't care a ton about exacting points, I do have to say, pressing open has made a huge difference in my accuracy. It's something I recommend to just about every student to just try and see if you note a difference in your own accuracy. If not, go back to pressing to the side. Nothing ventured, nothing gained, right?


Posted by Beth at Quilting Hottie Haven at 11:59 PM