TWICE IN A WEEK, HOTTIES! That's how often I've released a new pattern over the last few days. Can you deal with it? I, queen of taking forever and a day to get a pattern to completion, CANNOT!

If we are being honest, this latest is actually not QUITE ready for the printer as of this very moment, as I'm waiting on the all important cover photo editing (as you can see, it's a little washed out looking over there, and that will never do in print), but it's good enough for a $5 intro price PDF download on Craftsy. Let's face it, I could not wait any longer to share the joy of this latest group project pattern, because, as always, I do love it oh so very much and I hope you will too! 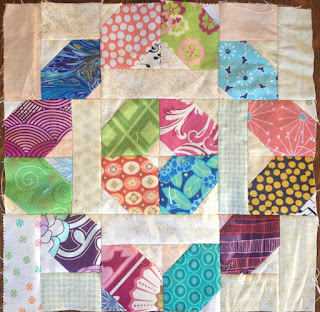 Eventually, my penchant for round-ish patterned blocks and I settled upon this scrappy little number. And by little, I do mean the block is pretty small. 10" to be exact. Smaller than I might I normally design? Maybe. But as we all know, I refuse to be put in a box in my design world, so figured what the heck. Off to testers/swap participants it went, with instructions to use modern prints and low volume backgrounds.

Then I did something new - actually, two new things; for the first time in the seven year history of my January group quilt project, I gave the process a name - January Jumpstart, and created a secret Facebook page called "EvaPaige Quilt Designs January Jumpstart," where my testers could gather and share pictures and ideas on what is modern and what is not, debate for hours on end about "low volume" and what on earth was I talking about, and chat amongst themselves about my awesomeness or lack thereof. The beauty was we could share photos and progress and news without anyone else seeing it as the secret group was secret. Go ahead. Try to find it. You won't. It's very stealthy of me, no? Definitely a good idea on my part and I'll do it again next year! Now and then I'm a smarty.


One reason I run one pattern test a year this way, allowing more opinions in than a designer probably should for their own sanity, is I actually do really like to have a gut check every year to make sure I'm on track with what the quilting public is interested in making, and a larger cross section of quilters than two or three is the only way to do that. And often the bell curve being bigger leads to stuff I would not have thought of on my own; in the case of this pattern, two changes were made, one being a technical writing thing that is boring and I won't go into but was included in the final pattern, and the other being the need for two block sizes, as testers liked the 10" one, but wanted bigger too. So the final pattern has two block sizes and three layouts - and of course who is to stop you there! Make all sorts of layouts with the block and share them with me. I'd love to see! 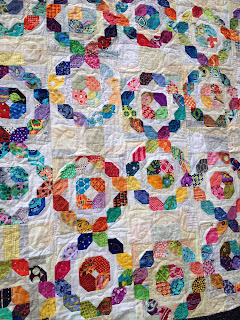 I had pictured this quilt would end up looking very modern,  given the modern fabrics I was requiring. To my great surprise, the amazing setting I fell into had a rather unexpectedly vintage vibe, and lead to the name Vinnie (vintage) Loves Maude (modern). I added the tagline "Vintage style and Mod fabrics in a classic romance" just in case my fancy little word play wasn't abundantly clear to those quilters who don't live inside my brain. Be happy you don't.

Another by product of group quilt projects can be that much as if you get 43 quilters in a room you'll see 5739 different interpretations of a 1/4" seam, pulling these 43 quilters into a project led to a few blocks just not wanting to blend with the others for whatever reason. Let me be clear - this was not a problem, and no fault of anyone, and there was no love lost between myself and testers. Different stashes and different mindsets of modern can lead to blocks with different vibes...and that can lead to another quilt entirely. And so it did! I love this adorable little scrappy number made with nine blocks and so far everyone I have shown it to does as well. There really are no mistakes, just more design opportunities! 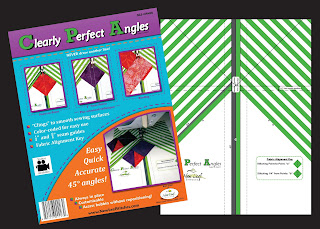 I won't lie, there are some small pieces involved in the smaller sized blocks, but using a tool like Clearly Perfect Angles by New Leaf Stitches makes things go smoothly. I didn't design this block with CPA in mind, but I will say I have used the tool for months, I love it beyond reason, and because I love it it is something I sell on my website and in person. A couple of testers decided to give it a go with this pattern and they were amazed by the ease! I will be offering a deal on my site for this pattern plus Clearly Perfect Angles for $18, just because I believe in it for use with this pattern oh so much - but once you own the CPA, you'll be sending air kisses my way constantly because it will make your life so happy with every project you are working on.

I hope you'll give Vinnie Loves Maude a try.

The intro price will last until Friday, March 25. Thank you as always for supporting small business and quilt designers everywhere; without you, we wouldn't be inspired to keep going!
Posted by Beth at Quilting Hottie Haven at 2:16 PM