Summer is the time for snowballs, didn't you know? At least it was around here this year, as I finished up my latest scrappy pattern, "A Snowball's Chance." I woke up this morning to the happy email that a couple of people had discovered it on Craftsy last night, so I figured it was time to officially give it a blog post all its own in celebration. Around here a pattern has to prove its worth first, apparently.

So does everyone remember this quilt from last Halloween? It was one of my Scrap Squad projects and the first Halloween project I ever made, because in all honesty, I despise Halloween and never had felt I needed a quilt to remind me it was the time of year of gross disgustingness all around. I still haven't figured out what possessed me to make a Halloween colored quilt, but I also have to admit it really is one of my favorites now. I actually really love it. Probably because unlike other "celebrations" of Halloween, this one isn't dripping in gore.

I'd never really worked much with the snowball block, but I kind of found it a relaxing way to bust some scraps, so I decided try a little something for my "inspired by" quilt pattern using snowballs. Those paying attention will recall that each of my Scrap Squad projects resulted in an "inspired by" pattern or project - otherwise my "Give it a Scrap Slap" lecture would be very short indeed. After playing around for a while I came up with the these blocks, which have snowballs sort of in a frame, or if we are being honest, the grey fabric almost makes them look like snowballs in a dirty window. Whatever. 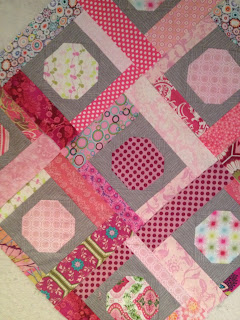 The blocks themselves were pretty simple to put together, and used up lots of my pink scraps in my bin. Not that you'd ever know.


As much as I know I'm not supposed to give big sneak previews of my new patterns on my EvaPaige Quilt Designs facebook page or IG, and as much as it is really not to my advantage because it takes me so long to get the directions like I like them and bring the pattern to completion, excitement always gets the better of me. I want to share, so I do. I am a rebel after all. So I did post this photo of the unbordered top, lounging on my outdoor lounge, back in June. You can tell it is June by the maple wingy things all over the deck and couch that I so fabulously didn't sweep away before taking the photo. 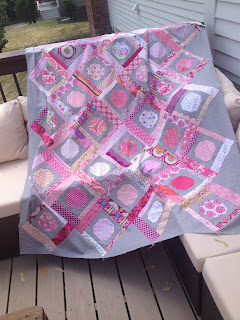 Almost immediately it garnered a ton of response, which let's face it, boosted my ego and sometimes you just need that. So that's another reason I break the rules. I'm a showoff. To their credit, not one commenter mentioned the maple wingies.

Obviously it needed a border, and I decided on some smaller snowballs to mimic the strippy borders of the Halloween quilt. So it was back to the old machine to chain piece my face off. 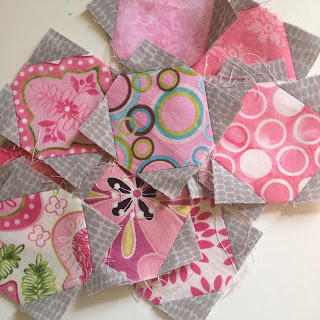 Eventually I was at the point where I had to face the fact that my cheapo fabric buying ways meant that I had no possible fabric in my stash that would both work color-wise or be big enough. Since my cheapo fabric buying ways also mean that I head directly to the sale racks for backings, always, this is the fabric I came home with. Another post on FB left the question of "Is this ugly or not?" unanswered, but was an entertaining debate. 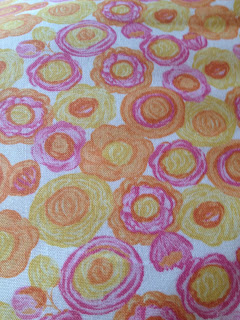 This was the summer not only of snowballs, but also of teaching my girls how to sandwich a quilt, which left them little time to fight amongst themselves over the crisis du jour. While I won't set them loose on it quite yet, they did a great job helping, even caught a wrinkle or two I didn't see, and I was able to get down to quilting that much faster. I chose to "curvy wave" (a technical term) the snowball parts of the blocks, mimicking what I had done in the Halloween quilt. It was easy the first time around, and I liked how it looked, so why not. Sometimes decisions are just that simple. 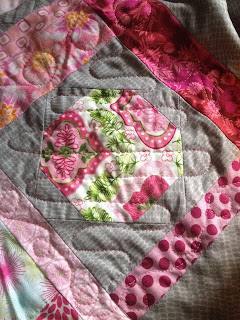 More curvy waves, this time linear, filled the background and borders. I'm a big fan of Leah Day's ideas about "busting through" to fill in your quilt with machine quilting with big patterns. The patterns don't have to be complex to get the job done and look good. You might even trick people into thinking you know what you are doing.


Since despite my cheapo fabric buying ways I managed to way overbuy on the backing, because math schmath, and because the possibly ugly fabric was not offending me much by the time I was done quilting, I decided to use it as the binding as well. A extra pop of yellow with the pink and grey was actually kind of surprisingly okay. Plus who can see it in this photo anyway? You also can't see the pool toys under the deck, which we so cleverly disguised with the length of this quilt.

But a photo with headless children and lots of dying grass does not a good cover photo make. So it was up to my photo guru chick to fix that problem. And voila! Once again, she amazes me. I refuse to even listen to her apologies about the wrinkle she couldn't remove because for the love of all that is holy, it looks amazing! 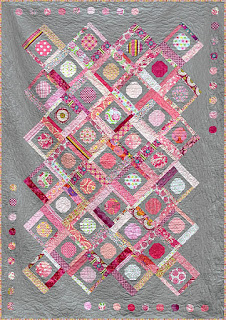 "A Snowball's Chance" is available now; pattern includes two sizes (50" x 50" and 60" x 80") and is appropriate for confident beginners, which I define as "anyone who has used a rotary cutter successfully, made a quilt once on their own, and is ready for a new project."

I'm really excited to bring the actual quilt with me to Wisconsin Quilt Expo next week, where it will take part in my "Give it a Scrap Slap" lecture at 10am each day. I'm so looking forward to meeting several of my midwest peeps and bringing my wacky to a whole new area of the country. If you are coming to the lecture, I might even let you touch this quilt. If that isn't a reason to sign right up, I don't know what is!


Posted by Beth at Quilting Hottie Haven at 9:42 AM

Totally awesome. I enjoyed your post and had answers to all the questions you asked and all the tips you share. But alas, I do like Halloween.