It's mid month, which means Drop and Give Me Twenty 2015 is halfway over already, and this is only my second blog update. We can all gnash our teeth and wring our hands and call me lazy, but besides my 2-3 hours of sewing every day, I've also kept from throwing my children in the snow and leaving them there during the umpteen snowdays, snow storms, nor'easters (for those of you not in a coastal New England state, that's Yankee for "redheaded stepchild of a blizzard" big ass storm) and blizzards (yes, plural) as well as cancellations of all sorts of activities brought on by said weather leaving me scrambling to make our lives work in a vaguely smooth manner.  But 2-3 hours a day DESPITE ALL OF THAT, people. Which just goes to show you, there are no challenges that cannot be overcome if one has hands, the will to live, and the ability to feel no guilt as one tells one's children they will be in the studio and not to come looking unless someone is actively losing a limb. In which case, also, just call me from the kitchen so you don't bleed all over my carpet.

Much of my sewing this month has been of the variety my friend Kelli refers to as "secret sewing," a moniker I have adopted as it fits perfectly. Two of the projects I can't show in their full unfurled delight as they are patterns in progress, but I am thrilled with the progress as both tops are done and the patterns themselves are cruising along.


It only just occurred to me upon posting those that I'm into the hexi shape as a block right now. Next thing you know I'll be EPPing.

Oh I know. That was hilarious.

I'm also thrilled to be included in Quiltmaker's 100 Blocks Volume 11, hitting shelves in May, and not only does this mean you'll get me in another blog tour singing the praises of being an "And More!" but it also means I get the opportunity to create a project out of my block and submit it for the gallery pages of the issue. So in more secret sewing, this week I made a really cute little project using my block and these super springy and cute fabrics.

What I love most about this secret project that you all can't even see, is that it already had an owner even at this "pile of fabric folded with great whimsy" stage. When I posted this photo on my FB page a friend of mine, who is celebrating a big birthday this summer, mentioned casually (eg hinted strongly that her birthday is to be celebrated worldwide) that this would make a great gift, and you know what? I'm at the point where I am drowning in quilts around here, quilts that I have made for reasons such as inclusion in the QM 100 Blocks gallery, that then don't really get used or fit in my lectures and they just end up languishing. I want them to have love, but I don't always know who would love them for me. This one, because Jeanne was bold enough to claim it right away, will have love. Granted she hasn't seen it yet and maybe she will hate it, but there is potential, and at least we know she likes the fabrics. She may even get to brag to anyone who will listen that it was pictured in a national magazine, but here's hoping that won't make her feel like it needs to be displayed in a glass case. Quilty things are made to be enjoyed. So I am thrilled to know this one will be. Sometimes it pays to just ask. 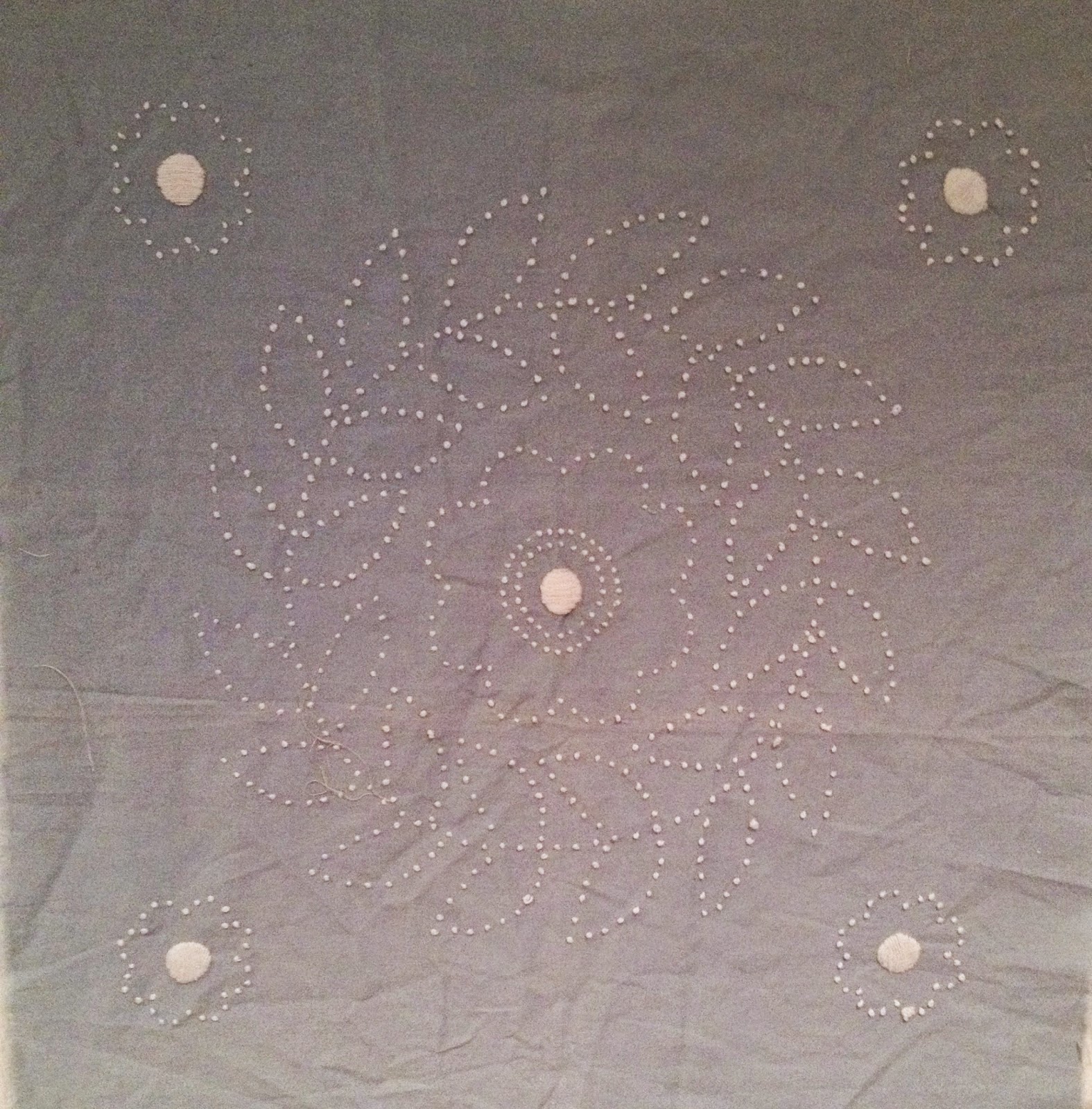 But all of this does not lead us to the 1980s portion of this post, with the possible exception of the tealish Oval Element fabric in that last photo that smacks of sunken living rooms circa 1985. So without further ado, anyone remember this gorgeous treasure I vowed to make more interesting as part of my DAGMT commitment?
No? I'd be hurt, but let's be honest. This is about the most forgettable item in the UFO bin of ANYONE who is participating, I am sure. I mean look at it. First of all, we have 1982's Pantone color of the year, Half Dead Seagull Blue, as the background. (Actually, I tried to find out what Pantone's color of the year actually WAS in 1982 so that they wouldn't sue me for defamation of character. You'd think there would be a chart somewhere on line. In any case, I'm sure it was something similar to this, but with a much catchier name.) Then we have ivory thread being used to candlewick the top. For those who do not have the honor of being a mother to an eight year old history prodogy, candlewicking is a fancy, 1980s name for French knots referring to the actual candlewicks colonial women used to use to make these types of projects.

A couple of important things to remember about this project:

- Back in 1735, this might have been the height of fashion. That makes me sad.
- Back in 1982, when I was 12 years old and sitting on my Ocean Blue comforter in my bedroom with Peony Pink carpet and Dove Grey accents, I spent actual time candlewicking this thing. That almost makes me sadder, and some of that sadness is directed at my own 12 year old girls who live in such a different world when it comes to leisure time than we did.
- I've moved about eight times since then, and somehow never got rid of this thing. Nostalgia? Maybe. Horror over the geeky child I was? Oh, definitely. Thoughts that I would someday turn it into something? Of course. 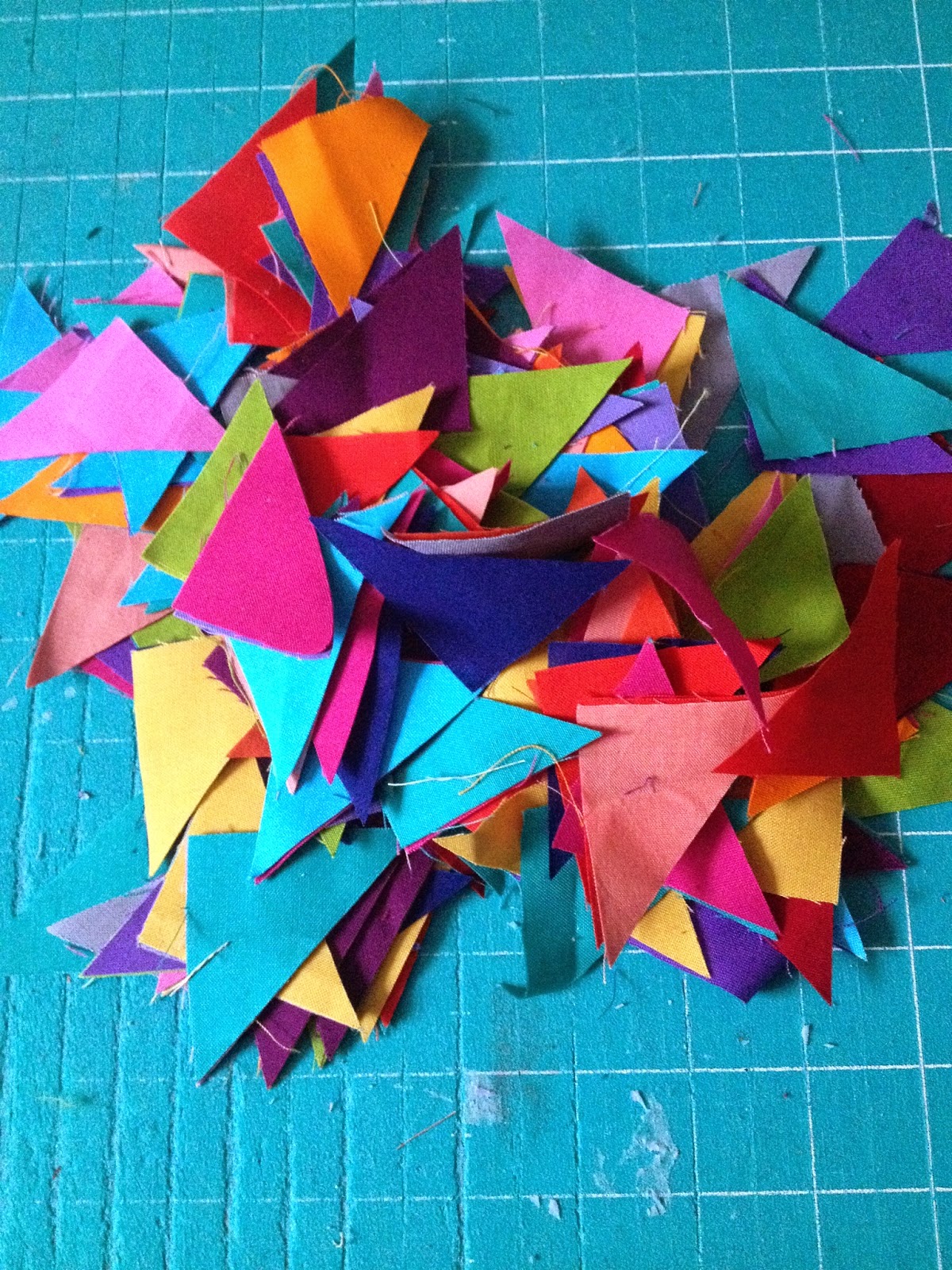 So this was to be the year. And inspiration struck me last week, and just last night I was able to initiate Phase One of "Playing With Fire" as I am going to call this thing. Get it? Candle wicks.

So this pile of scraps, trimmings from the Harlequin Shake quilt I was putting together, inspired me to VFW myself some new made fabric.(Victoria Findlay Wolfe. I've made her into a verb. I'm sure she doesn't mind.) However I didn't want to sew them all together. That would take forever and I wanted them to look like the crazy mess my life is this month, rather than all neat and tidy.

How was I to do this? Enter Mistyfuse. Enter a bit of a fight between myself, the iron, and what my daughter called "spider web stuff"; the next step was to lay out a bunch of trimmings on a sheet of Mistyfuse, throw another layer of MF on top, and fuse it all together. Randomness was my goal for the look of this made fabric, and I think I accomplished it. 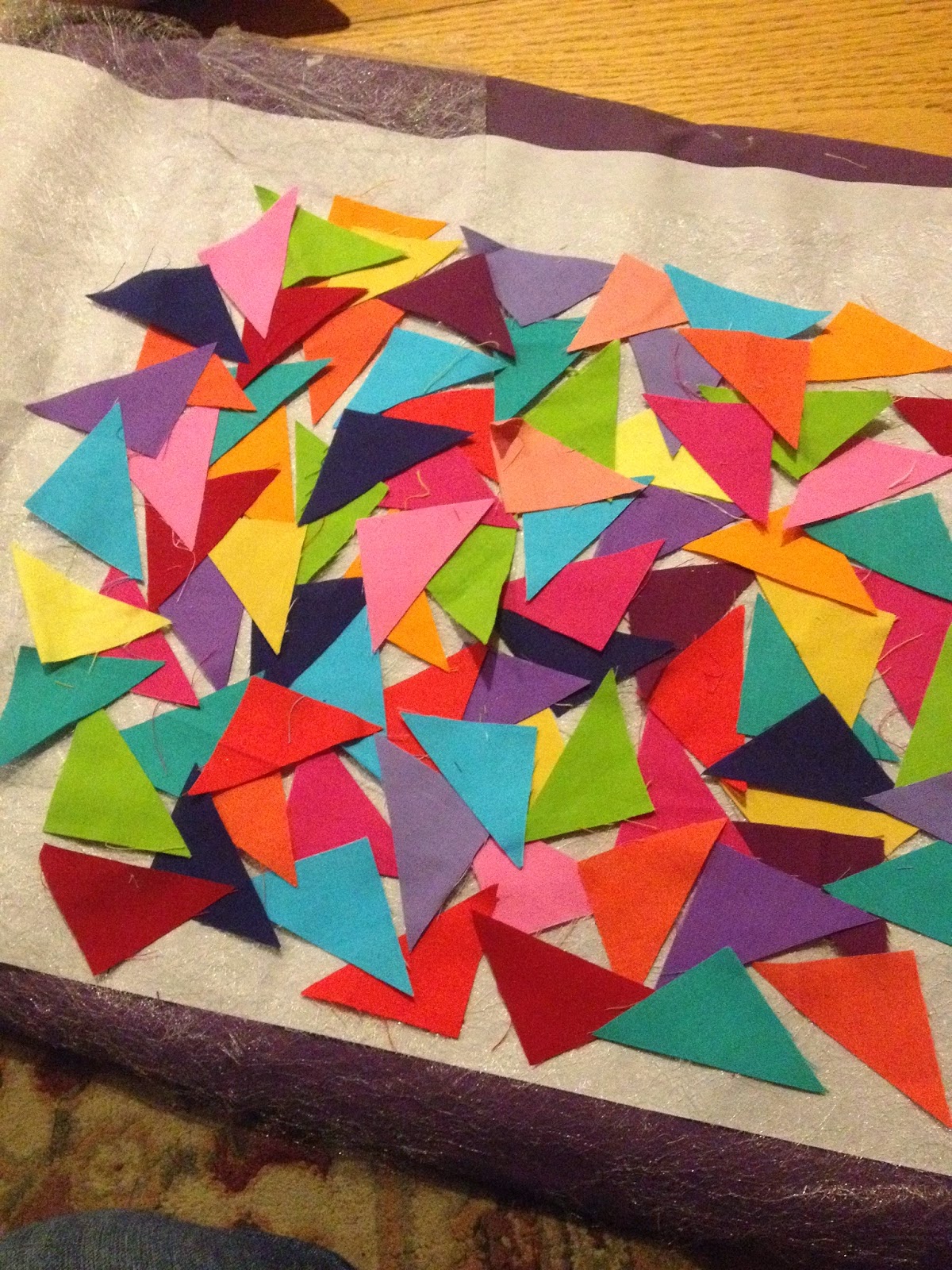 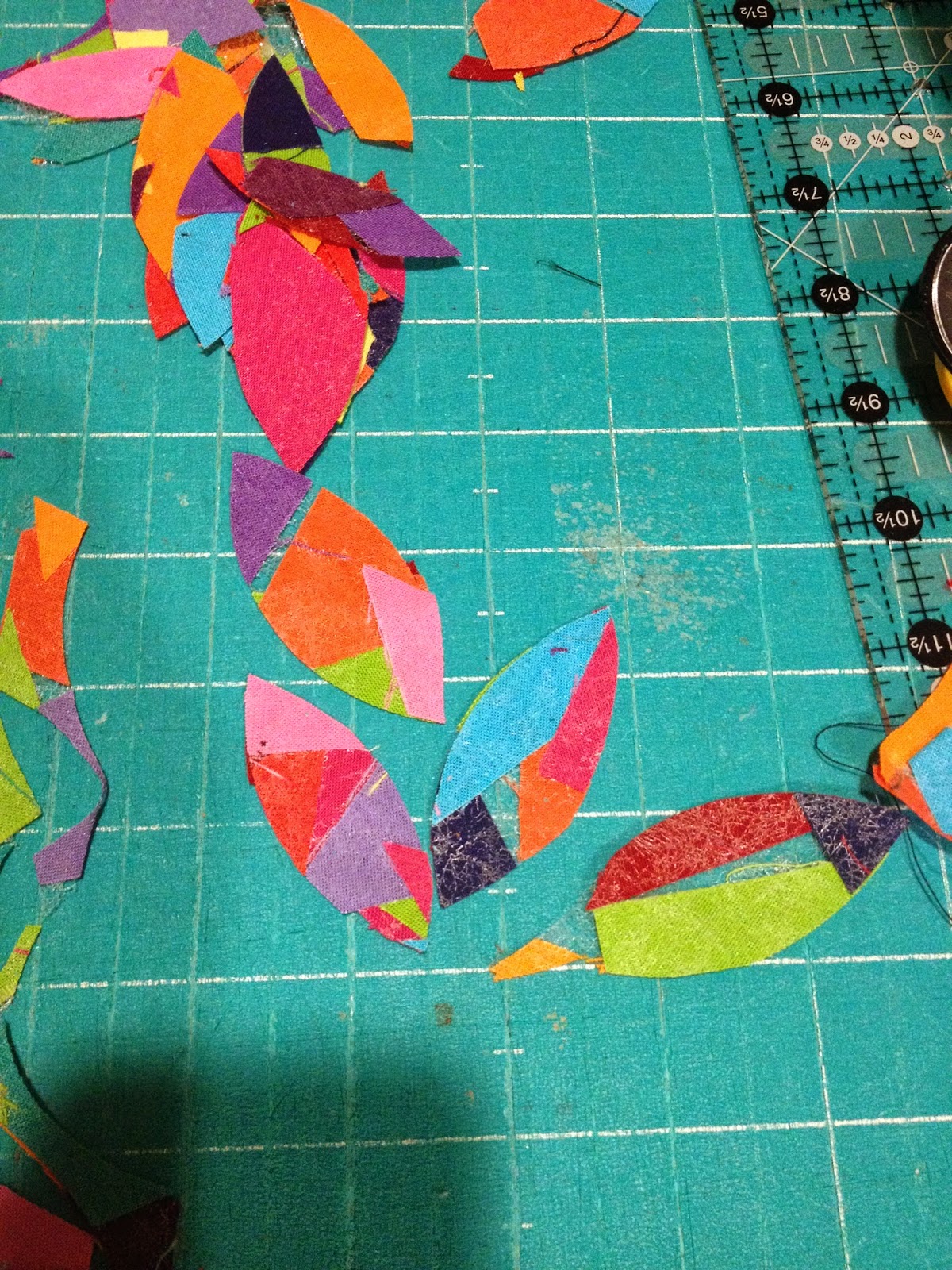 Once the fabric was all fused together, it should be noted that due to the haphazard way I created it, it was pretty unstable. Yet I cut out a bunch of petal shapes from it anyway. There may have been some swearing, but I was determined. I knew this would be cool and I would make this work.

I started laying out the petals inside of the French knot petal shapes, and of course all of them were way too big so I had to trim down even further. But it was starting too look pretty cool, honestly. It reminds me a lot of that Pinterest project where you take all your broken crayons and stick them inside a cookie cutter and melt them all together in the oven and make really cool new crayons. You do this on Snowday #1. By Snowday #4 you don't care if the children are shaving crayon ends into their lunches. 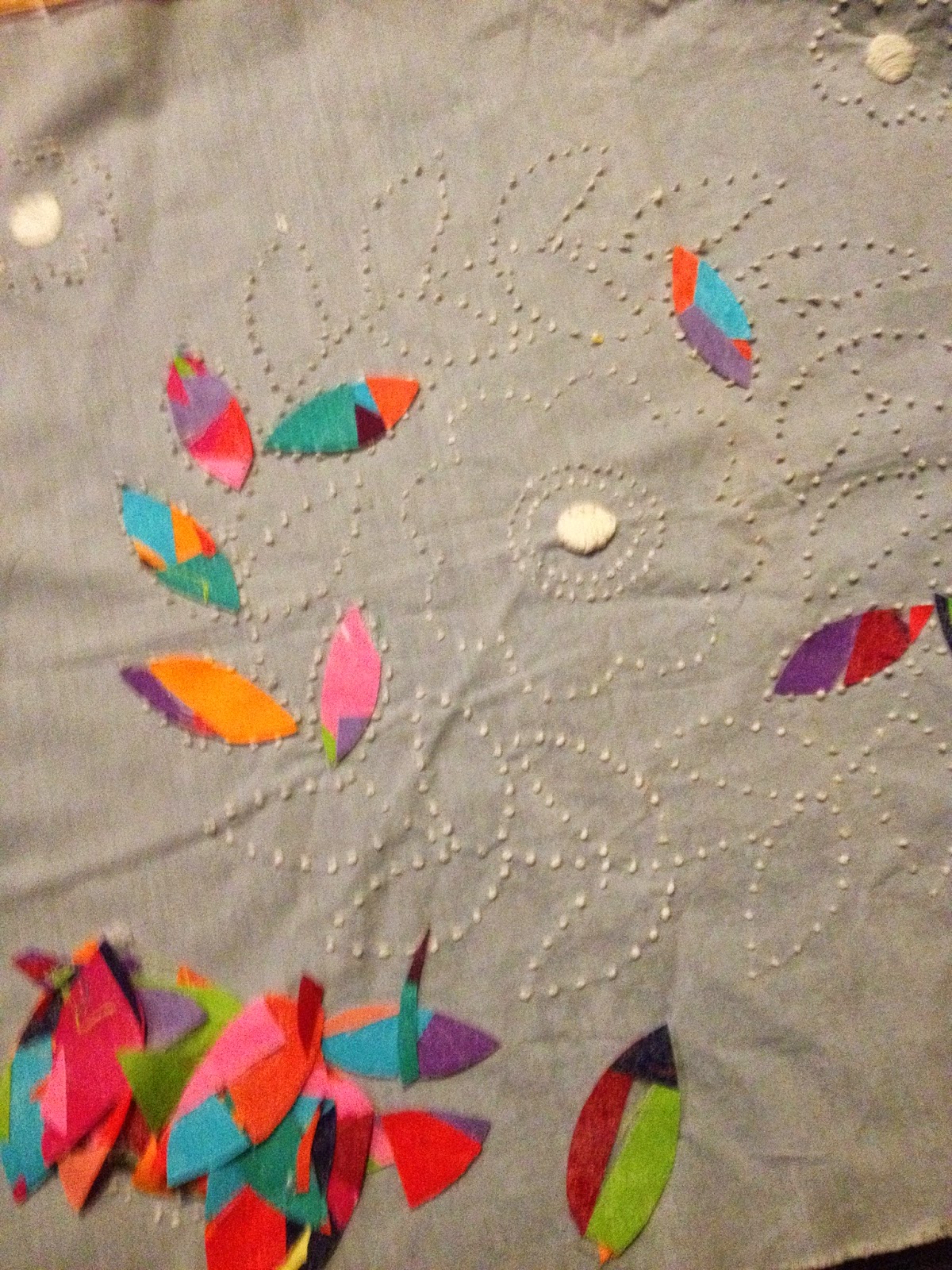 Eventually all of the petals were filled and I was oh so impressed with myself. I mean, come on. How much more amazing is this now? 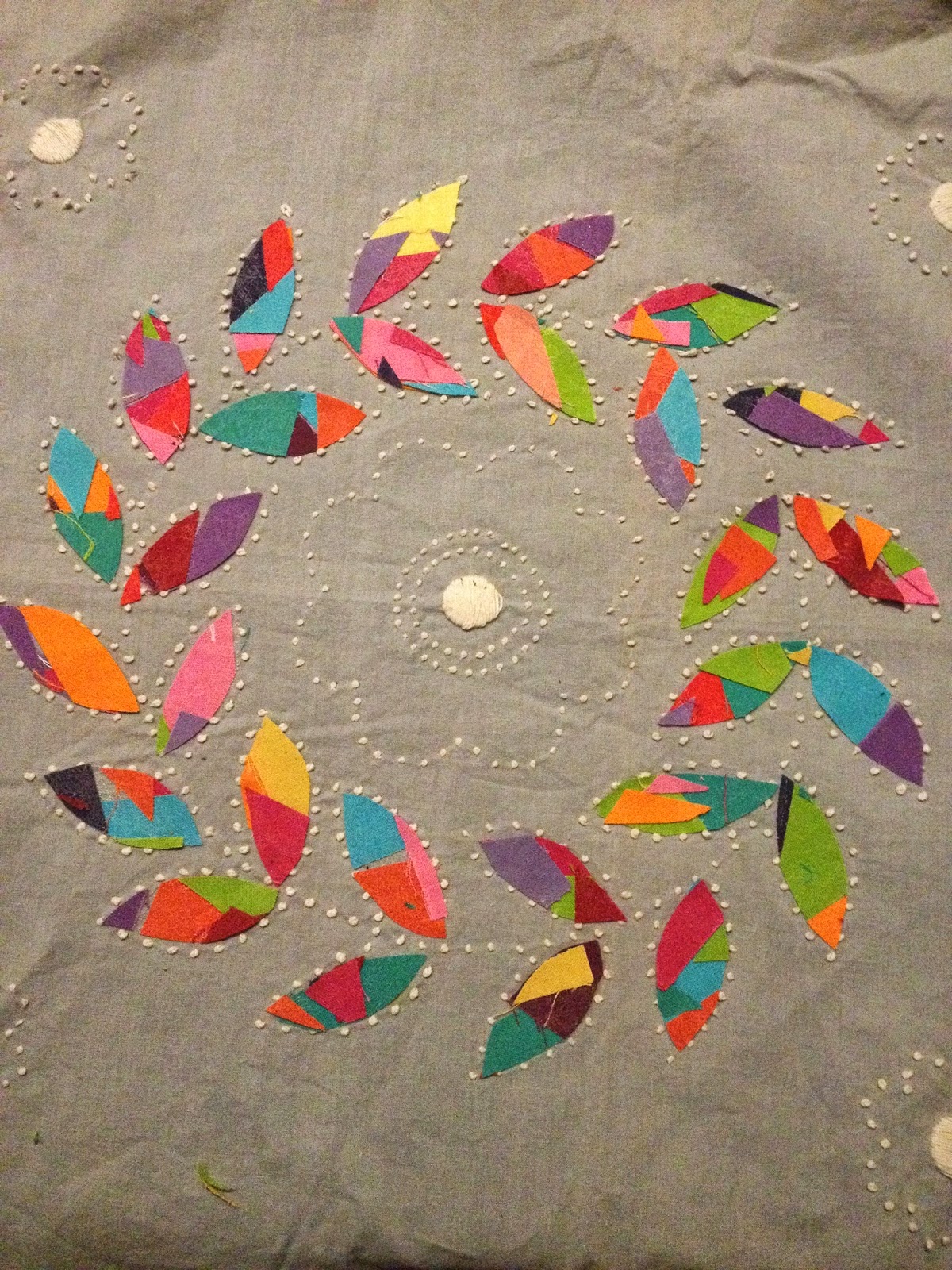 And I'm only getting started! Now I have visions of bobbin work, not that I've ever done it before, and some crystals and OMG I need to finish this post so I can get back at it.

1980s - OUT, something I can see finishing - Definitely IN! Yay DAGMT!

Posted by Beth at Quilting Hottie Haven at 11:23 AM

Email ThisBlogThis!Share to TwitterShare to FacebookShare to Pinterest
Labels: candlewicking, Drop and Give me Twenty, made fabric, scraps, UFO, Victoria Findlay Wolfe

Okay - the new look is absolutely beautiful. Old meets new and they make a baby. And wow, what a baby! I wish I had been the 12 year old geek, candlewicking in my room, instead of doing some of the stupid stuff I did instead...

When I was 12, I took first prize in the school girl knitting class at the local fair, for my knitted golf club covers. How sad is that.
Love your revamped candlewicking.

Hey Beth, I think if I forage through my "stuff", I may still have an unopened 1980's candlewick pincushion kit or two. That just might be a project for next year's DaGMT!

You're making me feel old. I was birthing babies then, #2 of 5. My geeky self (a decade before you) was crocheting to all sorts of music, including Moody Blues, Beethoven, Sinatra, Boots Randolph, and TV programs too.

I'm looking forward to seeing the completed Harlequin Shake quilt. Every time you post a picture, I keep trying to recognize my blocks, but you've sewn them so well that I can't tell. lol

ps We're finally getting some snow here south of St Louis, but nothing anywhere near you.