I'm having one of those weeks wherein I am chained to my sewing machine being fed only water and chocolate, while immersed in the continuing adventures of Jamie and Clare being read to me from my iphone. While on the surface it sounds like a good kind of life, in the heat of the moment it can seem very much like a record with a skip (I'm barely old enough to know what that is), and I needed a break. From the sewing. The handful of autumn colored M&Ms sitting here next to me can attest to my refusal to break entirely from the chocolate.

Except in my mind he's minus a beard. But that is neither here nor there. What is here and there and everywhere right now is this quilt, which you've seen in snippets and drips for months now and which on a whim I threw on my FB page a couple of weeks ago in the form of this photo.

Like I said, it was a whim, so imagine my shock when only seconds later a chorus of pinging began in the form of the little bell that goes off when someone likes or comments, and I realized I had better get this baby finished.

Those who are FB page members will also recognize it as the photo that touched off Retaining Wall-Gate 2013 here at home, with Mr. QH not appreciating the fact that NONE of the comments had bothered to mention how completely amazing and astounding the retaining wall the quilt is draped over artfully and which he spent hours upon hours slaving over in the heat of last summer building is, as apparently he had not gotten the memo that this was not (at) all about him. Many of you rallied to support his retaining wall building skills, and he thanks you. I call pandering.

Once we got beyond my lack of professional craftsmen courtesy in not giving full credit to the props department, Mr. QH agreed that perhaps I should just lock myself in the basement and finish the damn thing already. So that is what I have mostly been doing. Pattern is written, testers are testing, and a debut will be made at A Quilter's Gathering in just three weeks.

Side note - I can't be the only quilt designer who starts out merrily enough with a new design, but by the home stretch is slinging mild obscenities at it every time she talks of it and is shooting lasers out of her eyes at it even in passing, can I? Can I, Terri Sontra?

Terri says no. Don't you, Terri?
There have been a few bright spots in the drudgery of the last ounces of pattern completion, most notably in the form of my discovery that the Quilt Halo, this round red thing pictured here and which I was cajoled into buying at a show this summer by a vendor who let me play with one at her booth and made it all sound so easy, is my new favorite toy. I say cajoled because I generally buy a notion or quilting accoutrement only when I've done extensive research, am shopping online and on my third glass of wine, or both. So to make me buy something I have never heard of within five minutes of showing it to me when I was stone cold sober can only say to me she used witchcraft or similar. But I thank her profusely. This thing is fantastic. I mean, LOOK at those tiny little stitches, and all in control, not splattered about the quilt top looking like something my seven year old did, which can be my normal FMQ. I'm in love with it.

In non-quilting related exciting bright spots, my daughter Eva is in a play three towns over from ours, which means I am living in the car. The other day I decided to pop into an antique coop I've been passing six times a week (but who's counting) and lo and behold, I found the answer to my bathroom vanity redo issues in the form of this baby.
I'm so excited to find a perfect basin and faucet for the top and turn it into a yummy new bathroom fixture. Now to find new hiding places for the cleaning products that live under the current sink.

Also on the Actress Transport Route is Cobblestone Quilt Shop, where just yesterday I found the greatest backing fabrics for two Christmas quilts I need to finish as soon as this damn (there it is again) quilt is finished. 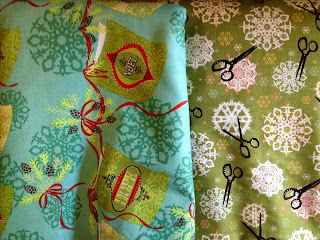 The scissors and paper snowflakes is just the cutest thing ever. I cannot believe it was on the clearance rack! But it should be no shock that I was shopping the clearance rack; best place in the world to find backings.

My forty minutes of break from the quilt is over. In good news, I believe I hear Jamie calling.....

Posted by Beth at Quilting Hottie Haven at 2:40 PM

Oh, yes. I usually go through several love-hate cycles with each quilt. I start out loving it, or at least loving the idea (art imitating life?), then I get bogged down in some not-so-fun cutting or construction step. Once it starts to come together, I start to love it again, then at some point I start to worry that it isn't going to be the masterpiece I had thought it would be. At that point I just want it FINISHED. In the end, I usually decide it turned out just fine. P.S. Give my regards to "Jamie."

Oh, I cannot express how deeply I feel your pain. I will be having a cocktail in your honor this evening...maybe even two...anything to help out a friend in need...