My husband was in rare form last night. As I sat down with the laptop to "do some working" as my youngest used to say, he asked this amusing little question:

"So, do you feel like you are getting everything done that you wanted to this summer, quilt wise?"

Even more entertaining was the genuine look of surprise on his face when I answered, "Not even close, and every day more gets piled on, which is great, but I'm quite possibly going to have to lock myself in the studio come September, so you might want to start planning to pretend I don't live here anymore for a few weeks."

What he doesn't know is that locked in the basement with me will be my audiobook of "Outlander," but he will thank me for that later I am sure.

This being a camp week, though, I've been able to actually accomplish a thing or two, which helps my overall sense of being more than just a pretender to the design world.

"Pick Me!" remake is done. I just LOVE these fabrics. And the Phoomph leaves are pretty cool, too.

Well, I could ask for one more thing, but I don't have to because I used it, too....Kreinik iron-on braid. See those gold trailing vines? Iron-on braid. SO easy. SO fun to work with. SO quick. And SO striking, if I do say. If you don't say, humor me.

The quilt itself will make its debut at Maine Quilts this weekend, although the actual rewrite is not quite done due to technical difficulties up to and including summer vacation and a wise guy husband. But the original pattern is still around until I get the new one printed. 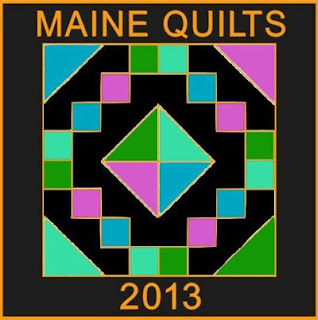 Also making a debut at Maine Quilts will be my "Scrap Chop Suey" scrap boxes, chock full of enough scraps to make a completely scrappy baby sized version of "Kickin' Stash", which much to my delight continues to be a very popular pattern. And I do mean chock full. Should you choose to live out your fantasy of getting your hands on a designer's stash and purchase one of these, I bid you a friendly warning when opening it, as a small fabric explosion due to pressurized contents that have been stuffed in to within an inch of their life may occur.

Here's hoping I don't horrify anyone who checks them out this weekend. With me you just never know. I'll be making my triumphant return to MQ on Friday, having not been able to come help in NEQDC's booth since like 2008 because we are always in MN this time of year, so stop in and say hi if you can!

Biggest excitement of the week was finding out I will have a block in the upcoming Quiltmaker's 100 Blocks issue this fall. I was lucky enough to meet Carolyn Beam in Portland and I am now feeling happy that she seems to like my stuff as much as she said she did. Obviously I can't show you the block or tell you anything about it beyond it is made of fabric, but it is exciting and I believe I can share that much.

Close on the heels of that excitement was this intersection of points in my latest block for the Aiming For Accuracy Quilt-a-long.

Right? But never fear, here is the finished block.
The fact that the center is totally off proves that I did indeed make this block and that I was indeed just plain lucky with that point, which I believe is the only really good one in here. But give me props for getting all my trees going the right way, won't you?

So today I am off to visit Jamie in the basement and get some demo stuff ready for Maine Quilts on Friday. I'll also spend some time panicking about September, but that is just par for the course at this point. I'm also going to be putting some finishing touches on my plans for my midsummer giveaway, which will take place right here next week. It should be a good one! Alert the presses! Tell all your friends!


Posted by Beth at Quilting Hottie Haven at 10:48 AM

Email ThisBlogThis!Share to TwitterShare to FacebookShare to Pinterest
Labels: Aiming for Accuracy, Maine Quilts, Pick Me

First off, congratulations on your selection for Quiltmaker's 100 Blocks vol. 8! Second, love-love-LOVE the Chop Suey idea. Third, if you need someone to look after Jamie while you're at Maine Quilts, I'm available. ;0)

the apples are so cute. nicely done.

The Aiming for Accuracy is all about learning. I am working on getting my blocks the correct size which means really paying attention to my seam allownance. I am getting close.