Christmas Delights of the Furry Kind

It's that time of year again. We've decked the halls after the annual discussion of white vs colored lights on the tree, the girls are bouncing off the walls with Christmas joy, we're trying new cookie recipes, shopping, wrapping, making general merriment, and oh yeah, hosting our yearly rodent invasion. 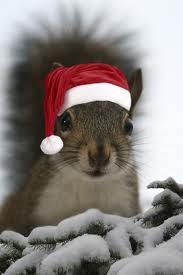 Yep. It's beginning to look a lot like Christmas indeed.

Just about every fall, we get a mouse or 87 in the house. It is icky, and maybe I should be completely horrified, but I am assuming that we're not alone because if we were there wouldn't be an entire industry devoted to extermination and a whole aisle of traps at the hardware store. It's New England. We're overrun with field mice. As long as they stay out of my pajama pants, which on the fateful day of October 10, 2011 was not the case, I'm good with setting the traps and listening for the sweet sound of a great big SNAP-aroo, and calling in the husband to deal with the corpse. 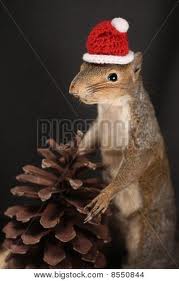 Unfortunately, for whatever reason, the family Helfter is also now and again plagued by a rodent of another kind at Christmastide. By the amazing amount of images available when one googles "Squirrel in Santa hat", I'm guessing we may not be alone in that either. But I bet we have the best stories, so I'm about to tell them.

"Santa Squirrel 1: Shimmy Down the Chimney"

It was 1995, the first Christmas we were married. Joe and I returned home from Christmas Eve services and things were amiss. Several pictures were askew on the walls. The toilet paper roll was unwound. Several ornaments were on the floor under the tree. I thought we had been broken into, but my wallet was sitting on the kitchen counter untouched. It was then we noticed the ashy little footprints all over the kitchen counter.

Yes. A squirrel came down our chimney on Christmas Eve. We just can't make this stuff up.

We tried to find it, but squirrels are remarkably adept at hiding when they see angry people wielding brooms and trying to kill them. So since we were leaving in the morning for 4 days in Minnesota, we called the landlord to let him know he'd have to come deal with a squirrel in the house.

His reaction could not have been less enthused, less concerned, or more asinine, telling us it was probably out already ("How do you figure?" we asked. "It walked out the door when you came in," he said. See. Asinine.) But he promised to come by the next day to check it out. We somehow managed to sleep in the place with a squirrel in it, lurking, ready to pounce. 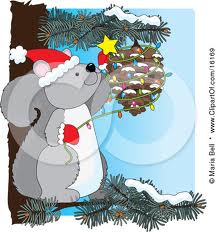 We returned five days later to a neighbor telling us they had seen a squirrel in the picture window a few days ago. Fantastic. Upon entering the house, we found the sliding glass door open wide, more ornaments knocked off, dirty footprints all over the furniture, poop EVERYWHERE, and perhaps the most insulting to me as a quilter, a half-eaten bagel on my sewing machine.

Another call to the landlord, telling him he was going to pay for a professional cleaning (he did), and asking what exactly he had done to deal with the squirrel in our absence. The answer: "Well, I came over yesterday (YESTERDAY! FOUR DAYS AFTER WE TOLD HIM WE HAD A SQUIRREL IN THE HOUSE!) after your neighbor called me and I opened the back door so he could walk out." And left it open 24 hours so that anything else could walk in, including vagrants and thieves? "Um.......yeah." Again, asinine.

We moved eventually, but looking back on it, we should have just opened the door and walked out earlier.Or maybe left some poop behind.

Which brings us to 2012, "Santa Squirrel 2: Gettin' Nuttin' For Christmas"

When we added our family room and redesigned our roofline several years ago, the builder, whom I am convinced was a first degree relative of our former landlord, left a 12" x 18"ish opening in the wall between our garage attic and our house attic. We never got a good answer as to why, and he never did come back to fill it in even though he promised to do so. Said opening will now and then allow a squirrel to get in via the garage attic, and we will be treated to the dulcet tones of a squirrel pretending to be a bowling ball and propelling himself across the floor and into walls all night long until we can trap the damn thing and let him out.

This year, we got an even bigger delight. 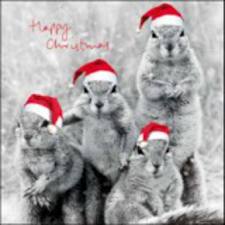 Yes. A squirrel family. And this time they are taking over.


A few days ago I was in the process of returning the tree ornament bin to the attic, and my hand slipped as I was turning the attic door knob. Or so I thought. I tried again and discovered that for the first time in the 14 years we have lived here, I was locked out of the attic. Joe was away visiting his parents in MN, and I got a little freaked out. Our phone conversation:

Me: Um, I was trying to go up to the attic and the door is locked from the other side.

Me: Locked. From the other side.

Me: I guess. Or maybe someone is in there holding the door shut. (I actually sort of believed this was happening because I get freaked out like that when he goes away sometimes.)

Joe: It would have to be an elf. I don't think you have to worry about an elf. (He did not say, but I heard in his voice "Because you could just get the fishing net and catch him and make him make you toys. OMG who is this woman I am married to?")

Me: Okay, well then, do you think the SQUIRRELS did it?

So yes, for lack of a better explanation, we are pretty certain that a squirrel throwing itself against the door, which also would explain a large bang I heard a day or so before this discovery, accidentally locked the door, locking us out of our own attic unless and until we can hire an elf to crawl through the hole and let us, and several traps, back in.

Meanwhile, the party continues unabated up there.

May your days be merry, bright, and rodent-free this holiday season. Chances are good for you though, since they are all over here at my place.

Posted by Beth at Quilting Hottie Haven at 9:36 PM

Email ThisBlogThis!Share to TwitterShare to FacebookShare to Pinterest
Labels: squirrels in hats, squirrels in the chimney

New England is not alone; we have dealt with some very stubborn Confederate field mice every year I have lived in this house (27 now) and, more often than I like, roof rats. (I live next to a city drainage ditch~ they come out through the pipes. Ew.) But new this year~ I came home one day and found several of my potted plants and flowers on the front porch--including artificial flowers I put up as a joke for my DH-- were uprooted. I repaired the damage but it happened twice more. On Thanksgiving morning I stepped out on the porch to get the paper and caught the sneak in the act. It was a squirrel burying pecans from the tree in our backyard! He sat on the porch rail as I sternly advised him to find another place as I was going to replant for winter soon. He flicked his tail and left. He hasn't been back.

I'm sorry, but I just had to laugh at your descriptions!

I hope everything clears itself up quickly so you can enjoy Christmas.

oh my goodness.. how in the world did i miss this?! scary, and equally hilarious (okay, mildly funny, not really hilarious at all!), i totally feel for you. i would be freaked out if c were out of town and something like that happened. and even if he were home truthfully. we have caught a couple of mice recently too.. tis the season. next to your squirrels, mice are sounding like a walk in the park. squirrels can be so obnoxious! i once stayed at a b&b where the owner had squirrels that ate all of her birdseed out of the feeder, so she got motorized one that threw the squirrel off by way of spinning in circles, activated by the weight of the squirrel. birds wouldn't activate it, but squirrels would. the squirrel got so mad that he chewed up the eaves of the house! !?! you could see the chewed up areas from the kitchen windows. crazy. i hope the squirrel is gone!

I so enjoyed your stories today. Thanks for the laughs! So the other day I was thinking that we get ant infections several times a year - so annoying - and if we just moved from here I wouldn't have to deal with them. Then I thought, well where ever I move to, they probably have something else that is just as annoying, I just don't know about it. Well, today I found out!
LOL