Surviving the merry month of May

A couple of years ago I created an album on my personal Facebook page entitled "Why moms are exhausted in June". It featured photos of the myriad of end-of-the-school-year ceremonies, recitals, plays, parades, and general insanity that come together to make even the work at home moms like myself who dread summer as it means we have to continue to meet deadlines along with making sure our children are entertained 24/7 beg for mercy and for the school year to come barrelling to a close so we can just breathe again.

Can I get an Amen from the crowd?

That was before I switched my daughters' dance studio to one that has recitals in May, third daughter decided to go into drama and voice and plays and lessons are in May, Girl Scouts moved bridging earlier, third grade features several end of year projects that involve parental help because for some reason MA still doesn't let 9 year olds drive, and oh by the way I have four major engagements between May 12 and June 7. This year's facebook album could be entitled "Why Moms just want to make it to June."

In no particular order, the highlights of my May so far:

1. The entertainment value of showing this quilt 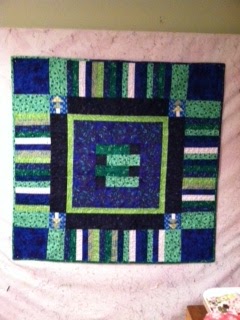 which is my own example of what I made in one of my "Round Robin in a Day" classes, and having two people who attended the lecture both insist that they want the pattern to make it. Really? This thing? Hanging it on my design wall and snapping a photo and not even cropping it before inserting it in my blog is too good for it. But whatever. It made me feel special and gave me some interesting insight into what appeals to people. Not that I can figure out why.

2. Watching my big girls become Junior Girl Scouts via throwing brownie mix off the bridge. I was less than thrilled to be asked to be the person to collect the bags of mix after all 11 of them had crossed over until I realized they were all still in the original packaging. P and E's excited announcement that they were going to "Toss brownie mix at the crowd" had me thinking I would be right in the line of fire to be covered in brown dust. What a way to end my year as Cookie Mom that would have been. 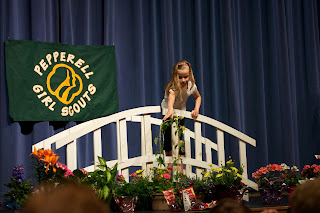 3. Finding out that I can republish Quite Contrary as a self-published pattern under new directions and with some changes. Score another point for Quilter's World magazine and how nice they are to work with. I will need a new name, though, so I'm looking for suggestions. And I'm shopping. Check out these cool fabrics that just scream The Merry Month of May to me that I bought just this morning from www.thequiltedcastle.com.

4. Always a highlight is the 97 hour long dance recital. But I do enjoy watching my two dance very much, as well as all the other kids I actually know in the show. However I would be lying if I didn't admit to being happy to have my Wednesdays back until September. 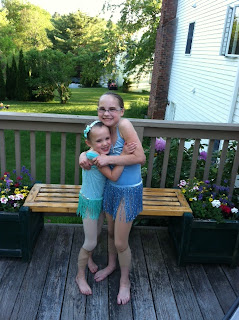 5. As many of you know, I am a college graduate business owner book group member fairly intelligent woman. Who just so happens to be a total cheeseball who watches the train wreck of the century, The Bachelor. I blame Lincee Ray and her hilarious recaps on her blog "I Hate Green Beans" for my inability to stop watching. And no, the recaps are not enough. She's so fabulously snarky and sarcastic (sound familiar to any other bloggers you know and love?) and inserts such awesome pop culture references to the ridiculous goings-on that I am lost without actually watching. In my defense, I do try to be EQ-ing or binding or cutting while watching. Most of the time, anyway. I truly believe it makes me a better mom to daughters because I will do all I can to raise them to have self esteem so they don't end up like those wackos.

Anyway, knowing how much I love when people comment on here and/or seek me out to semi-stalk me via email, I couldn't resist sending her a little note to thank her for her hilarity and tell her that every now and then I even get traffic to my blog from hers and I find it wonderful to know I am not the only quilter in America who binds to the dulcut tones of "amazing journey" while waiting for the season's first half-Mesnick over the balcony. And she wrote back, proclaiming me a Quilting Hottie extraordinaire with the words "You own that you are young, fabulous, and a quilter. Quilting is the new knitting. Work it girl." Somehow that just made me laugh and I had to share.

Now it's on to the Memorial Day parade, a major cleanup of the studio, and off to Virginia in 10 days time. The old adage "You can sleep when you are dead" may just be what helps me get through.﻿

Posted by Beth at Quilting Hottie Haven at 10:40 AM

Wow--I'm surprised you don't just lock yourself in the bathroom until June. lol With a TV of course. So you could watch The Bachelor. ;) I need a nap after reading your post.. sitting down! I can't imagine living it.. although I am, to a lesser degree. Which is the real reason I probably need a nap. :)