It's likely in stores this week, so you no longer have any excuse whatsoever not to have read the quintessential article in The Quilter (April/May 2011), "Strength in Numbers". 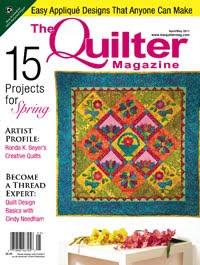 Bright, cheerful, screaming to be thrown into your basket at your favorite fabric store. Don't let the lack of mention of the article you are seeking out on the cover fool you, it's in there. Page 82. Did I mention that?

I so appreciate you all humoring me. But today I want to share just a little about how and why we ended up writing the article in the first place, and how it got into such a fantastic magazine, besides just plain old luck. I promise it's actually a pretty interesting story.

Last August, NEQDC was vending at Maine Quilts in Augusta ME, a fantastic show if you have never been to it, and our next door vending neighbor was the fabulously talented, incredibly funny, too darn cute and sweet for words, and let's face it 9,000 times more famous than us Jo Diggs. We got to know one another a bit and she was very impressed with us (who wouldn't be, really?) that we had taken the concept of shared vending and run with it so successfully, a concept she had never seen pursued before in the industry. She suggested that we write an article and submit it to some magazines for publication because it was a new fresh idea. We knew we had something great, but really hadn't considered that we were doing something others might be interested in learning more about. But we told her we'd do it. And when you tell Jo Diggs you are going to do something, you do it. (Here I am totally kidding. The woman is truly adorable and not fearsome in any way.)

A few weeks later my children finally went back to school for the fall and gave me a moment to collect my thoughts, and in those thoughts was the idea of a magazine article. I volunteered to head up the project and no one else in NEQDC objected, which means one (or both) of two things:

1. They thought I could do a good job.

2. They didn't want to do it themselves.

So I was hired. I collected photos from everyone as we wanted to include at least one quilt from each of us to show how we all have very different styles, asked for some quotes about why we thought we worked well together and what worked for us at vending sites, wrote the copy and included photos, sent it out to NEQDC members for approval, rewrote where suggestions for improvement were made, sent it out for approval again, again rewrote where suggestions for improvement were made, sent it out with the declaration that I was not rewriting anything else because I had other things I wanted to do with my life than cater to these people (again, I am totally kidding and without their help this article would never have seen the light of day) and was granted the go-ahead from all to start sending it out to some magazines because by then they were afraid of me (yes, kidding again).

But who to send it to? As a group we had thrown around several names to start with, and The Quilter became our first victim for several reasons:

1. Most of us were familiar with it and liked it.

2. It had a good mix of patterns and quilter-interest articles.

3. I am FB friends with one of the associate editor, Natalie Rhinesmith. Had no clue if that would help us, or if it had a thing to do with anything, but the point is FB is a great networking tool. And Natalie is pretty funny.

Off it went to Natalie via yousendit.com, which I shamelessly plug here because it is awesome. Within hours Natalie responded that she had forwarded it to Laurette Koserowski, the editor, and I went on to do other things in my life after promising to the other NEQDC members I would let them know when I heard something, figuring it would be a year.

It was two weeks. We were told they loved it and wanted to put it in the Feb/March issue. From there it was just some copy proofing, contract signing, and joyous jumping from all of us. We were a little bummed when they had to put us off an issue due to space constraints, but no big deal and certainly not unusual in the industry.

Two weeks ago I received my advanced copy and could not even believe how gorgeous the real thing turned out. Even better than the proofs I had seen. I cannot say enough nice things about working with The Quilter - they were so professional, kept us apprised of every step and deadline and change made, and really just made the whole experience of having our first article published a really positive one.

So there's the backstory! We hope to see you at a show this spring or summer!

Posted by Beth at Quilting Hottie Haven at 2:18 PM